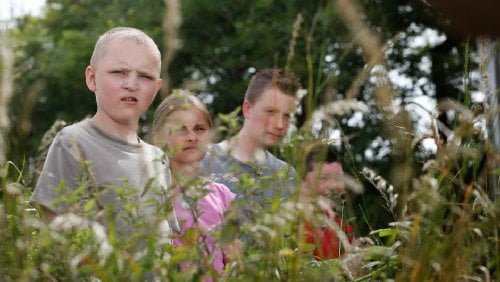 In a French coastal town, a small group of kids observe a wondrous sight, a cow being lifted from an old WWII bunker into a field by helicopter. But Commandant Van der Weyden (Bernard Pruvost) and Lieutenant Carpentier (Philippe Jore) have engaged a local veterinarian and determined that the dead beast has been stuffed with the body parts of a woman. Homicides will continue to stack up as the county sheriff is bedeviled by "Li’l Quinquin."

Writer/director Bruno Dumont ("Hors Satan," "Camille Claudel 1915") is, like Lars von Trier before him, one of the last directors I'd have expected to veer into comedy. His latest, originally aired as a mini-series on French TV, is like Dennis the Menace as reimagined with the darkly humorous shadings of the Coen Brothers, yet, with its literary bête humaine, nonprofessional actors, coastal farmland dissected by winding country roads and contemplation of human evil, distinctly Dumont. It is also hilarious, its first chapter featuring a most insightfully funny funeral, all the while treating its characters with compassion. If there is an off note here, it is in the fourth chapter, where a young Muslim character is bullied into a shooting spree that takes him as its only victim. Young Alane Delhaye is quite the find as the titular character, a descendent of French actor Philippe Léotard with his face of a fifty year-old boxer. Even more astonishing is Pruvost, his real life Tourettes-like syndrome of jerky tics and googly eyes adding to the comedy while also engendering sympathy for the inept detective who makes philosophical comments about his case but does little to actually solve it. When he's not shooting two shots in the air to demand attention, Van der Weyden lectures L'il Quinquin about traffic codes. When the victim is determined to be the wife of local farmer Mr. Lebleu (Stéphane Boutillier), her funeral brings out the entire town, L'il Quinquin an unexpected altar boy, a group of baton twirlers attending in their black and shocking pink sequined costumes. The sister of Quinquin's 'amour' Eve Terrier (Lucy Caron, affecting), who is hoping to get on TV, sings her inappropriate tryout song 'Cause I Knew' with amateurish dramatic flourishes and once again Dumont finds both the hilarity and humanity in Aurélie's (Lisa Hartmann) exposed egotism and ambition. When one of the two officiating priests signals Quinquin to direct the assemblage with his bells, Quinquin gets off on the control, he and the priest almost giving in to fits of giggles as people rise, kneel and rise again. The first episode ends with a new call to Van der Weyden - another cow, another body in pieces. L'il Quinquin is the type to throw a lit firecracker into his exasperated mother's kitchen, yet he shows kindness to his senile gramps (who amuses us with his eccentric table setting skills) and great tenderness with Eve. As the bodies mount, so do small town scandals, but the denizens continue on with their Bastille Day celebrations, singing contests and daily chores. L'il Quinquin is treated to an inexplicable visit from 'Speedy Man,' a neighbor's cousin, and also finds a secret passage to the bunker that explains how that first cow could have gotten there. Dumont never gives us the satisfaction of a crime solved, although his detective does note that everything seems to circle around L'il Quinquin's dad, whose majestic white show horses are a sharp contrast to his neighbors' working cows. Pigs will get into the murderer's act as well, Van der Weyden concluding 'This is hell here. We're going head to head with the devil.' "L'il Quinquin" is easily Dumont's most accessible work while remaining true to his aesthetic. Should he continue the series, which is a possibility, I for one will be back for more. Grade:

The inspiration for Iranian filmmaker Abbas Kiarostami in making “Like Someone in Love” lay in a nighttime drive on a visit to Japan when he saw a young woman in a wedding dress by the side of the road. The image stuck with the writer-director and he created the simple story of a young prostitute and an old scholar and their two-day relationship and makes it compelling. Nothing really happens (well, a couple of shocking moments do occur) but I always waited expectantly for what happens next. Something always does and here it is in the guise of Noriagi (Ryo Kase), supposedly Akiko’a fiancé, but definitely a man with a short fuse. Kiarostami has had a tremendously eclectic career that has spanned over four decades as both director and writer (and many other hats, too). He has expanded to the international market (not just internationally-acclaimed) with his award-winning film from 2010, “Certified Copy,” which felt like a European filmmaker’s work. With “Like Someone in Love,” he makes a distinctly Japanese film with his quiet story of companionship, friendship, a grandfatherly/grand daughterly bond and the volatility and violence (personified by Noriagi) of youth. When we first meet Akiko, it is in the bar that acts as the base for the escort service she works for. She obviously does not want to take her next assignment but debt and paying for college force her to comply – or else. During the hour-long taxi ride to her new client, she listens to her voice mail messages, all from her visiting-for-the-day grandmother who just wants to have dinner with her granddaughter. Akiko will not meet her grandma but has her driver circle the train station in case she can get a glimpse of her granny. Things take a different turn when she arrives at the scholarly apartment of Takashi. She is prepared to go to bed with the much older man but it becomes apparent (to us, if not Akiko) that he simply wants to sit, listen to music, drink champagne, eat a special dinner he prepared for her (which she immediately rejects) and talk. That is all, just talk. Instead, she undresses, crawls into his bed and goes to sleep. The next morning, the air is different and Takashi is suddenly acting like the grandfather and Akiko his granddaughter. And, like a good grandpa, he drives her to school. He promises to wait for her and watches as she goes onto the campus. There, a young man accosts her and Takashi hesitates to intervene. This is the point where things change for the three and “Like Someone in Love” is an intriguing character study of three very different people. In a time, the doldrums of winter, when the multiplex is a dumping ground for Hollywood fodder (many of which begin with “inspired by true events”) it is an unexpected pleasure to see a quality slice of life story simply told and nicely acted. “Like Someone in Love” does not just play, it flows as the story changes and evolves right to the end. It is nice to see a well-crafted work.