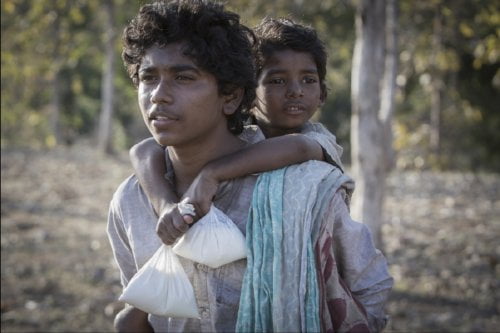 5-year old Saroo (Sunny Pawar) adores his older brother, Guddu (Abhishek Bharate), and begs to go with him to work away from home for a week. After a train journey, Guddu leaves sleepy Saroo on the train station platform, admonishing the boy stay put and wait until he gets back. Saroo falls asleep and, when he awakes, he goes looking for his brother. This begins a journey for the boy that will span continents and decades in “Lion.”

Sunny Pawar is a real find and his journey is compeling, but the film bogs in its second half when Dev Patel takes over, despite the intriguing use of Google Earth to find Saroo's home.

This is a true life story adapted into a novel by Saroo Brierley and Larry Buttrose, then adapted into a screenplay by Luke Davies for first-time feature film director Garth Davis. The result is a mini-epic about the life of one lost Indian boy who awakens on an empty train and finds himself alone in Calcutta, thousands of kilometers from his family. Saroo’s survival on the mean streets of a strange, often hostile, city, too me, is the best part of “Lion,” and little Saroo proves himself to be that lion. When Saroo is adopted by Sue and John Brimley (Nicole Kidman and David Wenham), who raise the boy as their own, giving him everything he lacked in his past life. Saroo grows into a young man (Dev Patel) who has not forgotten his family in India. These memories are the catalyst that propels him to return to India and find his way home. This begins the tedious process, encouraged by his friends and, especially, his girlfriend Lucy (Rooney Mara), of back tracing from Calcutta to his home – until he finds Google Earth. After this discovery, we move on to Saroo’s incredible journey back to his past life and the family he lost. Tyro feature director Garth Davis does a solid job in telling Saroo’s story from the days he spent with the brother, who he idolized, and his loving mom, who he adored, raising her three children in poverty. This harsh life is put into contrast when Sue and John bring the boy into their home. His new life is complicated when his new parents adopt another Indian boy, troubled Mantosh (Keshav Jadhav), who does not adapt to his new surrounding as well as Saroo. “Lion” spans decades but it jumps, mostly, through Saroo’s formative years living in Hobart, Tasmania, bringing us quickly to grown up and conflicted Saroo. Dev Patel gives an earnestly serious performance as a young man in search of his past and his real family. But, to me, the heart of the film is in the beginning with little Saroo, his brother and his mother. His arduous and dangerous life as a little boy alone in a big, scary city is fraught with both fear and hope as adults show kindness, but not always benevolently. “Lion” is a good calling card for the new director and it gives Dev Patel a chance to embody his character and his resolve to return to the past, despite what he might find.