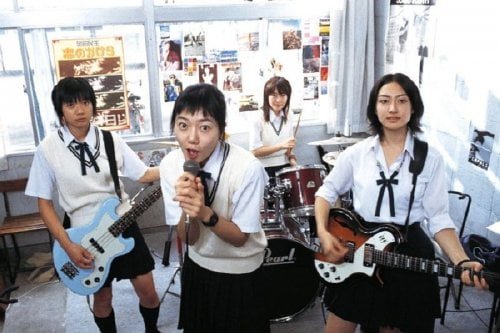 With three days to go before the Shiba High Holly Festival closes out their senior year, the all girl band Paran Maum is in turmoil - founders Kei Tachibana (Yuu Kashii) and Rinko (Takayo Mimura, "Battle Royale") are no longer speaking since they couldn't agree on a direction after guitarist Moe (Shione Yukawa) is sidelined due to injury. Kei takes up the reins, switching from keyboards to guitar and on a whim, Korean exchange student Son (Doona Bae, "The Host") is enlisted as their vocalist to perform Japanese punk group The Blue Hearts' "Linda Linda Linda."

Cowriter (with Kôsuke Mukai & Wakako Miyashita)/director Nobuhiro Yamashita has not only made a paean to Japan's most famous punk band, but to the bittersweet last days of high school and the cultural differences between Japan and Korea. Not all the jokes and nuances of this gentle, funny film may be apparent to Western audiences, but many of them, particularly those involving Son's translation mishaps, will. Doona Bae shines as the adorably awkward teenager who's never met a stage she's afraid of. Everyone has their own little intrigues. Besides Kei's ongoing falling out with Rinko, she's trying to step up on guitar and deal with her ex to get the band studio time. A former student and ace musician running a school rooftop 'cafe' offers inspiration. Drummer Kyoko (Aki Maeda, "Battle Royale") is pulling double duty with the band and a festival food stand where she is partnered with Kazuya (Katsuya Kobayashi). The two are uncomfortably crushing on each other. Son can't understand why she must buy something she doesn't want to eat or drink in order to sing at the local karaoke joint and hilariously botches Nakajima's (Yuko Yamazaki) attempt to woo her. Bassist Nozomi (Shiori Sekine) conducts a supermarket expedition on a budget. The girls continuously fall asleep in practice and are so exhausted by their big day, they not only almost miss it but end up performing soaking wet. "Linda Linda Linda" is one of those films of small, everyday moments all adding up to a bigger picture. The film is bookended by some absurdly sincere filmmaking students' attempts at creating a festival commercial which, in the end, sums everything up. The festival itself is a delight to observe with its noodle booths and massage stands and 'bull darts.' Son and Kei's thanking of each other for their shared experience is a touching end to what began, at least on one side, as a whim. The DVD includes a lot of information, not only on the importance of The Blue Hearts in punk rock history, but that the word for 'crazy' or 'nuts' is so akin to swearing in Japan that when The Blue Hearts brazenly used it, they were banned. We also learn that the scene between Son and Nakajima was an example of Kokuhaku, a confession of love that's like a rite of passage. "Linda Linda Linda" is a charming film that doesn't follow any particular pattern and Doona Bae, in particular, with her wide surprised eyes and blunt manner, is comedy gold here.