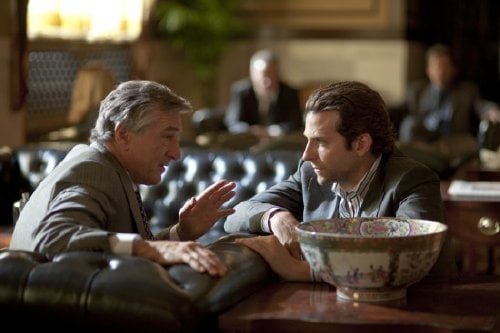 Eddie Morra (Bradley Cooper) is a writer whose career is going under when his shifty ex brother-in-law offers him NZT, a top secret drug that enables its user access to 100% of his brain. Eddie flies on the stuff, distant memories becoming new expertises, but as he parlays his new talents into a Wall Street fortune working with mogul Carl Van Loon (Robert De Niro), he starts suffering blackouts while also being hunted by shadowy underground types. Morra finds there are drawbacks to being "Limitless."

Here's a high concept that doesn't feel like it's been done before - a drug that's high comes via the I.Q. variety but with addictive properties that lead to blackouts, sickness and even death. Director Neil Burger's ("The Lucky Ones") hasn't forged a cinematic identity, but with "Limitless" he brandishes a new, tricked up visual style. Paul Leonard-Morgan and Nico Muhly's propulsive score gives the pace a quick and steady beat but lead Cooper doesn't have enough heart to give the film an emotional pulse. Eddie, his hair uncombed, his clothes disheveled, has just been dumped by his girlfriend Lindy (Abbie Cornish, "Bright Star"), untethering her rising star from a man clearly going under, when he runs into Vernon (Johnny Whitworth, "3:10 to Yuma"). When he admits his troubles Vern pushes a clear little pill to solve his problems. Eddie's wary, but Vern says not only is it FDA approved, but it's worth $800. What the heck. Back home, Eddie advises his furious landlady on her law school thesis, beds her, cleans his apartment from top to bottom and rights enough of his contracted book to blow his editor's socks off. Needing more pills, he shows up at Vern's only to find the guy beaten up. When he returns with coffee, Vern's apartment has been ransacked and he's very dead. Using the remnants of his jacked up brain power, Eddie finds the stash the intruders could not find. A new idea gets Eddie hooked up with a job as a day trader where he turns $2,000 into two million in no time. But in needing money to make it, Eddie goes to Russian thug Gennady (Andrew Howard, 2010's "I Spit on Your Grave") who quickly horns in on Eddie's NZT. When he starts flying high in the corporate world, the pitfalls of the drug and the network it supports get more and more lethal. The film's visuals pop, literally raining letters as Eddie writes, ceiling tiles flipping into Wall Street stats as he figures out his trading algorithm. Whenever he pops another pill, colors brighten, his hair gets blonder, the world moves faster. When Eddie's faced with a new challenge, like being threatened in the subway, his mind whizzes through relevant information accumulated since childhood, all there for the picking. On the flip side, the world gets grayer, its users more wizened, as the drug wears off. When Eddie finally convinces his ex, Melissa (Anna Friel, "You Will Meet a Tall Dark Stranger"), to meet him, he's shocked at her aged, sickly appearance, another former NZT user. Cooper's fine as long as Eddie's in slick operator mode, but he doesn't give the character any depth. Cooper's opening narration accentuates just how characterless his voice is. Without those startlingly blue eyes there's not much there there. One wonders how Abbie Cornish ended up with the girlfriend role here - Cooper's no match for her. Cornish develops her character more in one scene than Cooper does in the whole movie. As the film's most obvious villain, Andrew Howard walks away with every scene he's in, building in intensity along with his NZT use. His delight in discovering the word 'fillet' is chilling. In a supporting role, De Niro's better than he's been in some time here, particularly delivering a speech to Eddie as to why he's in no position to compete with him. "Limitless" is jazzy entertainment and its conclusion doesn't go where one might expect, but its achievements are only skin deep.