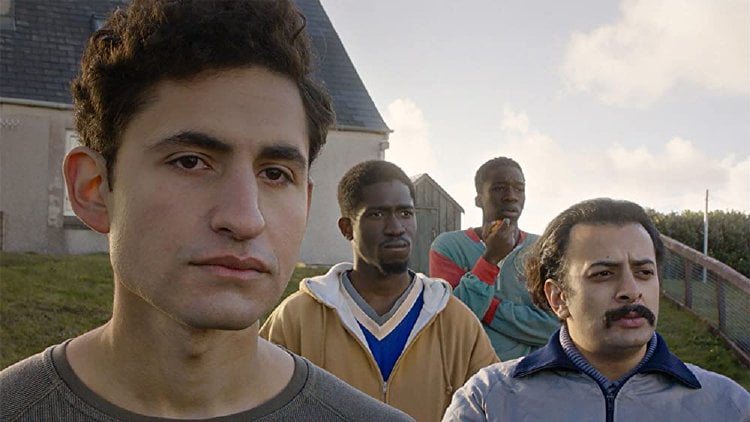 The heavily accented Helga (Sidse Babett Knudsen, "The Duke of Burgundy," "In Fabric") performs a provocative dance with Boris (Kenneth Collard) in front of a class of perplexed male students, most who sit with mouths agape.  As we note ‘Cultural Awareness 101’ written on the blackboard, Helga stops, slaps Boris and asks the class ‘What did Boris do wrong?’  Only one of the assembled Middle Eastern and African men raises his hand.  They are all refugees waiting to hear their fates on Scotland's remote Western Islands.  One of them, a sad-eyed Syrian musician, Omar (Amir El-Masry), is worn down from being in “Limbo.”

Writer/director Ben Sharrock’s second feature is a humorously deadpan exploration of the refugee experience that resembles an Aki Kaurismäki movie with a sprinkling of Bill Forsythe’s Scottish “Local Hero” flavor.  Sharrock’s ability to shift tone also enables him to examine the more serious and even heartbreaking aspects of his characters’ histories and predicament, but the melancholy undertone never drags the film down.  “Limbo” is one of the best films to emerge so far in 2021.

We learn a lot about Omar when he calls his mother in Istanbul from the wintery island’s lone phone box.  His older brother Nabil (Kais Nashif, "Tel Aviv on Fire") stayed behind to fight the good fight, causing a rift which sits heavily on the younger man.  He carries around his grandfather’s oud (a traditional string instrument), but feels no urge to play it, at least before he learns his parents invested most of their finances in him to forge a better life, ironic given that he is banned from seeking employment.  He yearns to taste his mother’s special stuffed peppers, but when Omar asks the local Pakistani grocer if he carries sumac, he’s informed that the only spices available are ketchup and mustard and is given a lesson on racist English slang.

Omar’s already gotten an ear load of that from four local teens who accuse him of terrorism and rape before good-naturedly offering him a lift (Sharrock’s comic painting of the locals’ racism as unwitting naiveté or curmudgeonly defiance is a fine line he walks skillfully).  Everything about Omar’s current existence is bizarre and alien.  He lives in a home with three roommates, the upbeat Afghani Farhad (Vikash Bhai) who steals a chicken as a pet and binges on bootleg ‘Friends’ DVDs, and Wasef (Ola Orebiyi, "Cherry") and Abedi (Kwabena Ansah), a Nigerian and Ghanaian whose pose as older and younger brother, forged to gain advantage during their journey, has sad consequences for both.  Sharrock turns their outdoor observation of the Royal Mail van’s progress into comedy gold when he’s not doing the same indoors as Omar and Farhad watch their roomies argue.  The filmmaker is also adept with visual symbolism, like when Omar is asked to help search for lost sheep during a whiteout.

The film is shot (cinematography by Nick Cooke) in the static Kaurismäki style, the camera only panning for stark landscapes set to music.  And it is music that pervades Sharrock’s third act, Omar reconnecting with his instrument at the urging of his brother, his mastery of it confirmed in the film’s closing moments when Omar’s otherness is what folds him into this unique landscape.  El-Masry’s dejected air combined with Bhai’s optimism makes for a unique odd couple which embodies the film’s mood.  “Limbo” reflects the loss of culture and alienation experienced by refugees with wit, humor and deep wells of compassion.


"Limbo" begins a limited theatrical release from Focus Features on 4/30/21.