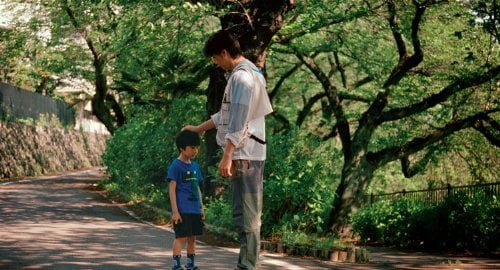 At a family interview at the 'cram' school the Nonomiyas have enrolled their six year-old, Keita (Keita Ninomiya), in, Ryota (singer/songwriter Masaharu Fukuyama) says the boy most resembles his mother, Midori (Machiko Ono). Maybe that's because the workaholic architect spends so little time at home, but a few days later Ryota must reevaluate just what being a father means when they get a phone call from the rural hospital where Keita was born in "Like Father, Like Son."

Writer/director Kore-eda Hirokazu ("Nobody Knows," "I Wish") has examined the dynamics of families split apart since 1995's "Maborosi," but this time, as the father of a 5 year-old himself, the project's more personal. We expect great acting and careful composition in Kore-eda films, but this time around the message, while still affecting, is also a bit plodding and heavy handed. Remember all those lawsuits a while back in which birth parents sued to get their children back from their legally adoptive parents? While not quite the subject here, I remember feeling more sympathy for the loving men and women who were faced with giving up a child they had raised than the parents who were willing to throw an emotional wrecking ball into the midst of a family that included their own biological offspring. In "Like Father, Like Son," Kore-eda explores 'nature vs. nurture' from many angles, but the film is really how Ryota's journey gives him the internal insights which bring us to the expected conclusion. The thing of it is, Ryota's not exactly the greatest guy. His ideas on parenting make him look a bit like the Japanese male version of the Chinese Tiger Mom. When he and Midori learn that they have been raising another couple's child and that that couple have been raising theirs, he lashes out at both his son ('That explains things...') and his wife. We quickly find out that Midori chose the hospital because her husband was never home and she wanted the support of her mother. When the Nonomiyas meet the couple who have their son, Ryota's behavior becomes even worse. Yudai and Yukari Saiki (Rirî Furankî and Yôko Maki, "The Grudge") are, like Midori's mother, not urban sophisticates. They live above Yudai's run down appliance store where he seems to do little in the way of actual work. Yudai is excited to take advantage of the hospital's error for financial reward, like expensing a 'splurge' of a meal at a mall food court, something which plants a seed in Ryota's mind. After Ryota's family-supportive boss (Jun Kunimura) gives voice to it, so does Ryota, much to Midori's embarrassment. The experiences of the boys, who have been 'swapped' on Saturdays by the two families (Ryusei is the eldest of four, adding another level of complexity), tell yet another story. Kore-eda appears to have taken the rather simplistic path of 'money does not buy happiness,' until Ryota visits his own father, a man he is estranged from and we're surprised by what he finds. He treats his stepmother, Nobuko (Jun Fubuki), who caters to her hard-drinking husband, rudely. But while Kore-eda may have focused on fathers, he gives ample time to the mothers as well and it is their behavior - both Midori and Yukari - who give Ryota an epiphany of sorts. Midori, who at first has seemed like the cliche of a submissive Japanese wife, becomes stronger and more vocal, even if she doesn't overtly challenge Ryota's decision. Yukari is more adept at welcoming her actual son (this, in large part, due to the messy, colorful aesthetic of her home and its communal bathing practice vs. the Nonomiyas' stark, modern expanse which is compared to a hotel). Only Midori's mother (Kirin Kiki) indulges Keita's love of WII tennis, and play becomes an important breakthrough factor for Ryota (the actor and his director ensure he looks awfully awkward, if enthusiastic, giving it a spin). If, like me, you find that the decision to be made here has an obvious solution, "Like Father, Like Son" takes it time arriving at it. But it is the way in which Ryota comes to understand the way fathers shape their sons that makes "Like Father, Like Son" worthwhile.