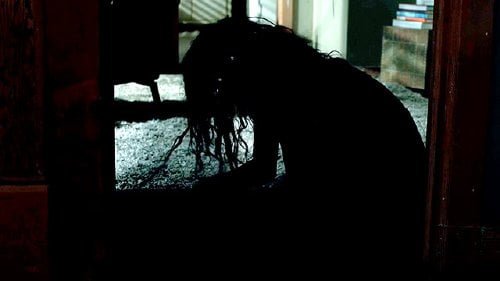 Martin (Gabriel Bateman, TV's 'American Gothic') calls his dad, Paul (Billy Burke, "Twilight"), at work begging him to come home. He says mom (Maria Bello, "Prisoners") isn't doing well and is 'talking to herself.' But Paul doesn't make it home that night, attacked by the malevolent spirit Diana (Alicia Vela-Bailey) that has attached herself to his wife Sophie. When Sophie's estranged older daughter Rebecca (Teresa Palmer, "Wish You Were Here") gets a call from Martin's school because he's been struggling to stay awake, she revisits the childhood horrors she encountered at "Lights Out."

Director David F. Sandberg makes his feature debut with Eric Heisserer's ("Final Destination 5") adaptation of Sandberg's short of the same title (you can view it here). But something dreadful's happened in opening up the truly unsettling short film. By attempting to give the creature which only exists in the dark a back story, "Lights Out" twists itself into silly psychobabble knots while setting itself up not only for a sequel, but a prequel! The short relies on scaring up our fear of the dark, but the feature leans on too many films which have come before. "Mama" used a similar concept and marrying mental illness with the supernatural, which can be effective if done well, is a subgenre unto itself. The current horror trope (lifted from the "Paranormal Activity" series) of a person being quickly dragged out of the frame by an unseen entity is also wearing out its welcome. Some risible dialogue doesn't help matters, but the cast is better than the material they've been given to work with. The original short's star, Sandberg's wife Lotta Losten, returns as Paul's assistant, the first person who gets a glimpse of Diana in the shadows of the textile warehouse and who tries to warn him. As commitment phobic Rebecca's boyfriend, Alexander DiPersia's ("I Am Legend") attempts to secure himself in her life are endearing. Maria Bello ("Prisoners") certainly looks the part of a depressive hanging on by a thread, but she's saddled with her character's ridiculous ties to Diana. Palmer is fierce, Rebecca's maternal instincts coming into play as her mother's come into question. Stunt woman Vela-Bailey, with her long tapering fingers, presents herself in creepy contortions, but what we eventually see (via blacklight) loses the impact she's created in shadow. The only real inventiveness on display here is in how many ways someone can outwit a creature that not only depends on darkness, but has the ability to mess with electrical power. The movie's opening shot, a blinding closeup that zooms out to reveal a streetlight, is one of its best. Benjamin Wallfisch's score alternates between melancholy bell tones and violins for character themes and orchestral histrionics to punch up the jumps. The preview audience I saw the film with seemed to get into it, screaming in all the right places, but a good horror film can get under my skin and when I got home, I walked around in the dark with nary a care. Skip the feature, but check out the short it was based on. Grade: