Lights Out (Simon Werner a disparu…) 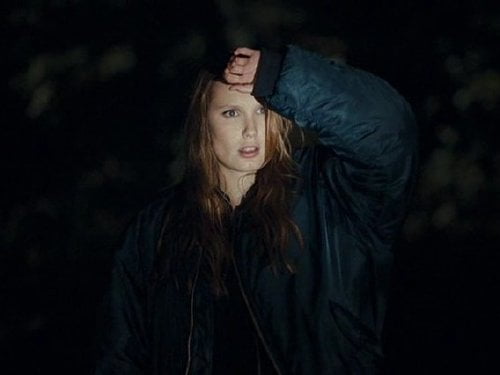 Simon Werner disappeared, without a word, but with traces of his blood left behind in a classroom. Two weeks later, during a drinking party, some teenagers find a dead body nearby. Another student disappears and, then, another and rumors spread and panic grips the town in “Lights Out.”

Simon Werner (Laurent Delbecque) is considered odd, but envied for dating the most beautiful girl in school, Alice Cartier (Ana Girardot). When he disappears, rumors begin to circulate, including one that he was having sexual relations with physics teacher Rabier (Serge Riaboukine, "Time of the Wolf," "Angel-A"), the single father of Simon's classmate Jean-Baptiste (Arthur Mazet). Tensions mount when first school punk Laetitia (Selma El Mouissi), then Jean-Baptiste also go missing, but a party at the home of soccer player Jérémie Legrand (Jules Pélissier) proceeds anyway, until a grisly discovery is made in "Lights Out." ("Simon Werner a disparu...") Writer/director Fabrice Gobert makes his feature debut with a tip of the hat to an old French film, the structure of Tarantino's "Pulp Fiction" and a soundtrack by Sonic Youth. The filmmaker proves adept working with a young cast, shifting points of view and juggling time lines, but the solution to the central mystery is deflating. Once Simon's fate comes to light it's as if he never existed in the first place. But then again, we've been warned, as Latetitia notes that 'the truth can be disappointing.' The film is divided into chapters named after various characters. The first, Jérémie, lays down a general understanding of the story from a student body character outside the action except for his interest in Simon's abandoned girl. As each additional character's point of view is added, the film begins to show new scenes interspersed with those we've seen before, but new information is gleaned each time. By the time the film ends, we've seen how impressions can be falsely made. Perception is all but it is not necessarily the truth. But the film sets its audience to expect a mystery and, while it is one, it's not a very satisfying one. "Lights Out" works more as a character study of high school life. Gobert clearly has filmmaking chops, but hasn't established uniqueness of vision.

First time feature film writer-director Fabrice Gobert, with his teenage cast, weaves an intricate mystery tale that begins with the muttered announcement among the local high school students that “Simon Werner has disappeared….” The story is then divided into chapters named for the central character of each. “Jeremie” follows that character (Jules Pelissier), the soccer jock who breaks up with his beautiful girlfriend, Alice (Ana Girardot), then breaks a leg while playing in a game. This chapter lays the ground work for the others that follow as, each – “Alice,” “Rabier” and, finally, “Simon” – tells the same story but from each character’s point of view. Things are not what they seem, though, in this mystery-detective story. It is an intricate weaving of the several POVs and belies the novice status of Fabrice Gobert. There is maturity in the direction and writing which harkens well for the newbie filmmaker. The youthful ensemble cast is made up with talented young actors that flesh out their characters. Most feel of the appropriate age but Ana Girardot has an ethereal beauty that is disturbingly mature and out of place with the other, more normal appearing actors. The actress floats and glides through her scenes, giving Alice a surrealistic feel that is almost disturbing. The combination of slick, detailed writing and deft directing of the young stars make this a calling card film that will open many doors for Gobert.