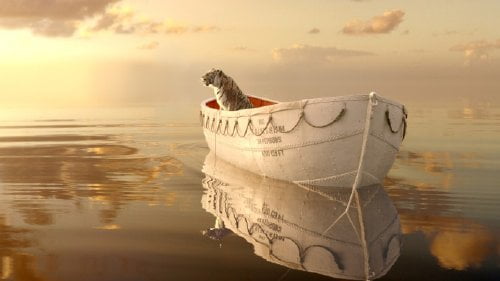 Pi Patel (Suraj Sharma) is precocious young man whose parents own a zoo in Pondicherry India. They decide to sell the zoo and transport the animals to Canada for sale. During a violent storm, while crossing the Pacific Ocean, the ship they are on board founders and Pi is washed overboard. He sees the ship sink and struggles to get into a lifeboat. Once there, he finds the strangest of company – a zebra, a hyena, a baboon and a tiger! – and we learn all about the “Life of Pi.”

In Montreal, Piscine Militor Patel (Irrfan Khan, "Slumdog Millionaire") entertains a writer (Rafe Spall, "Anonymous") who has been sent to hear his story as a possible book project. Pi begins at the beginning, telling about a glorious childhood spent living at his father's (Adil Hussain) zoo in Pondicherry, India, the history behind his unusual name and the monumental effort he had to make to get the schoolyard nickname bestowed upon him changed to the current 'Pi.' But his tale attains epic status when his family decide to emigrate to Canada aboard a freighter that sinks in the Pacific, leaving him on a 26-foot lifeboat with a zebra, a hyena, an orangutan and a 450-pound Bengal tiger named Richard Parker in "Life of Pi." Adapting Yann Martel's hugely popular novel into a film, one which largely takes place at sea on a small raft with wild animals and flashes of fantasy, must have been a daunting task and director Ang Lee ("Crouching Tiger, Hidden Dragon," "Brokeback Mountain") succeeds in the visual sense of the medium. The film, which was largely shot in the world's largest self-generating wave tank, is more an accomplishment of Visual effects (supervised by "The Chronicles of Narnia's" Bill Westenhofer) than cinematography and is often utterly glorious to behold. But while the story, adapted by David Magee ("Finding Neverland"), holds one's attention, some of the narrative magic has been lost, largely due to a clunky framing device and a verbal insistence on spiritual meaning which the movie fails to summon emotionally. Ironically, Lee replaced Tobey Maguire as his initial writer, claiming the actor's celebrity would be a 'distraction,' but Maguire's replacement, Rafe Spall, is distracting for entirely different reasons - none of his scenes with Khan feel the least bit natural. Things look upward when we're thrown into flashback mode, marvelling at the beauty of Pondicherry and hearing family lore that recalls the quirkiness of "Amelie's." The young Pi takes great interest in religions outside his own, encouraged by his open-minded parents, and considers himself a Hindu Catholic Muslim Buddhist, but when he tries to make 'friends' with Richard Parker, the zoo tiger, he gets a harsh life lesson from his father about the danger of the beast. The film was mostly shot in the world's largest self-generating wave tank in Taiwan and the effects work is impressive, beginning with the sinking of the Japanese Tsimtsum. Some of the animals which have accompanied the Patels are loose, Pi swims underwater to save his family as a terrified zebra goes by, lifeboats pitch and sway as the ship takes on more and more water in a horrific storm. When all is said and done, Pi finds himself alone on a lifeboat except for the zebra which has injured itself leaping aboard from above deck and the friendly orangutan and nasty hyena which emerge from one tarp-covered end. Then Richard Parker, that Bengal tiger, swims up and clambers aboard. Only the tiger survives and so does Pi, having been quick-witted enough to construct a raft to keep some distance from the boat he's tied to. Months are spent at sea where Pi must keep both himself and the tiger fed and watered while witnessing a series of spectacular events, like flying fish, a breaching whale and a fantastical banyan tree island full of meerkats. Use of 3D is most impressive as the film's opening credits roll against a montage of zoo animals amidst their botanical settings, a tapir's nose unfurling out to greet us. The animals at sea are almost entirely created via computer and rarely do they seem anything but real. The film's most startling shot - a sympathetic shot of Richard Parker's anguished face as he hangs over the side of the lifeboat - is somehow anthropomorphized without appearing to be. The sky, however, is usually so magical looking that when Lee chooses a more natural backdrop of plain pale blue, it can be jarring. The themes of the book are both spiritual and psychological and it is here that Lee doesn't make the hurdle he's set for himself. One should feel moved by life's mysteries and one is not and the psychological aspect hasn't been established well enough in the narrative. If you're wondering why the great French actor Gérard Depardieu was cast for a brief bit as a nasty cook, you'll need to wait and have it explained to you at film's end. "Life of Pi" is a monumental technical achievement which satisfies as an astonishing adventure but fails to achieve deeper meaning.

I go into most films with some idea of what they are about. Not so with this adaptation of Yann Martel’s 2001 novel of the title. My sole knowledge of the story comes from the few 30 second TV spots I saw prior to seeing “Life of Pi.” As such, with those fantastical images of a boy surviving on the high sea, stranded, with a larger than life tiger, I expected a fantasy film par excellence. We get the fantasy element but, under director Ang Lee, it is grounded on one man’s imaginings about a tragic and harrowing time in his life as an older Pi (Irrfan Khan) tells his story to a young writer (Rafe Spall). “Life of Pi” is a film of beautiful images as Pi is thrust into events that he is not prepared for. When he first struggles getting aboard the life boat, he is startled to find he is sharing his safe haven with a badly injured zebra, a ravenous hyena and a frightened baboon. Pi tries to keep peace on the boat and is not too successful when another victim of the sinking climbs in – the zoo’s tiger, Richard Parker. The seating arrangements soon sort themselves out, leaving Pi alone with the tiger. The remarkable thing about “Life of Pi” is that most of its 127 minutes centers on Pi and Richard Parker and their survival during the months lost at sea. The beginning of the film, with Elder Pi and the writer talking about his life of mystical wonder growing up in a zoo family, sets the stage for what is to come. Pi’s family – mother (Tabu), father Adil Hussain and younger brother (Ayan Khan) – decide to move to Canada, leaving his love interest (Shravanthi Sainath) standing on the dock. It is an adventure for the young man, though, especially when the ship runs into a massive storm and he foolhardily goes on deck to brave the elements. His world will, literally, turn upside down. This is a real two hander with Suraj Sharma and his feline costar centering the film and the young actor does a fine job at was must be a physically demanding performance. The bookending and bridges of elder Pi and the writer as they talk about the adventure, despite Irrfan Khan’s charismatic presence, takes the steam out of the survival fantasy but, I imagine, is true to the book. The man and beast survival tale, though it is on a lifeboat and jury-rigged raft for nearly two hours, is fascinating to watch, especially with the stunning photography, lighting and colors that make a visual feast. Director Ang Lee’s deft hand at the helm (with, of course, his outstanding behind the camera crew) makes for an original fantasy that is actually two stories in one. In the end, you decide which is true.