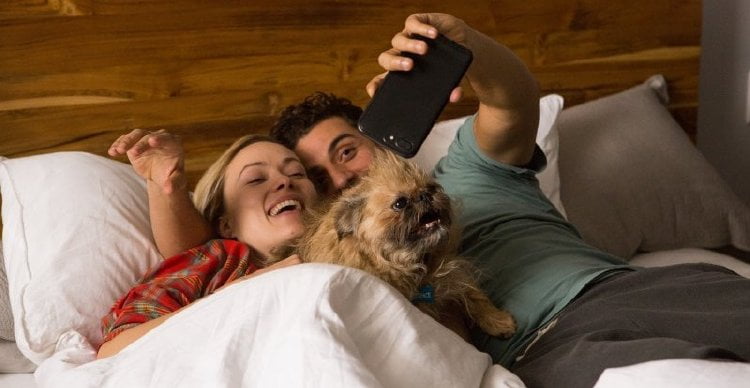 When Abby (Olivia Wilde) asks Will (Oscar Isaac) when he plans to ask her out at a college bash, his answer is so striking, she flushes with pleasure. But later, when he asks her to marry him, she's concerned that the intensity of his emotions may overpower her. Indeed, their lives are visited with tragedy, but their spirits embody "Life Itself."

Writer/director Dan Fogelman proves that gimmicks like his all-these-people-are-connected surprise of the 'This Is Us' pilot work when they can be expanded upon on TV but not when that's all he's got within a theatrical run time. This overly contrived bit of sentimentality goes exactly where we expect it to despite attempts to distract us with 'character defining' themes and visual razzle dazzle which does nothing to expand its characters or story. Fogelman's assembled a strong cast only to let them down with underwritten or overly melodramatic roles. The film opens with a bit of trickery, a series of false starts revealing its narrator, Samuel L. Jackson, as unreliable, one of the film's repeating themes. Will and Abby's story is relayed in flashback by the present, clearly unstable Will to his psychiatrist Dr. Cait Morris (Annette Bening). Will was over-the-moon crazy about his wife before she left him, thinking her failed thesis on unreliable narrators brilliant and sharing a love for all things "Pulp Fiction" even if he didn't quite get on board with her Bob Dylan obsession. Marriage brings a dog and a pregnancy, but one day, after his embarrassingly blunt mom's (Jean Smart) meatloaf dinner, their bliss is cut down dead in its tracks. The film is divided into chapters whose characters overlap, picking up again with Dylan (Olivia Cooke), Will and Abby's twenty-one year-old daughter, brought up by her paternal grandfather Irwin (Mandy Patinkin), who now despairs of getting the punk musician into college. The tale then crosses the ocean to Spain for the initially unrelated story of Javier (Sergio Peris-Mencheta, TV's 'Snowfall'), a simple olive farmer whose promotion by wealthy landowner Saccione (Antonio Banderas as the son of a rich man looking vaguely troubled in his fine leather shoes) enables him to wed his love Isabel (Laia Costa, "Victoria"). They have a son, Rodrigo (Àlex Monner, Adrian Marrero as a child), whose childhood trauma on a family vacation will connect the dots back to Will and Abby. There is little amiss with the performances here. Isaac is quite affecting as the emotionally undone Will. But Fogelman isn't content to ladle on one horrific incident if he can compound the situation by a factor of ten. Abby's background, related by Will, is so horrific, her sunny, adult adjustment makes little sense, just as Will's memory producing a dozen Abbys having snowball fights with herself in a college quad adds nothing to our understanding of either of them. Things go more off the rails when the story's airlifted to Spain. Saccione tries to connect with the worker he admires by telling a back story of so little consequence to us it is no wonder Javier's not impressed either. Peris-Mencheta brings the same gentle giant quality to his character he brings to 'Snowfall's" Mexican wrestler, but he fails to help us understand the motivations Fogelman has neglected to give him. Costa is very affecting, her performance outclassing the film. Fogelman ladles on the cutesy flourishes, like the unprintable name of Abby and Will's dog or calling Dylan's band after her favorite childhood sandwich (the producers of "Patti Cake$" will not be amused). Her musical chops bear no resemblance to her namesake's. Pregnancy is used for both wonder and tragedy before jumping the shark altogether with the character of Shari Dickstein (Isabel Durant), Rodrigo's thoroughly obnoxious American girlfriend. Everything is tied together at tale's end through the new character of Elena (Lorenza Izzo, "Knock Knock," "The Green Inferno"), using the device of a book reading to bookend the film's literary themes. But the overly pleased with itself "Life Itself" is as deep as a beach read, its pots boiled over. Grade: