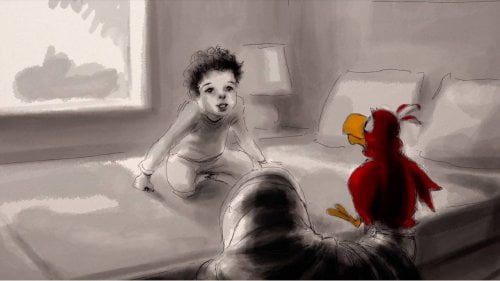 At the age of three, Owen Suskind stopped talking. After examination, his Pulitzer Prize-winning dad, Ron, mother, Cornelia, and older brother, Walt, learned that the boy is autistic and were in despair. One day, after the long silence, while watching a favorite Disney animation, “Aladdin,” with Walt, he blurted out a line of dialog from that movie. This one sentence gave the family hope to get their Owen back in “Life, Animated.”

When his son, Owen, was 3, Wall Street Journal writer Ron Suskind played Hook to Owen's Pan, fighting with tree branch swords in the family's yard. Then something happened. Owen stopped sleeping, his motor skills deteriorated and his speech devolved to gibberish. After receiving a diagnosis of autism, Ron and his wife Cornelia didn't know if Owen would ever speak again when, one day, Ron realized that his son was repeating a line from Disney's "The Little Mermaid" in "Life, Animated." Based on Ron Suskind's book, Roger Ross Williams' documentary projects the parental love which drove Owen's emersion from his over stimulated brain (the piece does a good job of explaining what autism sufferers experience). But the Suskind's elder son Walter points out one major drawback of their chosen path of 'Disney therapy,' when, attempting to discuss sex with his now twenty-three year old brother, he is stymied by Owen's Disneyfied perspective. Owen further surprised his parents when, at six, he observed Walter's dejected form outside after his birthday party guests had left. 'Walter doesn't want to grow up, like Peter Pan or Mowgli.' They were astonished. It was his first complex sentence and once again, Owen had found empathy through his one interest. Ron approached his son's room and, spying his beloved Iago parrot hand puppet on the floor, used it, and Iago's voice, to have his first real conversation with his son. It's a startling moment, Williams hiring French animators to recreate it in soft, sepia toned style. Williams jumps around in time, actually beginning the doc with Owen at his Cape Cod special school in the not too distant past. Later we see he's formed a Disney Club there, one in which the voice of "Aladdin's" Jafar, Jonathan Freeman, and the voice of "Aladdin's" Iago, Gilbert Gottfried, make an appearance, much to the delight of their fans. One of them is Emily, Owen's girlfriend, who gifts him with a Mickey Mouse cord necklace, one which causes much upset when temporarily lost on moving day. "Life, Animated" has worked up to Owen's independence, a prospect which both worries and excites him. Owen, who's memorized every Disney film, returns to favorites that fit his current mood, never more poignantly than when he watches "Bambi's" opening scenes on his first night alone (except for the filmmakers, whose unseen presence is difficult to shake) in his new apartment in an assisted living community. 'Mother, where are you?' asks the frightened fawn. (Oddly, the fact that all of Owen's Disney movies are on VHS is never mentioned.) The boy who was bullied in high school writes his own fan fiction, 'The Land of the Lost Sidekicks,' in which he becomes the protector of characters like "Mermaid's" Sebastian, "Aladdin's" Apu and "The Jungle Book's" Baloo (also visualized with more colorful animation). Then harsh reality steps in when Owen miserably reports that Emily, who had moved into the apartment above him, has broken up with him after three years. We learn that this happened with several counselors present, Emily expressing a need for 'space.' But was it Walter's well intentioned sex talk that brought this about? It remains a mystery. Yes, Disney brought Owen back, just as other obsessions have allowed autistic youngsters to find a foothold. But it is Walter who is the most sympathetic character here, as he worries about his aging parents and the brother who requires so much care. We leave Owen with a part time job taking tickets at a Regal Cinema. Will the theater's multiple screens broaden his perspective? That, too remains unanswered. With the myriad clips from Disney movies on display, one can't help noting that this inspirational tale feeds the Disney corporate machine. Grade:

Ron Suskind’s New York Times best-selling memoir Life Animated: A Story of Sidekicks, Heroes and Autism is the launching point for the tyro documentary feature by director Roger Ross Williams about family and autism. Fortunately for Owen, Ron’s job on the Wall Street Journal and authoring of a number of best-selling books allows the family to give the now young man the support and therapy he needs to overcome his debilitating autism. This made me think, while watching the film, about all of the others suffering from autism whose families do not have the resources that the Suskind family does. Just thinking. In any case, the film is an encouraging look at how one family dealt with their child’s autism, Think of autism as all the filters in your brain that sort out all the noise around us are suddenly turned off. Nothing makes sense to the autistic child and they mentally and physically shut down. Owen’s first breakthrough is followed, later, when he tells his father that his brother is sad. “He doesn’t want to grow up, like Mowgli and Peter Pan.” This cognitive behavior, something lacking in Owen for years, reinforced his family’s decision, against professional advice, to use his love and passion for Disney animations to help him communicate and live in the “normal” world. The family would recite the dialog, in the role, of Disney characters, prompting Owen to speak back the next line. This put Owen on the road to make his way in the world: graduating school, leading a Disney Club with other autism patients, moving into his own assisted living apartment and having a girlfriend. He also began drawing his own cartoon characters, including his alter ego, the Protector of Sidekicks. “Life, Animated” does give hope to those also afflicted with a disease that, normally, has no hope. Its heart is in the right place, but I felt the presence of the filmmaker throughout the film. This is indicative of a novice documentary filmmaker, something that should diminish with experience. Think Frederick Wiseman for someone who puts you, not him, in the moment.