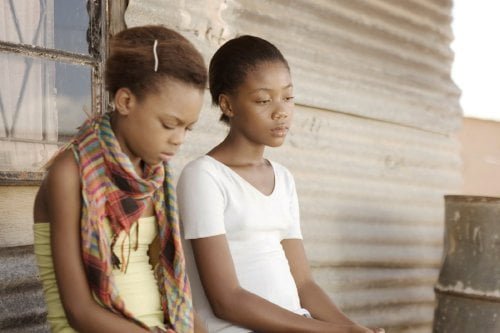 In a small South Africa town on the outskirts of Johannesburg, Lillian (Lerato Mvelase), the mother of four, sits in a room moaning in grief as she rocks the lifeless body of her youngest, baby Sarah. Her eldest daughter, Chanda (Khomotso Manyaka), has to take charge of the family’s affairs and makes the necessary funeral arrangements. But, the death is met with fear and loathing by the neighbors and the young girl and her family face ostracism and worse in “Life, Above All.”

Like the 2005 South African Best Foreign Language nominee "Yesterday," the 2010 submission from South Africa, "Life, Above All" is the story of how AIDS impacts a mother and child. But while "Yesterday" focused on its titular mother, "Life, Above All" (which made it to the 2nd round of 9 films but did not score a nomination) centers on Chanda (the phenomenal Khomotso Manyaka), a 12 year-old girl who stands up to superstitious and uneducated prejudice of her village for not only her downtrodden mother Lilian (Lerato Mvelase), but her shunned and homeless best friend Esther (Keaobaka Makanyane, also amazing). The film was adapted from Allan Stratton's novel 'Chanda's Secrets' by Dennis Foon and he and director Oliver Schmitz ("Paris, je t'aime") made the wise choice to pare four years from their protagonist's age, a sixteen year old in a South African village being for all intents and purposes an adult. Schmitz has gotten amazing performances from his mostly inexperienced cast, right down to Mapaseka Mathebe, you plays Chanda's much younger half-sister Iris, an entitled little girl who believes her no-good drunken irresponsible father Jonah (Aubrey Poolo) gives her love and status. The film begins with Chanda going to arrange for the funeral service of her baby sister Sarah, but when she returns home, she finds that Jonah has stolen the money needed to bury his daughter. She finds him, drunk, with Dudu (Kgomotso Ditshweni) and wrestles the cash back. Chanda is a force to be reckoned with. When Chanda visits her mother's influential friend and landlord, Mrs. Tafa (Harriet Manamela, "Hotel Rwanda," "Yesterday"), to use her phone to notify relatives of the death, the woman pointedly tries to get Chanda to agree that Sarah died of influenza, just like her teenaged son died during a bank holdup. It is clear there is a coverup going on. Chanda doesn't say a word. When her mother's sister Aunt Lizbet (Tinah Mnumzana) arrives, she announces that she was 'the only one who could make it' and is only concerned with her own discomfort from the journey. All this ill will and secrecy eventually comes to light. It is shocking to think that still, on the continent which has suffered the most from AIDS, that there is still such little education about the disease, still such stigmas. But "Life, Above All" is first and foremost the tale of how one young girl stands up for love and decency against strong odds. There are two standout scenes between mother and daughter (the film should be a Mother's Day standard). In the first, Lilian brushes her daughter's hair and tells her about her father. In another, one which is nearly impossible to watch dry-eyed, Chanda finds her mother after more deception by friends and family. Manyaka is able to imbue Chanda with both goodness and spine, a good student who listens to her elders, but who becomes resolute when morals dictate. As Esther, orphaned by AIDS and left to fend for herself, Makanyane is so touching, yet without ever asking for sympathy, you'll want to take her home with you. Mvelase is affecting as Lilian, who has gotten a very raw deal from life while the only really experienced member of the cast, Manamela, is able to make Mrs. Tafa hatefully righteous, then turn it all around. The film has been nicely shot by Bernhard Jasper "Life, Above All" may not tread any new ground, but it is a very affecting film about women spanning generations in African culture. It's a small gem.

This is a taut family drama revolving around the women in small community where a death, and its cause, is of great concern to everyone. No one wants to mention the word “AIDS” but it is on the minds of all as neighbors are on the lookout for the those so diseased. Anyone even associated with an HIV victim is shunned by the rest. Young Chanda must run this gauntlet virtually alone. Her mother is sent away – though unsaid, to die from AIDS – and her best friend forever, poor street girl, Esther (Keaobaka Mayanyane), has turned to prostitution to survive and may also be a victim of the dreaded disease. Men are either alive, drunken louts, screwing with abandon and responsible for the ongoing AIDS epidemic in Africa, or the sainted dead, such as Lillian’s first husband and Chanda’s father. As such, women are the focus of “Life, Above All” making this a fine femme film set in a culture not familiar to American viewers. The youngsters playing Chanda and Esther are remarkable. The first timers give mature performances well beyond their years and make you believe, from the start, that they are Chanda and Ester. Director Oliver Schmitz deserves kudos for garnering such convincing performances from his young actors. The other significant women in the film, Lillian and nosey but sympathetic neighbor, Mrs. Tafa (Harriet Lenabe), also give outstanding and powerful performances. The way men are portrayed in the film, personified by Jonah (Aubrey Poolo), the father of Chanda’s younger siblings, is not pretty. Sex, drink and drugs are a man’s lot in this world and “responsibility” is just a word. This is most definitely a femme film but is also world class filmmaking.