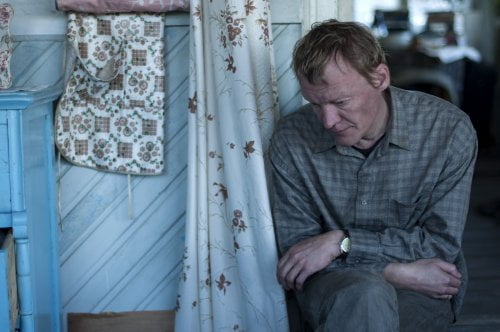 Kolya (Alexeï Serebriakov) is a mechanic whose business sits next to his bright and airy home on a hill overlooking a small fishing village in northern Russia on the Barents Sea. The town's mayor Vadim Shelevyat (Roman Madianov) has decided to appropriate his land and an indignant Kolya tries to fight back with legal assistance from his old army buddy Dmitri (Vladimir Vdovichenkov). Kolya's efforts will lead to tragedy as he is but one man taking on corruption that is a "Leviathan."

Cowriter (with "Elena's" Oleg Negin)/director Andrey Zvyagintsev's film is a political parable, using elements of the Book of Job in a modern telling of one man's fight against a corrupt system. While it is a universal tale, there is no mistaking its harsh criticism of Russian society, making its selection by that country for the foreign language Oscar quite remarkable (a severe backlash has begun now that the film has been nominated). It's an epic story, stunningly photographed by Mikhail Krichman ("The Return," "Silent Souls") in cool blues, Philip Glass's ("The Hours," "Elena") music swirling like a churning sea. The film begins with low level frustration as local cop Stepanych (Sergey Bachurskiy) comes looking for a carburetor for a truck Kolya's seen too many times before. His legal attempt at an appeal (his land has been valued at a fraction of its worth) is turned down and when Vadim shows up late, drunk (the film is awash in vodka) and aggressive, Kolya's attempt to file a complaint at the police station finds him jailed for his outbursts. Kolya's wife Lilya (Elena Liadova, "Elena") goes to a friend for help and sees for herself the type of depressing apartment they'd be forced to move to with the money Vadim's offered. Dmitri pays a visit to Vadim, a portrait of Putin prominent behind his desk, and makes some inroads, but surprises later by personally betraying his friend. Vadim's given new resolve by Orthodox priest Father Vasiliy (Vyacheslav Gonchar), who tells him he should use his power as power is given by God. A birthday picnic for Stepanych devolves into drunken target shooting (portraits of Russian leaders are supplied) while the bonds of friendship between Kolya and Lilya and Pacha (Aleksey Rozin) and Angela (Anna Ukolova) begin to be tested with sly comments on a suspected indiscretion. Zvyagintsev builds to a crescendo with the force of an ocean storm as Kolya's life is smashed against the rocks. Not only his home, but his wife, his son, Roma (Sergueï Pokhodaev), and his own freedom are taken away, aided and abetted by those he thought were on his side. The film reserves its final, biting irony for its last scene, which reveals the use of Kolya's land overlooking the skeleton of a beached whale. "Leviathan" is a great, literary work of existential despair, as magnificent as its titular creature. Grade: