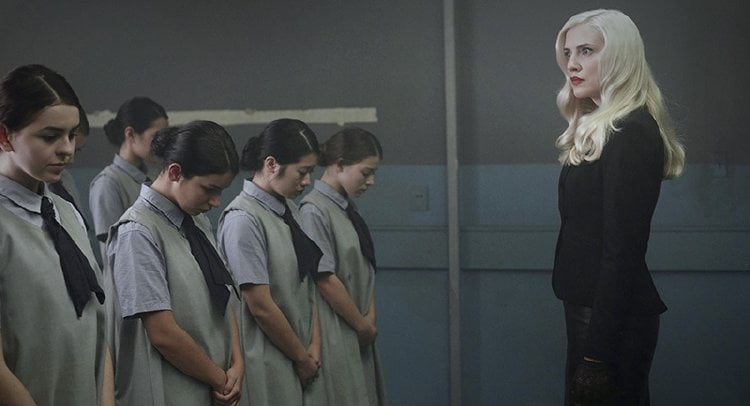 A group of uniformly attired young girls in a windowless institutional facility aspire to be ‘clean girls’ under the tutelage and strict rules of Miss Brixil (Sara Canning) as they ascend to the level where loving families will adopt the best of them. After witnessing the ejection of one of their own who missed the deadline for washing her face because she stopped to aid the poor-sighted Sophia (Celina Martin), Vivien (Katie Douglas) is alarmed to be reunited with the former friend she failed to help now that they have reached the ultimate “Level 16.”

This Canadian sci-fi horror hybrid from writer/director Danishka Esterhazy boasts plenty of style, a good cast and intriguing premise, a cousin of sorts to fellow Canadian Margaret Atwood’s ‘The Handmaid’s Tale’ with its group of tightly controlled women being groomed for some nefarious end. Unfortunately, the big reveal undermines Esterhazy’s carefully laid and creepy setup, a case of meticulous years long planning turning out to be utterly unnecessary to its end goal, if more dramatically interesting. Still, this one gets enough of a grip on you that you may not even notice the film’s iffy logic. We’re introduced to our protagonists at Level 10 (the levels correlate to age), a line of little girls in nighties waiting for their turn at a hallway sink. One steps up and faces a camera, rubs a cleaning powder on her face, rinses off and gets a green light. But the next is distracted when Sophia’s jar of cleanser rolls from her hands. Sophia, unable to see where it has gone, panics, and so she runs to help her. By the time she returns to the sink, the light is blinking red. She is ‘unclean.’ Two male guards troop down the hall and drag the terrified youngster away. Miss Brixil, who resembles Veronica Lake with her blonde waves and ruby red lips, drills groups of girls who chant the virtues of cleanliness - obedience, a sweet nature and other feminine subservient ‘ideals.’ When one looks up to address her, she’s sharply rebuked to keep her eyes down. But Miss Brixil has a treat for Vivien’s group - they are to be moved to Rose Hall at Level 16 and each is gifted with a new, white dress bearing a blue sash with their name embroidered upon it. We are shocked to realize none of them can read their names. Vivien is alarmed to see Sophia in Rose Hall, but Sophia persists in talking to her alone. She has a warning - stop taking the daily blue ‘vitamins.’ Vivien struggles with the idea, the self proclaimed group ‘leader’ a true rule follower, but what she witnesses the first night she’s covertly spit the pill out is chilling, an ‘unconscious’ visit along with (truly unconscious) Olivia (Josette Halpert) with potential new parents, Mr. and Mrs. Dennison (Canadian actress Sheila McCarthy). And there’s that guard, Alex (Vladimir Tsyglian), who’s been slipping into their room at night. Vivien’s almost comforted by her first visit with Dr. Miro (Peter Outerbridge), whose praise she cannot help but be gratified by. The kindly doctor informs her he’s the one who arranges for their ‘moving picture’ evenings, choosing films starring the favorite movie actresses they have all been named after. Vivien’s never heard of her namesake and is pleased when the next movie night features Leigh, but she learns to put more stock in her renewed, and quite frowned upon, friendship with Sophia. Sophia may get few chances to impart critical information, but her panic, based on six years of undrugged observation, is quite convincing. Katie Douglas grounds the film as the model student who bucks the system. Sara Canning adds the chills as this film’s glamorous take on Aunt Lydia and Esterhazy gives her complex notes to play once we learn of her complicity. Also strong is Outerbridge as the classic kindly doctor who turns out to be anything but. A lot of credit goes to production designer Diana Magnus (“Cube”) who’s created a convincingly terrifying world, all cast in blue and white, with meager means. Danishka Esterhazy’s film plays like “The Handmaid’s Tale” crossed with Lucile Hadzihalilovic’s “Innocence” and its male counterpart “Evolution,” yet her film stands on its own. Grade: