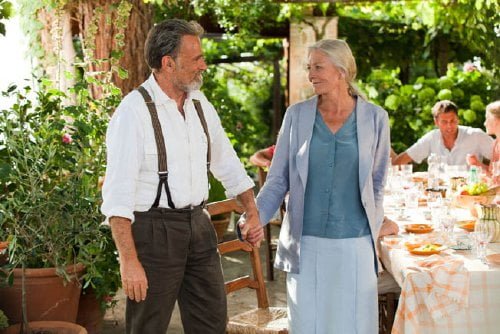 On a 'pre-honeymoon' vacation in Italy, aspiring journalist Sophie (Amanda Seyfried, HBO's "Big Love," "Chloe") sets in motion the reunion of lovers separated for fifty years when she discovers an unread missive in the wall in Verona where people write "Letters to Juliet."

Well, here's another romcom with one dimensional characters in the foreground triangle, but this one's raised up a notch by glorious Italian locations and the regal warmth of Vanessa Redgrave searching for a lost love in a subplot which mirrors the actress's own (Redgrave had a son with her "Camelot" costar Nero back in 1969, but married him years later, in 2006). Director Gary Winick ("Tadpole," "Bride Wars") keeps things moving along agreeably, but one wishes he had pushed his actors into more grey areas. From the get-go, it is clear that Sophie's fiance Victor (Gael García Bernal, "Y tu mamá también") is more obsessed with the opening of his New York restaurant than he is with her. No sooner have they checked into their Verona pensione, than he has her combing the countryside for suppliers of meats, cheeses and olive oils. She draws the line at a 120 km trip to view a special truffle and they decide to split their agendas. Sophie's sightseeing list includes Juliet's house and she is taken aback by the scores of women who leave letters on the wall. The New Yorker fact checker begins to write in her journal and when a woman comes and collects those letters in a basket, she follows her and discovers the 'secretaries of Juliet,' a group of women who respond in Juliet's stead. The next day, she accompanies Isabella (Luisa Ranieri) and her basket and dislodges a rock in the wall that has been hiding a letter written back in 1957. Juliet asks if she may respond to this one. Less than one week later, the letter writer's grandson, Charlie (Christopher Egan, "Eragon," TV's "Kings"), arrives to tell her off. And therein lies the film's biggest problem - its male costars and the direction thereof. Victor's most oft-quoted line is 'I feel so bad, but...' He can be summed up with one word - selfish. Then along comes Charlie, all boorish and antagonistic right out of the gate. Egan, at least, gets an arc, but we're never given a satisfactory explanation for his initial behavior. Seyfried, who has now had the honor of having her hair combed on screen by both Meryl Streep and Vanessa Redgrave, at least has romanticism and likability on her side as Sophie, but Sophie's introduction is one of an indulgent doormat. Even Franco Nero, as the long lost Lorenzo, fails to strike a real chord. Redgrave, though, is lovely, as Claire, the woman whose wrong decision at the age of fifteen gave her a dutiful rather than romantic life. The deep affection Redgrave exhibits as Claire towards the two youngsters she tries to nudge together feels unearned somehow, but she carries herself with such grace that to be in her sphere is to be uplifted by it. The screenplay, by Jose Rivera ("The Motorcycle Diaries") and Tim Sullivan ("Jack & Sarah"), bases its road trip on the amusing idea that there are 74 men with the name Claire is looking for, so while Victor ditches Sophie for a wine auction, she takes off with Claire and Charlie on a quest which she thinks may be the basis of a great story. The mistaken identifies along the way are by turns humorous (an aging lothario in a Speedo, a man whose wife begs them to take him) and sad (a man suffering from senility in a home, a gravesite). And, of course, the writers make hay with the Juliet scenario, but at least have the good graces to address that head on. (If only the overt product placement for Caparzo wines had been handled as well, let alone an embarrassing flirtation via ice cream food fight.) Except for its Manhattan bookending scenes (an uncredited Oliver Platt plays Sophie's New Yorker boss), "Letters to Juliet" provides a nice travelogue of Tuscany, using the cities of Verona and Siena for a fresh cinematic perspective. It's no "Under the Tuscan Sun," but it's a far better sit than "When in Rome."