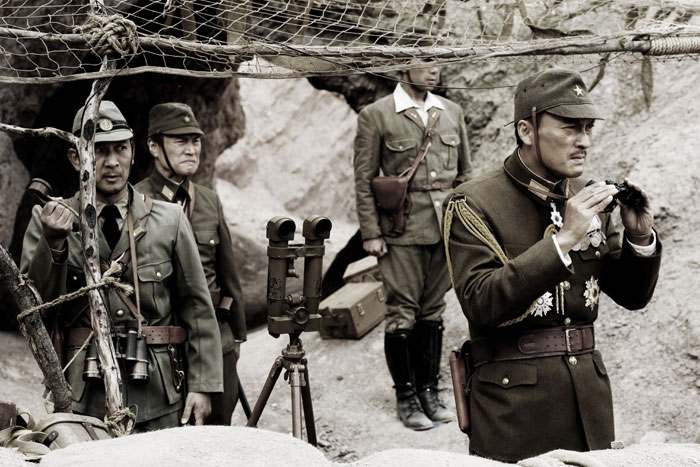 In 1945, the Pacific war against Japan was nearing its end when the United States made plans to launch its next attack on the first of the Japanese home islands. Director Clint Eastwood, working with a script by Iris Yamashita, tells of this famous battle through the eyes of the island’s defenders in “Letters from Iwo Jima.”

Lonely Owen (Kodi Smit-McPhee, "The Road") finds his new neighbor Abby (Chloë Grace Moretz, "Kick-Ass") sitting barefoot in the snow in their apartment complex courtyard one evening and she tells him she cannot be his friend. But Abby is intrigued by Owen and one night he finds her tapping at his window asking for him to "Let Me In." American remakes of well regarded foreign films are almost always poor imitations, but director Matt Reeves ("Cloverfield"), adapting the John Ajvide Lindqvist novel and screenplay, has made a film that plays better than the original - for its first half. Moving the setting from Sweden to Los Alamos, New Mexico, a town whose very name evokes images of death (nuclear testing), was inspired (the film's opening shot of emergency vehicles snaking through the snowy hills is breathtaking) and Reeves's stars Smit-McPhee and Moretz both give more compelling performances. The score (Michael Giacchino, "Up"), too, adds to the overall effect with its droning horns and kettle drums. It's a creepier film altogether until it loses its pacing in the second half, closing with a penultimate and final scene which suffer in comparison to "Let the Right One In." Reeve's adaptation dispenses with the lives of its protagonists' adult neighbors and its a good move. When we meet Owen, the pale and bony boy with the abnormally large eyes and forehead is wearing a very creepy mask, spying on them with a telescope. Every one he targets will meet a bad fate. His mother (Cara Buono, "Mad Men's" Faye Miller) is a religious woman who only drinks wine while Owen eats and fights on the phone with the father she's divorcing. At school, Owen is bullied by a trio led by Mark (Jimmy 'Jax' Pinchak, "Hostage"), but he suffers in silence, explaining away his injuries as clumsiness. Abby knows otherwise, though, and tells him he must fight back. While Owen takes a while to discover why Abby doesn't appear to feel the cold or appear during the day, we know right away what she is. Abby's father (Richard Jenkins, "The Visitor") hides in the back seat of unsuspecting victims, wearing the film's other creepy mask of a garbage bag with eye holes, then slays them and drains their blood. But he's getting sloppy and tired and Abby begins to have to take it upon herself to feed (the scrambling stop motion effect used for her attacks is eerie). With Abby's support, Owen does indeed begin to stand up to his tormentors, rather viciously, in fact, and when he comes to know what she is he accepts it and defends her, even after spying an old sepia-toned photograph that reveals that her father is not her father but someone who was once like Owen. His first major test comes when the policeman (Elias Koteas, "Shutter Island") who's been investigating the mysterious crimes and the identity of a badly burned suicide (Jenkins) locates Abby's sleeping nest. Technically, the film is stunning. Greig Fraser's ("Bright Star") cinematography is not only stunning but cunning - a horrific car accident filmed from within as the car rolls over is a jaw dropper and the film is seamlessly edited by Stan Salfas. Moretz has supplanted Abigail Breslin as the it girl of a certain edge and she's showing more and more range indicating a strong potential to act into adulthood and Smit-McPhee is otherworldly. Jenkins exudes the weariness of having to murder for a loved one for decades. "Let Me In" is far from an unnecessary remake. It will bring an unusual story to those who won't abide subtitles and should even please fans of the Swedish original. Reeves, too, should find his stock ascend as "Let Me In" exhibits true filmmaking artistry.