Let the Right One in (Låt den rätte komma in) 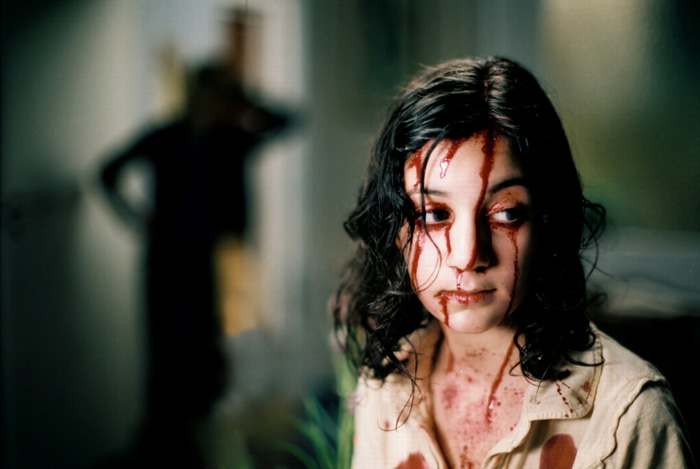 Oskar (Kåre Hedebrant) is a twelve year old with a problem - he's being bullied by Conny (Patrik Rydmark) and his mates and cannot talk to his single mom about the problem. One night, he meets Eli (Lina Leandersson), a young girl who has moved into the apartment next store. She quickly senses and advises him and Oskar comes to learn he's "Let the Right One In."

This Swedish gem explores the classic vampire story from many different angles, and yet, considering its locale in a small Swedish town, doesn't use the 'land of the midnight sun' perspective of last year's Alaskan set "30 Days of Night." That's because in addition to being a moody and occasionally quite gory horror tale, "Let the Right One In" is primarily a twist on the coming of age genre. John Ajvide Lindqvist adapts his own novel and director Tomas Alfredson establishes a tone of gentle quiet white disturbed by flashes of blood red violence. Cinematographer Hoyte Van Hoytema helps establish the mood with the film's opening shot - snow falling against a night sky in a hushed landscape. We're introduced to Oskar as he stands in his window, pale and naked from the waist up, threatening an unseen opponent with a knife. 'Squeal, squeal like a pig!' he demands, imitating the taunts of his oppressors. Next door, Erik (Henrik Dahl) arranges some tools and a large container, then sets off into the snow. He asks a passing stranger the time, the slits his throat and strings him upside down, but as he attempts to gather the man's blood, a white poodle interrupts and Erik flees as the dog draws its owners. The murder sets the Swedish town on edge and neighbors Gösta (Karl Robert Lindgren), Lacke (Peter Carlberg), Gina (Ika Nord) and Jocke (Mikael Rahm) gather at the local cafe to discuss the merits of the death sentence. When Erik, sitting apart, is invited to join them, he makes excuses and leaves. Arriving home empty-handed, Eli asks if she must fend for herself and likable Jocke (Mikael Rahm) becomes her target, lured beneath a bridge to be fed upon. Erik disposes of the body in a nearby lake. With the relationship of vampire and older blood gatherer established, we begin to get a sense of Oskar's daily grind. He's called 'piggy,' punched, finds his pants in the urinal after gym class (one wonders how rife this problem is in Sweden, given the similar subject matter of 2004 Foreign Language nominee "Evil"). Although Eli tells Oskar at their first meeting that they cannot be friends, he finds the Rubik's cube he's given her perfectly completed and she, always underdressed for the cold and snow, joins him and seems to intuit his troubles. 'Hit back hard,' she tells him and, during a school outing on the frozen lake, Oskar draws blood of his own, adult supervisors distracted by the find of Jocke's body. The signs begin to add up, though, and Oskar must finally ask Eli a fateful question - 'Are you a vampire?' "Let the Right One In" seeps beneath the skin, its slow, quiet pace lulling the audience like a vampire's gaze. We rarely see child vampires, and arresting Eli's development at twelve makes all the bloodletting symbolic of puberty. With Erik's ability to provide for Eli failing (there are faint echoes of "The Hunger" in Erik's tale), the young man steps in to replace the father figure who has 'given away' the bride by destroying himself while protecting her. Eli's influence makes a man out of Oskar, although she must revenge him one last time before he gives himself totally. The young actors deliver some powerful emotional scenes under Alfredson's direction. Hedebrant, of the translucent skin and white blonde hair, opens up slowly to the almost feral Leandersson. The film's most powerful sequence shows Eli's willingness to sacrifice herself for Oskar, entering his home on a dare without an invite. When he frantically backs down she invites him to 'be me for a little while,' an eerie mind meld with a brief glimpse of her true age. While the vampire rules are followed, Eli answers questions in surprising ways - her age? 'Twelve, but I've been twelve for a long time.' The film continues to surprise throughout. Cat lovers will be on tenterhooks in one scene, only to have it take a radical turn. Oskar's salvation by Eli is a gory delight, the evidence of her work artfully presented in real time without witness to its execution. "Let the Right One In" leaves us with yet another twist on a tradition, hopeful on the outside, horrific in its subtext. The film plays like a lullaby by the Brothers Grimm.

I remember, as if it only just happened, the siege of the Move compound and the subsequent bombing that destroyed by fire three city blocks. The fact that there were children in the compound did not faze the police or the city’s mayor as we watched the fires burn on TV news. Documentary filmmaker Jason Osder, in his debut feature, delves back into the 17 year history of John Africa and his Move group prior to the 1985 showdown. John Africa (born Vincent Leaphart) founded Move in the early 70s. His movement espoused getting back to nature, eating vegan and standing up for animal rights. This radical group soon came under the eye of the Philadelphia police who harassed the compound inhabitants until, in 1978, the authorities ordered a raid which ended in nine Move members arrested for illegal firearms possession. Those arrested were later released when the weapons the police seized proved to be disabled. The tension only got worse after the raid and culminated in the titular incident. Osder uses archival footage of the bombing and the deadly conflagration that it spawned, footage from the hearing about the bombing, news station interviews and reports on John Africa and Move in the decade before the bombing. Missing, though, are modern-day talking head interviews with analysts or those who were there in 1985. This does not help those unfamiliar with the deadly event to get the historical perspective of time.