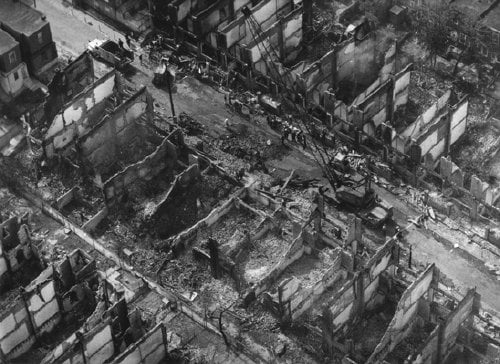 On 13 May 1985 a standoff between the members of Move, a radical movement founded by John Africa in Philadelphia, and the police reached fever pitch. The highest ranking officials in the city order the bombing of the Move compound. The conflagration that ensues goes unchecked, destroying 61 homes and killing 11, including five children, when the decision was made to “Let the Fire Burn.”

I remember, as if it only just happened, the siege of the Move compound and the subsequent bombing that destroyed by fire three city blocks. The fact that there were children in the compound did not faze the police or the city’s mayor as we watched the fires burn on TV news. Documentary filmmaker Jason Osder, in his debut feature, delves back into the 17 year history of John Africa and his Move group prior to the 1985 showdown. John Africa (born Vincent Leaphart) founded Move in the early 70s. His movement espoused getting back to nature, eating vegan and standing up for animal rights. This radical group soon came under the eye of the Philadelphia police who harassed the compound inhabitants until, in 1978, the authorities ordered a raid which ended in nine Move members arrested for illegal firearms possession. Those arrested were later released when the weapons the police seized proved to be disabled. The tension only got worse after the raid and culminated in the titular incident. Osder uses archival footage of the bombing and the deadly conflagration that it spawned, footage from the hearing about the bombing, news station interviews and reports on John Africa and Move in the decade before the bombing. Missing, though, are modern-day talking head interviews with analysts or those who were there in 1985. This does not help those unfamiliar with the deadly event to get the historical perspective of time.