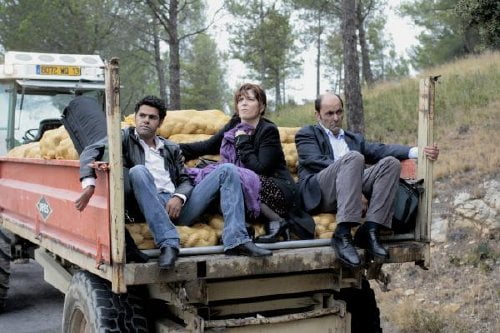 Karim (Jamel Debbouze, "Amélie," "Days of Glory") is bored with his job at a hotel reception desk so is thrilled that his mentor, journalist/documentarian Michel Ronsard (Jean-Pierre Bacri, "Look at Me"), wishes to work with him. The subject? Agathe Villanova (Agnès Jaoui, "Look at Me"), an author and feminist who will be coming from Paris to her hometown to run for office against a 25 year incumbent due to France's gender parity election laws. Meanwhile, Florence (Pascale Arbillot) who lives in the family manse inherited from their parents and still maintained by Karim's mother Mimouna (Mimouna Hadji) wonders why her famous sister isn't staying with them in "Let It Rain."

Cowriter (with husband/star Jean-Pierre Bacri)/director Agnès Jaoui ("The Taste of Others," "Look at Me") makes films that explore the human condition, particularly how perception alters relationships, with large ensemble casts whose members criss cross among societal groups. "Let It Rain" (whose title more literally translates to "Talk to Me of Rain"), is no different except it is funnier than her earlier films and specializes in commenting on how a character's strength or fragility affects their relationships. Things start out well enough for Karim and Michel, but it is immediately apparent that Karim may be the better filmmaker as he points out the effect a fan palm is having on their framing of Agathe. In a beautiful metaphor for their relationship, Agathe's boyfriend Antoine (Frédéric Pierrot, "I've Loved You So Long") holds the offending branch out of sight. Then Jaoui begins to startle us with revelations about the layers of interconnectedness among her little groups. Florence, depressed because of the weather, is acting out with husband Stéphane (Guillaume de Tonquedec), whom she considers childlike, especially compared to her lover, which is funny because he is the most inept at life. She is also disgruntled at being kept in her sister's shadow ever since they were young girls. Karim, married to the little seen Séverine (Anne Werner) (whom Michel significantly always calls by the wrong name), is made aware that his cute coworker Aurélie (Florence Loiret-Caille, "The Time of the Wolf," "The Intruder") is attracted to him and is unsure how to handle the feelings he finds he has. Agathe learns that she is considered bossy, most cruelly by a private cut of the documentary made by Karim that she was not supposed to see, and finds her strength of character isolates her from those she loves. Throughout the film, Jaoui uses the documentary shoot for most of her overt comedy, but it also shows the turnaround in the relationship between Karim and Michel. When Karim turns out to be a highly intelligent interviewer who draws out terrific content, Michel has neglected to film. When Michel interviews, he rambles on about himself. When they drive out to a panoramic location, sheep interrupt the sound. Worse, they end up stranded at a country farmhouse and Agathe misses the rally which was the point of her entire trip. Later, a chance meeting opens Karim's eyes to Michel's reality and the filmmakers make the scene both laugh out loud funny and poignantly humiliating. Jaoui and Bacri have a real talent for making strong points with subtle gestures. As Florence storms out to rescue her stranded sister, she makes it clear that she's annoyed Stéphane thinks she might want company. Several scenes later, we see them driving back, very late, Stéphane at the wheel. They use the little absurdities of real life, like misplacing one's reading glasses or those reading lights people use in bed so as not to disturb their partners, to illuminate their characters. The film has a bizarrely original soundtrack of old French standards and instrumentals complete with tubas which are delightfully right. Like Jaoui and Bacri's earlier films, "Let It Rain" is very French, very conversation heavy, yet Jaoui wraps with a dialogue-free montage, in the rain of course, which shows a hopeful future for each of her characters. They may all have their foibles, but it is a sheer pleasure spending time in their company.