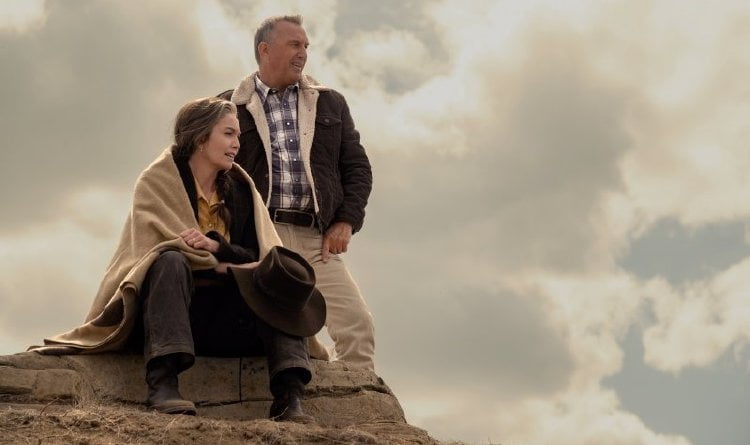 Three years after their son died being thrown from his horse on their Montana farm, George (Kevin Costner) and Margaret Blackledge’s (Diane Lane) widowed daughter-in-law Lorna (Kayli Carter, "Charlie Says") marries Donnie Weboy (Will Brittain, "Blow the Man Down").  George reassures Margaret that their grandson Jimmy will just be a drive into town, but when Donnie moves them back to North Dakota after Margaret’s witnessed him slapping both Lorna and her grandson, she’s determined to demand the Weboy clan “Let Him Go.”

Writer/director Thomas Bezucha ("The Family Stone," Monte Carlo") has adapted Larry Watson's novel into one strange genre hybrid.  Taking place in 1963, the film is part old-fashioned Western, and, at its best, a slow burn senior relationship movie before it goes all “Devil’s Rejects” in a Dakota motel room at the beginning of its third act, its new fangled violent extremes at odds with its classicism.  The film’s very well made and every moment spent with Costner and Lane is a treat, but the evil they come up against is so sociopathically extreme it drags the film down in its final act.

The film’s very opening scene depicts two generations happily converging in a cramped kitchen, yet there is a subtle tension between the two women over the raising of the baby, something which will become more significant three years later.  But if Margaret isn’t as supportive of Lorna’s maternity as she should be, she is clearly horrified at the treatment she sees inflicted on the young woman at the hands of her new husband.  It is Jimmy, though, who is her primary concern, her last link to her only child.  When George arrives home to find half his house packed up, his wife all gung ho to drive to North Dakota and convince Lorna that Jimmy would be better off with them, and his quiet appeals to common sense get no traction, he agrees to the trip and we know he believes he will merely be giving his wife a chance to say goodbye.  What they end up facing is something altogether different.

Their trip is leisurely, cinematographer Guy Godfree ("Maudie") emphasizing the wide open spaces that their gold Cadillac station wagon cuts through, Margaret offering homemade treats as George drives.  After enjoying the outdoors at a stop, the couple returns to find a young man on a horse snooping about their car.  We immediately suspect the Weboys, but Peter Dragswolf (Booboo Stewart, "X-Men: Days of Future Past") is a young Native American living on his own for reasons we can only suspect and a friendship is struck that we just know will come into play later in the story.

George’s past as a lawman puts him in good stead with Sheriff Nevelson (Bradley Stryker), who offers his empty jail cells as an odd B&B and help tracing Weboys.  The first that they meet is a cousin to the clan who points them to neighboring Gladstone, but not before we notice the long, jagged scar running down the side of his neck.  There they find Bill Weboy (Jeffrey Donovan, "Lucy in the Sky"), a man with a smile like a shark, who offers to escort them to the difficult-to-find remote home base of the family matriarch, where they are assured they can see their grandson.  He insists one travel with him, his intentions toward Margaret clearly not honorable.

While it is fun watching Lesley Manville ("The Phantom Thread") go all “Animal Kingdom” Jacki Weaver with a silver bouffant and cherry red talons (‘Do you like pork chops?’), she and her Weboys emerge straight out of a horror movie, abetted by a Sherriff (Greg Lawson) used to doing their bidding.  All the lovely character building of a decades long marriage takes a back seat to fast-paced violence which, in the film’s final scene, enters campy B movie territory.  (Compare this to, say, the evil faced in the expertly staged showdown of Costner’s own “Open Range” – can’t hold a candle to it.)

Watch “Let Him Go” for the lovely interactions between Costner and Lane portraying the type of marriage where communication is accomplished with a glance and mood determined by the tension in a partner’s shoulders.  The film’s period production and Western locales prove the perfect backdrop to the horse-breaking couple overcoming unimaginable loss.  Just prepare yourself for a third act which will throw you like a mechanical bull.