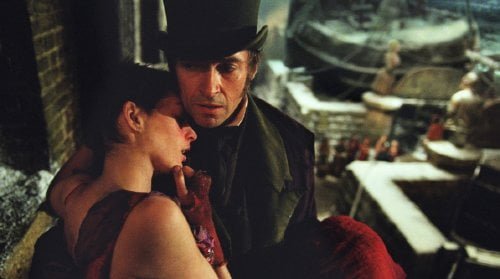 Thief Jean Valjean (Hugh Jackman) exhibits incredible strength and fortitude to his jailor Javert (Russell Crowe), something the Colonel recognizes years later when Valjean has remade himself as a well-to-do factory owner and mayor of Montreuil. But Javert convinces himself otherwise until years later when they meet on opposite sides of the 1832 peoples' June Rebellion in "Les Misérables."

It took over twenty-five years to turn the smash hit Broadway musical into a film but while Anne Hathaway is transcendent performing its most famous song, 'I Dreamed a Dream,' director Tom Hooper ("The King's Speech") seems determined to cut the rest of this epic off at the knees. "Les Misérables" is one of the ugliest big budget awards season movies to date with framing that cuts off the top of young Cosette's head, close ups so insistent the focus puller must have ulcers and a camera that moves in to the underside of Hathaway's chin while Fantine lies dying. Yes, some amount of reveling in dirt and squalor is commendable given the subject matter, but when a closeup of the adult Cosette (Amanda Seyfried, "Red Riding Hood") just accentuates facial blotching and peach fuzz things have gone too far. Above all, there is no dramatic tension between Jackman's Valjean and Crowe's Javert. The film begins with an almost unrecognizable Jackman as Valjean, shackled, one of many pulling a ship into its cradle under the steely eyed gaze of Javert (just about Crowe's only expression throughout). Released, Valjean finds the world is not much better, especially having been being classified as 'dangerous.' But the Bishop of Digne (Colm Wilkinson, "Les Misérables in Concert: The 25th Anniversary") shows compassion, giving him food, shelter, advice and silver candlesticks (I must presume the musical, which I have not seen, breaks from the classic story where the silver is stolen). Valjean pledges to change his life and he does, dramatically, but his misery slot is taken by one of his workers, Fantine. Her fall into a life of disrepute and agony for the sake of her child is the film's best sequence, but hunker down for another two hours. We meet the young Cosette and Isabelle Allen is a casting marvel - not only does she look like the musical's famous logo, but the child has a clear, sweet voice and proffers more depth of character than her elder counterpart ever musters. Cosette's Cinderella lives in the whirl of comedy that is her conniving guardians' inn. Thénardier (Sacha Baron Cohen) is a drunkard, his wife (Helena Bonham Carter, recycling Mrs. Lovett) a greedy slattern, both so outsized they're like tears in "Les Miz's" tapestry. The film's bid for an Original Song Oscar nomination, "Suddenly," is supposed to connect Valjean, who's come to save Cosette, with his young charge, but once again Hooper insists on nonsensical closeup of only the singer rather than framing the song. Their escape from Javert through narrow, walled pathways that follows is one of the few interesting visuals in the film, however. Everything leads up to the introduction of Marius (Eddie Redmayne, "My Week with Marilyn"), the have fighting with the have-nots who is oblivious to the adoration of Éponine Thénardier (a terrific Samantha Barks, "Les Misérables in Concert: The 25th Anniversary," whose solo "On My Own" is the film's other great musical number) especially once he lays eyes on Cosette (now played by the bland Seyfried). In Paris, the big production suffers from visible matte work and Hooper ramps up his predilection for using a wide angle lens, a distracting quirk not unlike Spike Lee's double dolly shots. There's a young mascot, Gavroche (Daniel Huttlestone), who speaks with a Cockney accent, as if he wandered out of "Oliver Twist's" London into Paris. The emotional pitch here, though, so contemporary with today's Occupy Movement, is hard to deny when the film focuses on the rebels. Aaron Tveit of TV's 'Gossip Girl' is notable supporting Redmayne as Enjolras. Hooper also finds a good ending, bringing Fantine back to enshrine the now elderly Valjean as a good man. Hooper occasionally attempts to connect his characters through visual cues (watch for the reappearance of those candlesticks and that ship's cradle), but subtlety isn't his strong suit. He made the much noted decision to record his actors' singing live on set and the sound editing is very well done, creating harmony among players crosscut among different locations. Basically, there's a nice bit here, a performance there, but overall "Les Misérables" is a trial.