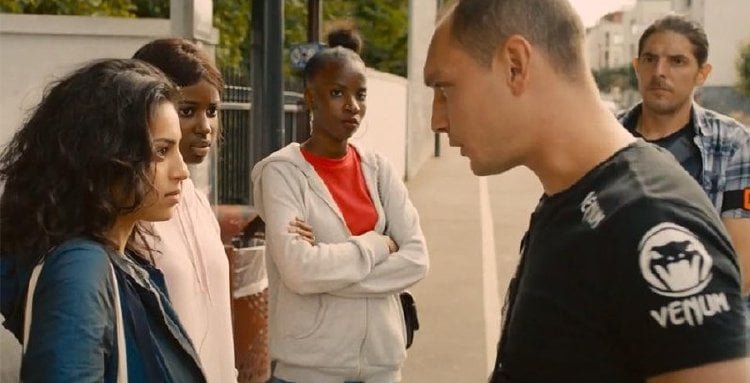 Everyone is French when the country’s team wins the World Soccer Cup, diverse crowds uniting in happiness, French flags flying as everyone sings ‘La Marseillaise.’ But when Stéphane (Damien Bonnard, “Dunkirk,” “The Trouble with You”) joins the local crime unit that patrols Montfermeil, an African Muslim Parisian ghetto that Victor Hugo’s Gavroche called home, he is unsettled by unit sergeant Chris’ (Alexis Manenti) racist and misogynistic behavior toward “Les Misérables.”

After riots erupted in his home of Montfermeil, writer/director Ladj Ly began filming, making several short documentaries that not only showed the ongoing riots from the rioters’ point of view and the media’s interpretation of them, but the vitality and hope that still existed in these neighborhoods. Ly had been filming on his own streets since the age of fifteen, supported by the Kourtrajmé collective, so it is notable that while his feature film debut echoes Hugo’s classic for modern times, it is also a fine example of the French policier procedural.

Stéphane’s introduction to his three man team includes sexist comments from their female police chief (Jeanne Balibar, “Cold War”) as she jokes around with Chris and venting that now that the Muslim Brotherhood helped clean up the drug scene, the Nigerians are trashing the neighborhood with cheap prostitution. A young boy in the station, Issa (Issa Perica), is berated for stealing chickens.

Patrolling the streets with Chris and driver Gwada (Djebril Zonga), a local of the neighborhood, our surrogate Stéphane witnesses Chris sexually humiliate and intimidate teenaged girls for nothing other than standing at a bus stop and learns that those wearing orange vests work for
The Mayor (Steve Tientcheu), an unofficial neighborhood political force. The three are stopped by an enraged gypsy, Zorro (Raymond Lopez), demanding that they find the kid who stole his lion cub from Cirque Zeferelli. The innocent Stéphane is sent to get information from Salah (Almamy Kanoute), a Muslim café owner, where he instead receives a lecture about caging God’s creatures.

Overhead flies a drone operated by Buzz (Al-Hassan Ly) choosing various situations to hone in on. After getting in trouble with three local girls, he happens to catch Gwada’s accidental firing of a flashbang into suspected lion cub abductor Issa’s face as a mob of kids try to protect one of their own. While the unit has a crime to solve to keep neighborhood peace, Chris is only concerned with retrieving the damning footage spirited away by Buzz’s drone.

Ly depicts his home as a roiling cauldron of traditions and tensions, clashing cultures and culinary outreach where poverty ensures criminal behavior just as it encourages neighborhood watches. There is no black and white in Montfermeil, just many shades of gray painted by an exemplary ensemble, its most outlying tones articulated by Bonnard and Manenti. Ly brings his dense screenplay (written with Giordano Gederlini and Manenti) to vivid life, cinematographer Julien Poupard alternating the immediacy of neighborhood pocket on-the-street confrontations with bigger picture geographical crowd scenes, all linked with Buzz’s drone shots. An ambush is so well choreographed, it recalls “The Raid.”
After just about reassuring us with an uneasy détente, Ly caps his film with a truly breathtaking final shot. He ends with a Victor Hugo quote - ‘There are no such things as bad plants or bad men. There are only bad cultivators.’