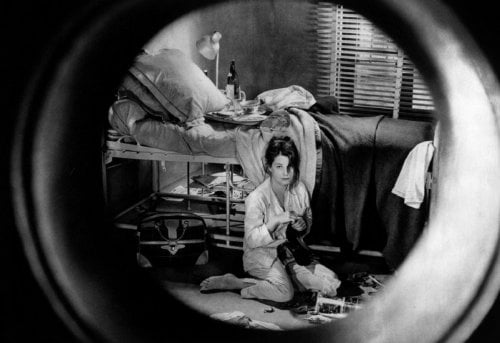 Dr. Malik (Gerard Sety) manages a run down sanatorium that is on the brink of collapse. That is, until he is offered 5 million francs to take in a patient but not to examine him. The money is too tempting and, soon, his clinic is overrun and taken control by “Les Espions.”

Henri-George Clouzot was known as the French Alfred Hitchcock and his films were always steeped with his Gallic personality. In “The Spies” he turns to an international all-star cast for a whimsical whodunit that is satirically funny. Ostensibly, the film centers on Dr. Malik and his woeful struggle to keep his sanatorium open. This focus changes, though, when the mysterious Col. Howard (Paul Carpenter) makes the doctor an offer he cannot refuse and the new patient, Alex (Curt Jurgens), sets up house in the clinic. Alex may be a genius who has discovered how to make a miniature nuclear bomb and this possible discovery gets the attention of both the Soviets and Americans. For the Sovs, gregarious spy Michel Kaminsky (Peter Ustinov) arrives on the scene to kidnap the scientist while the Americans send their stern chief intelligence officer, Sam Cooper (Sam Jaffe) to take control of the situation. There are many other suspicious characters, including mute clinic inmate, Lucie (Vera Clouzot), who is not what she seems. “Les Espions” is a piece of espionage frivolity for Clouzot that does not take itself seriously. The characters are drawn two-dimensionally, allowing the actors to put their own spin to their on-screen personae. This is an international spy versus spy thriller that keeps you trying to figure out who are the good guys and who are the bad guys, and have fun, too.