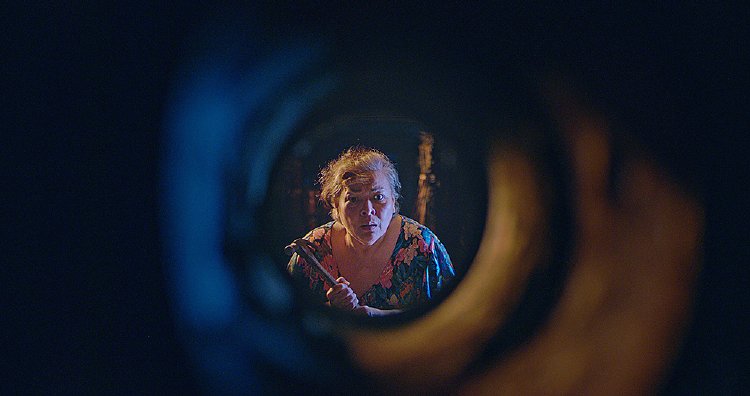 Rudie (Bong Cabrera) wants to strike out on his own, but he worries about leaving his mom to live on her own.  Leonor Reyes (Sheila Francisco) was once a renowned screenwriter of Filipino action films, but now old age has set in and her power is off because she keeps forgetting to pay the electric bill.  Rudie’s concern escalates when his mom is bonked on the head by a falling television and falls into a coma, but unbeknownst to him, she is living in ‘The Return of the Kwago,’ her unfinished action script where “Leonor Will Never Die.”

Movies where a writer enters their own story are nothing new, but writer/director Martika Ramirez Escobar ups the ante by making Leonor’s story a tribute to her deceased son Ronwaldo (Anthony Falcon), a ghost who every member of the family still chats with and who has an alter ego in action star Rocky Salumbides.  But that doesn’t mean Leonor’s script is very good and despite Francisco’s charm, the film is an exercise in tedium which devolves into a meaningless meta musical number as it completely runs out of gas.

Former Philippine president Rodrigo Duterte’s war on drugs infamously turned into a human rights crisis, police killing over 12,000 in the streets, so when we first see the ghost of Ronwaldo outside of his mother’s home, his white tee stained with blood, we assume he’s a victim of the drug trade.   The real reason behind his death might make sense to the filmmaker, but it makes little sense to an audience who might conclude he died as a child.  But drugs are indeed the driving factor behind Leonor’s screenplay which begins with her fictional Ronwaldo (Salumbides) finding his brother Conrado (Raion Sandoval) dying in the street, the murder weapon and a packet of powder planted on his person.  ‘Take care of our mother’ are his dying words.

As Rudie consults with his mother’s doctor, who advises talking to her to engage her imagination, Leonor simply ties a scarf around her wound and wanders into the strip club where Ronwaldo is about to save exotic dancer Isabella (Rea Molina) from her abusive ex.  And while Leonor may never die, too many who cross her path, including that mom Ronwaldo was tasked with protecting, do.

This is the type of film which may not travel well, Escobar at her most successful replicating Leonor’s cheesy Filipino action movie, where movie punches that don’t fully land compete with grisly death scenes (one bad guy is dispatched with a nail hammered through his eye).  Salumbides acquits himself well as the beefcake hero while Francisco endears waddling through the chaos in her housecoat.  The film’s high point may be the moment when Rudie spies his mom armed with a hammer on the television in the hospital’s waiting room, its occupants and staff gathering around to cheer her on.

But “Leonor May Never Die” has already worn out its welcome by this point, Reyes family dynamics (Leonor’s ex Valentin is also on board) a mere distraction from her simplistic action plot.  The whole thing stops in its tracks as Escobar invites us to view her editing choices and consider how to wrap things up and the full cast song and dance number chosen simply doesn’t cut it.