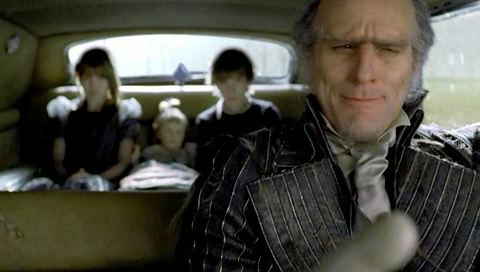 The three Baudelaire children's loss of their parents and home in a horrific fire and their subsequent guardianship by cousin Count Olaf (Jim Carrey) provides copious material for writer "Lemony Snicket's A Series of Unfortunate Events."

Director Brad Silberling ("Moonlight Mile") takes on the challenge of translating perhaps the second most popular series of current children's books for the screen and succeeds most of the time. The world created by production designer Rick Heinrichs ("Hulk") is gloriously right and the casting of the children and their arch-nemesis is perfection, but some supporting players don't really fit the bill. Robert Gordon's ("Men in Black II") adaptation of Daniel Handler's (aka Lemony Snicket) first three books is admirable in its structure, but loses a lot of Handler's witty vocabulary lessons and adds an unnecessary conspiracy plot. So many franchises have begun with less promise, though, so Silberling has set expectations high for the future of this series. Just as the books warn not to come looking within their pages for happy stories, the film begins with a faux retro stop-motion short titled "The Littlest Elf," before our narrator, Lemony Snicket (Jude Law, "Closer," voicing over a typewriting silhouette), warns us to 'step out of the theater, living room or airplane' if we wish to see a happy film. Violet (Emily Browning, "Darkness Falls"), Klaus (Liam Aiken, "Road to Perdition") and Sunny (two year old twins Kara and Shelby Hoffman) Baudelaire are introduced with their respective talents for invention, research and biting through things, then placed on an eerily dreamlike beach where their parents' banker, Mr. Poe, (Timothy Spall, "Harry Potter and the Prisoner of Azkaban") will find them to deliver very bad news indeed. The shell shocked children are delivered to a relative they've never heard of, Count Olaf, an actor who lives in a gloomy, run-down townhouse and keeps letting the word 'fortune' slip when he means to say 'children.' Once Olaf is uncovered as bad news (although not the complete blackguard he really is - adults never believe children in Lemony Snicket's world), the Baudelaires go on to new homes with Uncle Monty (Billy Connolly, "The Last Samurai"), a kindly reptile expert, and Aunt Josephine (Meryl Streep), a competent grammarian but ineffective guardian, but Olaf uses his actor's trade to disguise himself and weasel into the children's midst wherever they go. Screenwriter Gordon has smartly created a new climax for the first Snicket episode and transferred the book's ending to the film's finale, but the epilogue, in which Snicket's lessons of sibling reliance, love and home are collected, goes on so long as to blunt the film's climax. Olaf's troupe, each of whom plays a major supporting role in his deceits, aren't given enough definition in this first outing. Snicket's illustrative wordplay, which make the books witty and educational, is pared back to a minimum. Sunny's 'monkey talk,' theoretically translated on the page, is accompanied by amusing subtitles on the screen. Brett Helquist's cunning illustrations for the Lemony Snicket books are almost as important as the words within, but they implant a definite look for the characters and environs in the reader's mind. Heinrichs and his art directors have clearly taken them to heart to give the film a fantastical gothic look, much like something one would expect from a Tim Burton film. Costume design by Colleen Atwood and Donna O'Neal ("Big Fish") embellishes upon the pencil drawings to good effect, particularly in the fishnet sleeves of Violet's dress which create a waifish vulnerability. Jim Carrey brilliantly immerses himself into Helquist's Olaf - he's all odd angles, physically exaggerated. The character may as well have been written for him. Browning and Aiken have been beautifully cast as siblings and both are extremely photogenic, even with the grave expressions the Baudelaires usually carry. Director Silberling coaxes an actual performance from the twins, too, who often provide the film's punch lines (albeit aided with sound effects). However Catherine O'Hara ("Surviving Christmas") is all wrong for the grandmotherly Judge Strauss, just as Meryl Streep seems wasted as Aunt Josephine (she would have been better served cast in cahoots with Olaf). Cedric the Entertainer ("Barbershop 2") adds some heartiness to the proceedings but is miscast as a Victorian era British police detective. Character actor Spall easily inhabits the skin of the blustery banker. Connolly is a likable eccentric for his few scenes, but pity Luis Guzmán ("Anger Management"), Jennifer Coolidge (TV's "Joey"), Jane Adams ("Eternal Sunshine of the Spotless Mind"), Craig Ferguson ("Saving Grace") and Jamie Harris ("Rick") as Olaf's unsavory troupe. The Bald Man, two White Faced Women, Person of Indeterminate Gender and Hook-Handed Man almost disappear into the background. In what may be an in joke, Dustin Hoffman ("Finding Neverland") cameos as a theater-goer who marvels at Olaf's theatrical budget. "Lemony Snicket's A Series of Unfortunate Events" isn't quite the transporting experience I had hoped for, but it gives every indication that the possibility lies ahead.