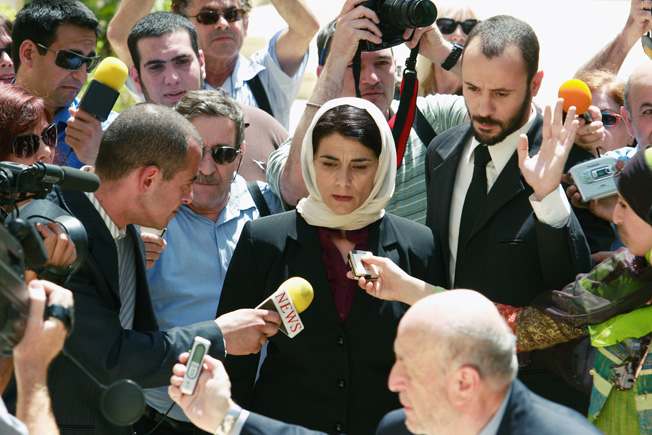 Palestinian widow Salma Zidane (Hiam Abbass, “The Visitor”) farms the lemon grove on the Green Line border between Israel and the West Bank left to her by her late father. It has been in the family for 50 years and she has nurtured her land and its fruit trees faithfully, with the help of her father’s old friend, Abu Hussam (Tarik Kopty). When Israeli Defense Minister Israel Navon (Doron Tavory) moves into his luxury home abutting her land, the grove is deemed a security risk and is ordered, by the secret service, to be cut down. This begins a David versus Goliath conflict that will take the case all the way to the Supreme Court in “Lemon Tree.”

Based on a true story, writer/director Eran Riklis, with co-scribe Suha Arraf, tells the personal tale of two women, one a traditional Palestinian eking out an existence with her lemon grove, the other an Israeli in an unhappy marriage with a powerful politician. Salma toils every day in her orchard, nurturing her trees to bear their tart fruit. Mira (Rona Lipaz-Michael) is ensconced in palatial new home by her husband but it is more a prison for the independent-minded woman, surrounded by guard towers and gun-toting security men. Although they live mere feet apart, their lives are worlds apart. This will all change when Mira’s husband declares that the grove poses a security threat and must be removed. Salma learns via an official letter from the Israeli government stating that her beloved lemon trees are to be cut down in the name of state security. She seeks the help of a young Arab attorney, Ziad Duad (Ali Suliman), to fight the order but the court rules against her. She and Zaid begin the appeals process that will bring them before the Israeli Supreme Court and to the attention of the national media. All the while, Defense Minister Navon pays public lip service to Salma’s plight but, privately, is undeterred in implementing the state order to destroy the beautiful grove. Hiam Abbass, who first came to my attention with her marvelous performance opposite Richard Jenkins in “The Visitor,” gives a powerful perf as put upon Salma. Although she is a second-class citizen and at the mercy of the government’s decision to destroy her grove, she has the fire and backbone to stand up for herself and fight back. Rona Lipaz-Michael, as Mira, is the other side of the coin, as she must cope with her husband’s harsh choice against Salma and her citrus trees. Although she is against the government decree, she is powerless to stop it. Ali Suliman gives an even performance as Ziad, who falls for the older Salma. Their budding romance is nipped by the Palestinian authorities who are more concerned with propriety than with fairness. Supporting cast is effective across the board. Techs are also first rate. Some may perceive “Lemon Tree” as a pro-Palestinian, anti-Israeli treatise that shows the monolithic control held over the Arabs living in the West Bank. But, this is really a little guy against the system story that is more universal than parochial with its combination of hopeful and hopeless resolution to what amounts to a government’s eminent domain over its citizens and their property. The story could take place anywhere – here in the US, South America, Africa or wherever – and its David vs. Goliath theme is worldwide.