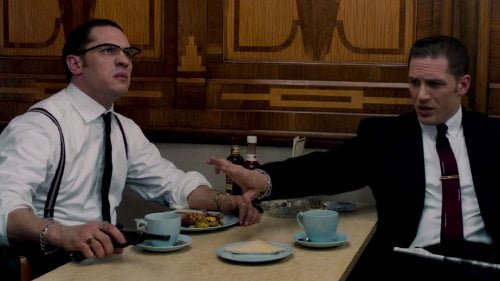 During the turbulent 1950s and 60s, identical twin brothers Reggie and Ronnie Kray (Tom Hardy in both roles) ruled London’s criminal underworld with violence and mayhem and, at the same time, rubbed elbows with ladies and lords of that city’s society. The rise and fall of these notorious mobsters is brought to light, a second time, in “Legend.”

Writer/director Brian Helgeland ("A Knight's Tale," "42") and one man band Tom Hardy take on London's notorious Swinging 60's twin gangsters, the Kray brothers, here portrayed as divided over the more business oriented Ronnie's love for Frances Shea (Emily Browning, "Sucker Punch," "Pompeii"). Hardy is great fun to watch here, especially as the gay-and-proud-of-it madman Reggie, a lusty plug of unfiltered brutality and childlike need. But the film itself is far from his equal, Helgeland's work obviously modeled on "Goodfellas" (among others) and brought low by Browning's narration, so flat she sounds like she's reading a school report. In keeping with the film's irreverent, humorous tone, Jane Wood's ("Vera Drake") Ma Kray is a dotty enabler. Violet had much larger presence in Peter Medoff's 1990 film, "The Krays," indelibly played by Billie Whitelaw (Spandau Ballet's Kemp twins portrayed the brothers). Hardy is masterful, but the older film rules. Grade:

The infamous Kray brothers’ story was told before, in 1990, with “The Krays,” starring twin brothers Martin and Gary Kemp of Spandau Ballet fame. That film followed the notorious criminals from childhood (their mum loved them and they she) to their days moving into the London mob scene. “Legend,” written (from the book by John Pearson) and directed by Brian Helgeland, deals with the criminal siblings after they established themselves as the lords of London’s East End crime world. The story follows the lives of the criminal sociopath twins as they consolidate their hold on the poor side of town, then move onto the more posh West End where the Richardson gang rules. “Legend” shows the lives of two men, born of the same egg, who seem, outwardly, opposites in every way. Reggie, suave and assured, carries the air of sophistication and respectability, even as he orders murder. Ronnie, though, is a very loose canon who’s unpredictable and violent outbursts give the brothers their ruthless reputation. “Legend” is told through the eyes of Frances (nee Shea) Kray (Emily Browning), the very young and attractive woman who fell for unrelenting charm and attention of Reggie. This is the principal problem with the film as the actresses voiceover telling of events sounds read off of a script. The actress’s performance, too, feels scripted and recited, not performed. Likewise, the rest of the cast of characters are left with two dimensioned characters bowing to the powerhouse dual performance by Tom Hardy. It is the actor’s film, hands down. “Legend” is a step by step biographic chronicling of a pair of brothers/businessmen who come to power in London’s crime world, try to gain respectability (well, at least Reggie tried), only to revert to their old ways. It is a riches to rags tale that is interesting enough, but without the screen domineering presence of Tom Hardy, it would barely get notice. Hardy’s dominance in every scene, especially as the certified insane Ronnie, is the reason to see the film.