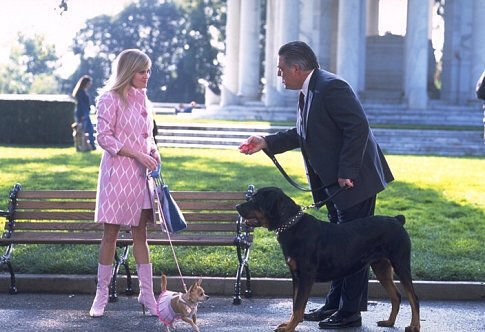 As Elle Woods (Reese Witherspoon, "Sweet Home Alabama") prepares her wedding invitations, she decides the time is overdue to trace her beloved Chihuahua Bruiser's birth mother so she hires a private investigator and is thrilled to learn Bruiser's mom's address is Versace! But this is V.E.R.S.A.C.E., an animal testing facility used by cosmetics firm C'Est Magnifique, and they refuse to relinquish her pooch's parent. Elle decides to take her cause to Washington D.C. and get her Bruiser Bill, to stop cosmetics testing on animals, before Congress in "Legally Blonde 2: Red, White and Blonde."

In addition to bearing one of the year's worst titles, this sequel was skating in on the tails of a marginal movie held aloft by the sheer willpower and charm of its star, so expectations were low at the onset. Lo and behold - "Legally Blonde 2" is one of those rarities - a sequel more solid that the original. This flag-waving film is still as weightless as a bubble, but new screenwriter Kate Kondell (characters by Amanda Brown, story by Eve Ahlert, Dennis Drake and Kate Kondell) and new director Charles Herman-Wurmfeld ("Kissing Jessica Stein") play up "Blonde's" winning aspects and fashion a more consistent confection. The opening credits are worrisome, as the hands of Elle's friends turn the pages of a scrapbook, recounting her exploits from the first film as if the audience were as bubble- headed as Delta Nu's. Enter the irrepressible Elle brandishing a pink diamond (not heart- shaped like JLo's - no copycat fashion statements here) and the hearts of the secretarial pool at her new law office. After a hilarious slide show presentation featuring Bruiser's abandoned background as an indictment of the firm's client, C'Est Magnifique, Elle's new job is no longer, but supportive fiance Emmett (Luke Wilson, "Charlie's Angels: Full Throttle") stands behind her D.C. crusade and off she goes to the office of Representative Victoria Rudd (Sally Field). Dressing for her first day in the nation's Capitol, Elle judges different outfits. "Too Nancy. Too Hillary. Too Monica. Too perfect!" she proclaims a pink Jackie-O inspired suit and pillbox, but, in a running gag, everyone she meets points her towards Room 216 for intern registration. Rudd's congressional aide Grace (Regina King, "Daddy Day Care") is appalled when Rudd gives Elle her seal of approval, but Elle wins over the mousier Renna (Mary Lynn Rajskub, "Punch-Drunk Love") and Timothy (J Barton). As Elle begins her battle to sign up Energy and Commerce Committee Chair Libby Hauser (Dana Ivey, "Two Weeks Notice) and Alabama congressman Stanford Marks (Bruce McGill, "The Legend of Bagger Vance") to her cause, shifting political allegiances below Elle's radar give her unexpected friends and foes. Although one wishes Witherspoon would move on to the edgy indie fare that first brought her notice, she has made the character of Elle Woods a ditzy dichotomy of blonde ambition. Unfailingly optimistic, Witherspoon's Elle is capable of bringing audience spirits up or down along with the corners of her mouth. New to "Blonde 2" is Bob Newhart as Sidney Post, a politically shrewd hotel doorman who guides Elle through Washington minefields. Jennifer Coolidge's ("A Mighty Wind," "Legally Blonde") odd talents are much better utilized as true support rather than supporting subplot. Alanna Ubach and Jessica Cauffiel also return as Serena and Margot, two Delta Nu's who know how to make use of Room 216's intern pool. All these characters, with the exception of Newhart, are of course, playing broad caricatures, as do Ivey and McGill as seasoned vets won over by Elle. Field is low key and not particularly convincing as a former glam girl. Luke Wilson plays Emmett as a man who's been run over by the Elle machine and exists in a state of dazed amazement. "Legally Blonde 2" runs out of steam as it reaches its climax, but it's full of delightful little toss-away moments. In the midst of teaching a Harvard class, Emmett's cell phone rings to the tune of 'Here Comes the Bride.' Elle's apartment features an Andy Warhol style print of Bruiser. Elle arranges for her wedding to be held at Fenway park and her wedding stilettos are delivered complete with pink gemstone cleats. (Once again Sophie Carbonell's costume design is a star in itself.) On the telephone from Boston to Washington, Emmett impersonates Jimmy Stewart's Mr. Smith, whom they are both watching on TV. 'Oooh - is that Sean Connery?' asks Elle. "Legally Blonde 2" will never be mistaken for the classic "Born Yesterday" but one could stretch and consider Judy Holliday's Billie Dawn the spiritual mother of Elle Woods in Washington.