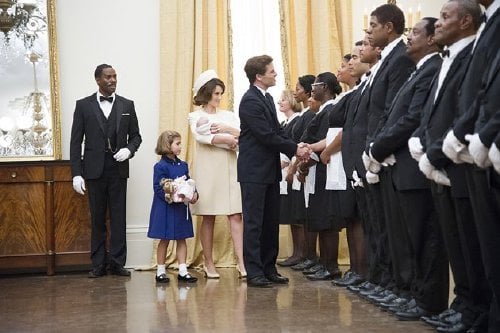 Cecil Gaines was the son of a sharecropper who was shot down in cold blood by the cotton plantation owner before the boy’s eyes. But, fortune changed for young Cecil when the matriarch of the plantation (Vanessa Redgrave) takes him in to work as a house servant. He gets one opportunity after another and, after years of hard work, Cecil is offered a job at the White House, an honor for “The Butler.”

After a cotton farm owner (Alex Pettyfer, "Beastly," "Magic Mike") rapes his mother (Mariah Carey, "Precious") and shoots his father, the farm's matron, Miss Annabeth (Vanessa Redgrave), takes something approaching pity and brings young Cecil Gaines out of the field and into the house to train as a servant (referred to in derogatory terms by the elderly Southern belle). Cecil never aspires to anything more and years later, working in a D.C. hotel, his high standards and apolitical demeanor catch the attention of White House HR administrator R.D. Warner (Jim Gleason). Cecil is hired during the Eisenhower (Robin Williams) administration and works right through the Reagan (Alan Rickman, "Harry Potter's" Severus Snape) years in "Lee Daniels' The Butler." Director Lee Daniels ("Precious") took a critical drubbing for his last racially charged Southern potboiler "The Paperboy," but at least if was entertaining in a lurid, train wreck kind of way. His latest, a heavily fictionalized adaptation of Wil Haygood's article on Eugene Allen by Danny Strong (HBO's 'Game Change'), suffers from a different kind of problem - in an attempt to 'ground' the butler's story, one spends decades in the White House observing Presidents grapple with nothing but civil rights issues. The film certainly works in part (Oprah's just terrific as Gaines' wife), but if two previous Pennsylvania Avenue films this year were dubbed "Die Hard in the White House," this one's destined to be remembered as "Forrest Gump in the White House." Cecil Gaines (Forest Whitaker) is a quiet presence with the smooth intelligence of a diplomat (when the White House Head Butler tells him it's out of the ordinary for staff to be hired over his head, Cecil immediately defers to the man's authority, turning a negative into a plus). But he's not an operator, rather a humble man who keeps his head low and is thankful for what he has. He's a minor celebrity in his and his wife Gloria's circle of friends, but his loyalty to the job takes a toll on his marriage with long hours and a lack of the perks Gloria expected. She begins to drink and falls into an affair with their number running neighbor Howard (Terrence Howard, "Hustle & Flow"). He also falls out with his activist son Louis (David Oyelowo, "The Paperboy") who rides Martin Luther King's (Nelsan Ellis, HBO's 'True Blood') Freedom Bus and eventually becomes a Black Panther (totally fabricated for the film). Cecil's in the room as Eisenhower sends troops to a Little Rock Central High School in support of new federal anti-segregation laws, apparently changes both John (James Marsden, "2 Guns") and Bobby Kennedys' hearts about the civil rights movement when his son is beaten and arrested and provokes an MLK speech on the 'subversiveness' of Black domestics (Daniels' preemptive strike at those who critiqued "The Help?"). He's there when LBJ (Liev Schreiber, Showtime's 'Ray Donovan') conducts business from the toilet and uses racial slurs (and, finally, the Vietnam War is acknowledged - just in time for younger son Charlie (Elijah Kelley, "Red Tails") to enlist). The Carter years are brushed over with a montage, apparently not focused enough on Cecil's family, until Ronald Reagan ultimately disappoints him by refusing to support sanctions against South Africa's Apartheid government. In his old age, Cecil gets to celebrate the election of a Black man into the office he served. The only activism Cecil ventures into is wage equality, a ongoing debate with Warner that he eventually wins by going over Warner's head to Reagan, resulting in a State Dinner invitation for himself and Gloria by none other than the First Lady ('Hanoi' Jane Fonda herself - ha! good one). Gloria's thrilled, finally getting the up close and personal treatment she's always wanted, but Cecil has the opposite reaction, deducting his use as a political symbol. "The Butler" works best when focusing on the Gaines' complex marriage, years of turmoil and arguments and betrayal all founded on a nonetheless strong bond. To a lesser extent, Cecil's relationship with Louis also works, despite the filmmakers insistence on using Louis as a historical device (the nice doctor's daughter (Yaya Alafia, "The Kids Are All Right") he meets at Reed college turns into an Angela Davis lookalike with rude table manners). Oprah is definitely the standout in a huge cast, but Schreiber and Cusack get Johnson and Nixon's conflicted personnas and Rickman makes for a surprisingly good Reagan. Marsden is solid as the President depicted as the closest to Gaines, but for a film that hammers in the White House staff's secrecy oaths, we only get a whitewashed Kennedy with nothing to gossip about. Also good are Adriane Lenox ("The Blind Side") as Howard's wife Gina and Cuba Gooding Jr. ("Jerry Maguire") as White House butler Carter Wilson, a kind of uncle to the Gaines boys who can do a mean James Brown impersonation. Daniels bookends his film with overhead shots of Cecil surrounded by shoes he's shining. In the beginning, a young Cecil is delighted to be working in a hotel. At the end, he's not, perhaps realizing the racial stereotype he's perpetrating.

Apparently, Warner Bros. Studios owns the title, “The Butler,” from a 1916 silent short, so the Weinstein Company decided to release the film as “Lee Daniels’ The Butler,” crediting the director above the title. This pretension proves unrealized with its personal, decades-long (and often uninvolving) story (“inspired by a true story”) of a man who was a butler to American presidents from Eisenhower to Reagan. The other half of the film, though, gives a chronology of civil rights in America from the Great Depression on through the Reagan era through the eyes of Cecil’s son Louis. This half of the film is more of a history lesson than anything else. The cast is a who’s who of American actors, both black and white, but most are cameo appearances, such as Robin Williams as Dwight D. Eisenhower, John Cusack as Richard Nixon and Jane Fonda as Nancy Reagan (a beautiful bit of ironic casting). Forest Whitaker is rather a blank cipher in the film until near the end when he developed some personality. Throughout most of “The Butler” Whitaker embodies the White House servant ethic: “you see nothing, you hear nothing. You just serve.” While Whitaker’s Cecil is bland, Oprah Winfrey is a fireball as Cecil’s wife and the mother of their two boys, Gloria. She creates a real character with real needs and desires, things that Cecil has overlooked or neglected. For instance, when he begins working at the White House, Cecil promises Gloria that he will, some day, take her there. It takes Nancy Reagan and 50 years for this promise to be fulfilled. Oprah is on my long list for award consideration for best supporting actress this year. David Oyelowo gives a lot of energy to his performance as Cecil’s rebellious son, Louis, as he represents the Civil Rights activists. I liked Louis’s story and militancy and was most interested in him and his life than I was for Cecil’s. First time feature film writer Danny Strong (who fictionalized the 2008 Washington Post article by Wil Haygood, A Butler Well Served by This Election) gives such a focus to the civil rights movement in America over five decades it would seem that nothing else happened in the news. You see the marches, protests and violence of the struggling black civil rights movement. But, aside from a very brief allusion to Vietnam, one would think that nothing else happened for over 50 years. No Cold War, no space race, no man landing on the moon, no military-industrial complex. no cures for disease. None of these things seem to have happened in Strong and Daniels’s world, making “The Butler” simplistic. I expected more than just highlights in America’s civil rights history.