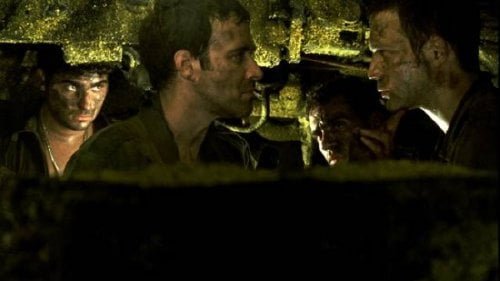 In June 1982, the Israeli Defense Forces attacked their neighbor and began the First Lebanon War. A solitary tank crew joins up with a paratroop platoon and the commander gives them orders to help clear a hostile town, telling them it is going to be “a walk in the park.” He is as wrong as he can be and the battle weary troopers must fight their way into “Lebanon.”

In the summer of 1982 writer/director Samuel Maoz was a tank gunner in the Israeli Army. He recounts his experiences as a form of therapy, much like Ari Folman did with his animated "Waltz with Bashir," by putting his audience inside a facsimile of his hot, fetid and claustrophobic tank to attempt to process the horror seen through his gun site heading into "Lebanon." This winner of the 2009 Venice Film Festival Golden Lion has invariably been compared to "Das Boot," but it really has more in common with a film such as "Cloverfield," where we experience unknown horrors through a viewfinder along with the film's characters, crossed with the snaps of a war photo journalist. "Das Boot" may have been claustrophobic, but we generally knew what was going on. In "Lebanon," we're often in the dark. The tank known during radio communications as 'Rhino' is commanded by the inexperienced Assi (Itay Tiran, "Beaufort"), determined to inflict his power on even his friend, gun loader Herzl (Oshri Cohen, "Beaufort," "Agora"). It's pretty clear Assi's behavior is driven by fear and Herzl isn't afraid to push back, especially when his orders make no sense. Maoz's stand in is Shmulik (Yoav Donat), who, when ordered to shoot for the first time, hesitates, resulting in the death of a fellow soldier, one whose corpse must then be transported by them, a recriminating 'angel' (the Israeli's term for a dead soldier). Last is the youngest, most naive member of the group, Yigal (Michael Moshonov, "For My Father"), who is the only child of aging parents. Their real leader is Jamil (Zohar Shtrauss, "Beaufort"), a Major who frequently drops into the tank to outline their orders without providing much in the way of moral support. When he tells them their first assignment is to block the road and fire upon any approaching vehicles that do not stop, he also informs them that this part of their assignment will be a 'walk in the park' compared with when they get to 'San Tropez,' a location mysterious to all of them. Maoz most keeps his action inside the tank where tensions among the men rise. After Shmulik overcompensates for his first gunner attempt (Maoz's attempt to portray a chicken farmer maimed in the process is staged like a 1970's gore film, not very convincingly and more than a bit obviously), he invites Assi to take his turn at the trigger and set him an example. Assi backs down on his criticism. Our view of their progression is a series of changing viewpoints as Shmulik moves the gun turret to approximate head movement, then zooms in, usually to try and determine what the ground soldiers and Jamil are saying. The device more approximates the viewfinder of a camera and calls attention to itself, especially when the objects it finds are so artfully arranged for the camera (a terribly injured donkey's eye streams tears once Shmulik's site has determined it is still alive by focusing closely on its moving nostrils). Maoz gets firmer footing once his tank has made it to the bombed out city it is tasked with sweeping by bringing in more external human influences. We see an innocent family sacrificed to take out a sniper, the mother (Reymonde Amsellem, "Rendition," heartbreaking), crazed, trying to make human contact with a soldier who cannot assist her. Jamil tasks them with transporting the Syrian captive (Dudu Tassa) who fired upon and severely disabled their tank and the phalangist (Ashraf Barhom, "Paradise Now," "Agora") who they may or may not be able to trust who drops in to torment the man in a language none of them understand. But the tanks stopping point, the remains of a travel agency, is an obvious bid for irony with images of Big Ben, the Eiffel Tower and the twin towers of the World Trade Center. The final act isn't as terrifying as it should be. Rhino ends up off course, Jamil gone, leaving only that questionable Christian Arab to guide them out of real and serious danger. The music they hear blaring will immediately recall "Waltz with Bashir's" nighttime massacre. The abrupt ending gives us one last external image of the tank in a setting as far removed from what has come before as possible. "Lebanon" is certainly a unique look at war, and, along with "Waltz with Bashir" and "Beaufort" begins an exploration of the Israeli need to question their political past. It's not subtle, its crosshairs POV somewhat unnatural, but the director's point of view comes through loud and strong.

Tyro feature director/writer Samuel Maoz joins the ranks of war filmmakers in the tradition of “Das Boot.” Shot almost entirely from within the confines of the Israeli tank, the only outside point of view is from the gunner’s periscope manned by the new, untested guy on board, Shmulik (Yoav Donat). The cramped, claustrophobic confines provide the setting for the confusion and terror of battle, especially for the conscript tank crew. Tank chief Assna (Reymond Amsalem) has his hands full trying to command his crew of draftees – gunner Shmulik, rebellious loader Yigal (Michael Moshonov) and driver Herzel (Oshri Cohen). His problems are compounded by paratroop major Gamil (Zohar Shtrauss) whose orders come down from higher command. Within the tank, Yigal questions Assna’s authority, making for a psychological battle within the tank while real war goes on outside. The script, by Maoz, is long on talk, but the dialog is believable as the tankers try to cope with the constant danger and confusion of war. Sound design is simply incredible with the roar of the engine, the clanking of the treads and grinding of the tank’s turret as gunner Shmulik scans the battleground with his gun sight, snapping in different lenses to observe the devastation up close. Cinematographer Giora Bejach uses the periscope perspective effectively to give us the only view of the war. Too often, though, the lenser utilizes the device of victims staring directly into the gun sight with meaningful looks of anguish, hate, sorrow and grief. This can be forgiven as first-timer excess. The director has a lot to say in this earnest anti-war drama as seen through the eyes of the IDF tank crew. The muddle of languages includes Hebrew, Arabic and English; sometimes all used at once as the combatants try to communicate with each other - Muslim, Christian and Jew. This jumble of lingo adds further confusion to the fog of war and ramps up the tensions of the “Lebanon.” There are no good guys or bad guys here, just the victims, soldier and civilian, who suffer the casualties that their leaders force them to withstand. The mental damage that war is palpably shown by those called to place their lives on the line because one country opposes the religion of another. Maoz creates a complex, tightly woven story that questions war. Is it worth the price of human lives?