Leaves of Grass on DVD 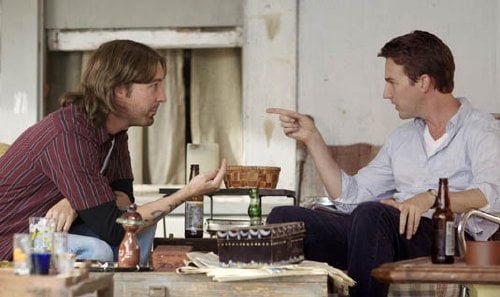 Bill Kincaid (Ed Norton) lives a quiet, scholarly life as a classics professor at Brown University. A childhood friend, Bolger (Tim Blake Nelson), contacts him from back home in Oklahoma with bad news. Brady (also Edward Norton) was killed with a crossbow during a drug deal gone sour. Bill rushes back to the birthplace he left 20 years before only to find Brady alive and kicking. Brady wants to use his twin brother as an alibi so he can go north to do some business in “Leaves of Grass.”

Everything's going right for popular philosophy professor Bill Kincaid (Edward Norton) - women love him and Harvard University's Law School is wooing him. Then he gets the news that his twin brother, pot dealer Brady, has been killed with a cross bow and Bill has to face the life he left behind in Oklahoma in writer/director Tim Blake Nelson's ("Eye of God," "The Grey Zone") "Leaves of Grass." This is a very personal film from Nelson that is jam packed with ideas and heavily influenced by the Coen Brothers (it's rather Fargoesque), but despite a terrific dual performance from Norton (and a wonderfully down to earth and warm turn from Keri Russell as a catfish-catching poet), it never really gels. Oddly, though, the DVD treatment elevates the experience - watch the film a second time with a lively, funny and irreverent commentary track featuring Nelson, Norton and William Migliore and it all pulls together. Sure, a movie should be able to stand on its own, but this commentary track is both insightful and entertaining. When Norton isn't playfully pushing buttons, we learn, for example, that the production was able to obtain all their fake weed from "The Pineapple Express." Bill's picked up at the airport by Bolger (Tim Blake Nelson, Norton's "The Incredible Hulk" costar), who stops by Broken Bow's local country store to give rival pot dealer Buddy Fuller (Singer/guitarist/songwriter Steve Earle) an eyeful of mistaken identity. Bill quickly learns that Buddy's not really dead, he just lied to lure his brother home to use as an alibi. Buddy's got some bloody business in Tulsa where Pug Rothbaum (Richard Dreyfuss) controls local drug businesses. The mix of hillbilly dealers and the local Jewish minority (which includes a female Rabbi, played by Maggie Siff, "Mad Men's" Rachel Menken, and an orthodontist, played madly by the hilarious Josh Pais) begins comically, much like "Fargo's" hapless criminals, but takes on a tone-shifting combustibility in the film's last act. Nelson's built his film on philosophy jokes and foreshadowing mixed with the humor derived from his Oklahoma setting as represented by the uptight, straight-laced Bill and the twangy down home Brady. It's an interesting twist that Brady is actually the smarter of the two, but less able to navigate life. Watching Norton act with himself is worth the price of admission. Norton's making this duality of character a speciality of his as can be seen in his breakout film "Primal Fear" or the upcoming "Stone." Unfortunately, Nelson's made the decision to begin their interactions with the old fashioned split screen device which only calls attention to itself, but as the film goes on, the two Nortons cross paths more naturally. The characters also cross spiritually, with Bill convinced to take a toke and consider Janet's (Russell) analysis of Walt Whitman (while she's gutting a catfish!). But the film isn't as funny as it should be, despite some terrific moments (Brady's vintage blacklight poster collection for one). While Russell and Pais stand out, much of the support is wasted. Susan Sarandon's hippie mom isn't divisive enough for Bill's resentment. "Two and a Half Men's" Melanie Lynskey offers only a local accent as Brady's pregnant wife. Even Dreyfuss makes no impact in what should be an over-the-top performance but isn't. "Leaves of Grass" is a classic case of interesting failure, but Nelson's put so much of himself into it and Norton so obviously loves the project that one can see the leaves if not the tree. There's something about a film that can make Heidegger jokes that reverberate later all set to music by Little Feat and Townes Van Zandt. The DVD: The film is presented in full screen (it was shot in 1:85 aspect ratio). Besides that terrific commentary, the DVD also features a worthwhile 'Making of' featurette (which, oddly, doesn't really get into the special effects used to put two Nortons on screen) and the film's trailer. Both English and Spanish subtitles are available as is scene selection.

Ed Norton takes on the dual role of twin brothers and creates two distinctly different characters. Bill left home without looking back and immersed himself in East Coast academia, striving hard to lose his Oklahoma drawl and his hillbilly past. Brady, on the other hand, is a free spirit who makes his living by growing and selling premium weed. There is mob trouble brewing up in Tulsa and Brady needs Bill to pose as him while Brady tries to fix the problem. The title for “Leaves of Grass” has double meaning. There is the marijuana aspect with Brady’s obsession for producing the best weed – which is the cause of his troubles with the mob, led by The Jew (Richard Dreyfus). The other meaning refers to Walt Whitman’s 1855 book of poetry by the same name and the poet’s verse is used effectively by Keri Russell as Janet. She left town years ago to find her calling as a poet. She returned home though, missing family and friends, and comes to Bill’s romantic attention. This little tête-à-tête is a nice diversion from the drama and comedy that make up the bulk of the film. The screenplay, by director Nelson, is uneven and he relies on his talented actors to breathe life into their characters. Norton does a fine job portraying twin brothers who are anything but identical. Where Bill is uptight, Brady is laid back. Of the two, I like Brady a lot more than I do Bill. Tim Blake Nelson may have taken on too much with writing, directing and a co-star. He is likable enough as Brady’s best friend, Bolger, but the character is under drawn and forgettable. Susan Sarandon is underutilized as the Kincaid boys’ mom and Richard Dreyfus holds little menace as the crime boss. There is a significant side story when Bill bumps into an out of work orthodontist (Josh Pais) on his flight to Oklahoma. This chance meeting will have a grave impact but this feels tacked on and diluted. The DVD extras give the film a boost with a well done “making-of…” featurette and a commentary of the film by director Nelson, star Norton and producer William Migliore. The latter commentary is oftentimes better than the movie and gives insight into the complexity of Norton’s character portrayals.