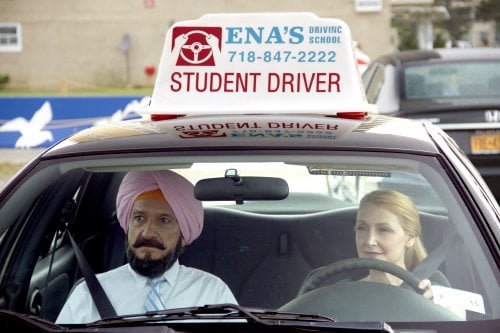 Sikh NYC cabbie Darwan (Ben Kingsley, "Elegy," "Shutter Island") is put into an uncomfortable spot when a crazed woman (Patricia Clarkson, "Elegy," "Shutter Island") jumps into his customer's ride. Wendy is distraught, having just been dumped in a public place by her husband of twenty-one years. Ted (Jake Weber, "White House Down," TV's 'Tyrant') pays her fare home and leaves. When Darwan reappears the next day to return papers she'd left behind, she notes he's now piloting a driver's ed car and so she chooses the gentle man for "Learning to Drive."

This female written (Sarah Kernochan ("Sommersby") adapting Katha Pollitt’s New Yorker essay) and directed (Isabel Coixet "My Life Without Me," "Elegy") vehicle is one of those metaphor for life movies where two characters of wildly different backgrounds help each other through parallel experiences. It would all seem extraordinarily trite were it not for the calibre of filmmakers and cast. "Learning to Drive" is a lovely story of moving out of middle aged comfort zones during times of romantic crisis rendered both humorous and affecting by leads Clarkson and Kingsley. Wendy's in denial about being left for another woman. All she can fathom is her husband's professional jealousy, untenured after twenty years as an English professor while she's a prominent literary critic used to frequenting talk shows. When their daughter Tasha (Grace Gummer, TV's Extant,' "The Homesman"), home from school in Vermont, admits to plans for dinner with dad, Wendy decides that accepting her offer to drive up for a visit will win her over to her side. Darwan's already exhibited kindness and he proves a patient and observant teacher. Their unintentionally intimate introduction clears the way for quick confidences. He discovers the Upper West Side woman worships the written word but is afraid to move outside the pages of her books. She finds a highly intelligent political refugee who's rejected more prestigious work to retain his cultural identity (outwardly with his turban and beard) in an adopted country that misjudges him for it. Their excursions around the city of New York open up new vistas for each (cinematographer Manel Ruiz opens up the car-bound shots, letting us see non-traditional NYC vistas as if a ridealong passenger). He takes her to his Queens neighborhood, only to be surprised by her knowledge of it (she grew up there, her father's early abandonment informing her current panic). She's incensed by the casual racism directed at her friend while he turns the situation into life lessons via comments on diverting road rage. When she learns he's getting married to a woman he's never met, he explains that family has a better perspective in choosing one's mate, his sister having found Jasleen (Sarita Choudhury, Showtime's 'Homeland'). Of course, the screenplay counters with Wendy's sister springing a surprise blind date, Pete (Matt Salinger) a practitioner of tantric sex. Both new relationships encounter bumps, Darwan's response to his new bride not unlike Wendy's treatment of her soon-to-be-ex and when Darwan responds by clutching onto the known, Wendy gently releases him with words of loving wisdom. Tasha has parallels here too, afraid to move on when a boyfriend leaves her high and dry, while Darwan's illegal nephew Preet (Avi Nash) decides to throw his lot in, blending into the American landscape, a skill Jasleen struggles with until friendly expat Mata (Daniela Lavender) takes her in hand. The film has an airy, upbeat close, full of promise for the future, Wendy on the road in her new car, the color of Jasleen's bridal gown. Grade: