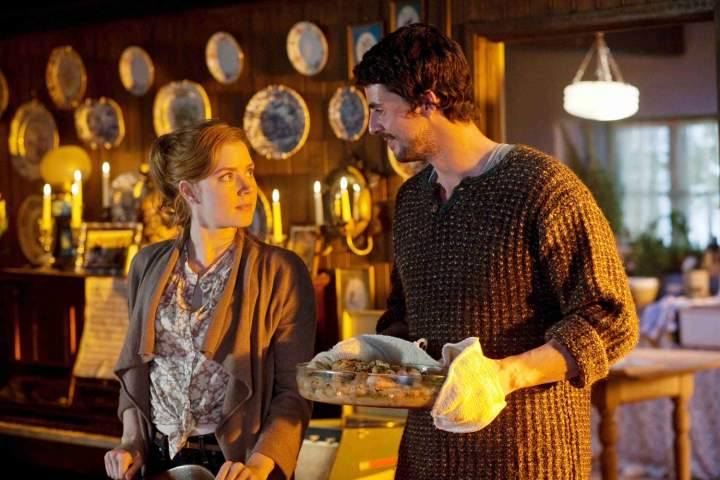 When Anna's ( Amy Adams, "Enchanted," "Julie & Julia") boyfriend Jeremy ( Adam Scott, "Knocked Up," " Step Brothers") presents her with diamond earrings instead of the expected engagement ring , she decides to take matters into her own hands using the Irish tradition that a woman may propose to a man on February 29, but once in Ireland her plans are derailed when she meets a local, Declan (Matthew Goode, "Watchmen," " A Single Man"), during " Leap Year."

This film is a wallow in sub-mediocrity not only by stars Adams and Goode, who somehow remain likeable, but for director Anand Tucker (" Hilary and Jackie," "And When Did You Last See Your Father?") as well. What is undeniably the worst aspect of the movie, however, is that screenwriters Deborah Kaplan & Harry Elfont's (" Surviving Christmas," "Made of Honor") work is being treated as original when what they have done is a charmless hack of Powell and Pressburger's " I Know Where I'm Going" with a dash of "Local Hero's" (itself based on "I Know Where I'm Going") all purpose innkeeper thrown in. About all "Leap Year" has going for it is its scenery (which includes Goode and Adams). In "I Know Where I'm Going" a wealthy woman has a difficult journey to a Scottish isle where she is set to marry her industrialist fiance. Bad weather keeps her from making her final crossing and she meets the penniless local Laird who dances with her at a local caleigh and has a charming family legend tied to the ruins of a castle which ends up applying to them. All Kaplan and Elfont have done is transfer the action to Ireland and thrown in the Leap Year twist. Otherwise their heroine has an arduous journey to become engaged, meets a local pub owner who takes her to a ruined castle and tells her its legend, which mirrors what is happening with them and dances with her at a local wedding which they crash. In both, the woman's big city ways are brought down to earth, but in "Leap Year" she's turned into a fool who wears $600 peep-toed platforms in the dead of winter, through hurricanes and cow pastures, even knocking out a bride by flinging one while dancing (a scene as painful for the audience as for the bride). Further, the filmmakers make some seriously lazy gaffes regarding time tables. The 'Boston' opening is not only clearly not Boston (aside from an establishing skyline, the film was shot entirely in Ireland), but cinematographer Newton Thomas Sigel's ("Valkyrie") lighting is so harsh, one can see every pore and downy hair on Adams's face. Things improve when the action changes to the Emerald Isle where interior lighting becomes much warmer and locations are often breathtakingly beautiful. Adams's Anna is a bit of a pill and it's difficult to buy into Declan's romantic feelings for her, but the actress's natural glow and spirit eventually just squeak through (which, frankly, is what happens with "I Know Where I'm Going's" Wendy Hiller although Hiller kept her dignity intact). Matthew Goode has slowly been building a solid and varied filmography and remains very appealing in not very good movies, "Leap Year" being his only misstep since his American feature debut in 2004's " Chasing Liberty" (a film I only remember for having taken note of the actor). Third billed John Lithgow (SHOtime's "Dexter") has only one short scene as Anna's irresponsible father who sets up the Leap Day proposal concept. Veteran Irish character actors Tony Rohr and Maggie McCarthy add some color as a Stationmaster and his wife who run a romantic but morally strict B&B. The film wraps just the way one would expect, with a contrived bump in even the final scene which sends Anna, in one of the ugliest dresses a woman could pick to woo a man, out to scenic Irish cliffs. Kaplan and Elfont, whose (worse) " Made of Honor" involved an American going to Scotland and getting engaged to a local, definitely need a change of scenery - go Brách.