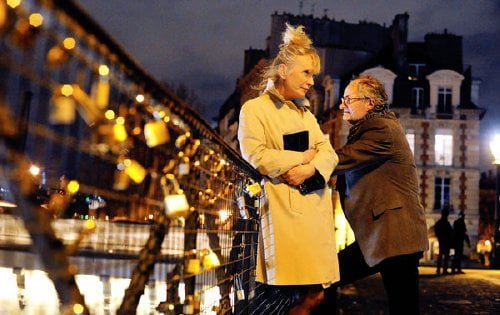 Nick (Jim Broadbent, "Moulin Rouge!," "Cloud Atlas") and Meg (Lindsay Duncan, "About Time") decide to return to the scene of their honeymoon, Paris, to celebrate their 30th wedding anniversary, but once there, they disclose very different personal agendas for "Le Week-End."

With their third collaboration, writer Hanif Kureishi and director Roger Michell ("The Mother," "Venus") attempt an examination of a long lived-in relationship a la "Before Midnight," but although certain observations strike a chord and individual scenes work, "Le Week-End" feels stagey and doesn't breathe - it's all highs and lows with little middle ground, bipolar cinema. After an arduous journey from Chunnel train to local Metro and being lost on foot, the couple arrive at their honeymoon 'Hot l' and Meg wants nothing to do with a monastic beige room. Having already demanded control of their Euros, Meg hails a cab and starts flinging large bills at the driver as Nick panics. After driving all about the city, she has him stop at the Hotel Plaza Athénée which only has a suite available. They take it, but Nick starts to worry when Meg begins canvassing the mini bar. Clearly he's thrifty while she wants to throw caution to the wind. The couple keep seesawing between irritation and deep commitment and both of them are about to spring a major life event surprise on the other. Nick obviously wants to resuscitate their sex life, but Meg isn't interested, at least until it suits her to appear so. Duncan does a fabulous job of conveying that while she doesn't want to be harnessed to her stodgy husband, she's going to use her pull over him to enjoy the adventure, which includes visiting Père Lachaise Cemetery and skipping out on a pricey restaurant bill. But there's also something deeper still going on here and a chance meeting with a pretentious and successful American academic friend of Nick's brings everything to a head. That would be Jeff Goldblum in one of his friskiest performances as the obsequious Morgan, a man everything Nick is not with his ritzy Parisian address, freshly published book and new, much younger, adoring wife Eve (Judith Davis). He runs into the couple on the street during one of their 'up' moments, kissing passionately in public, and invites them to a party the next evening. Nick and Meg arrive over dressed and are introduced to everyone, Morgan truly pleased that they are there, but when he pulls Nick aside to get him to invest in an intellectual undertaking, Meg's approached by an interested younger man on the balcony. Toasts are made at dinner and after Eve praises her husband, Morgan turns to Nick and tells a laudatory and revealing story, opening the door for Jim Broadbent to just about run away with the film with his response (as if he hadn't already drunkenly singing and dancing to the old rock tunes on his iPod after he's been shut down). Broadbent and Duncan get that connection where behavioral tics both irk and delight and shared memories are a bedrock. We honestly have no idea which way the tide will turn with these two and Goldblum's a terrific catalyst. Michell frames Paris as a city of dreams without overdoing the postcard shots so that when they appear - the terrific view of the Eiffel Tower from a Plaza balcony, for example - they have an impact. But the exploits he and Kureishi put their protagonists through lean towards the extreme for just one weekend - the film has none of the more leisurely, natural pace of Linklater's relationship trilogy. Just when you think they've painted themselves into a corner, they leave us with a bit of whimsy, recreating Jean-Luc Godard's "Bande à part" Madison dance scene, but that requires a three and it's unclear if Nick and Meg will still stand without that third support. Un Week-end à Paris doesn't make one wish to prolong the stay.