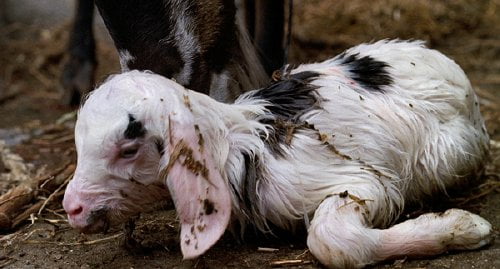 An old goatherd (Giuseppe Fuda) trades fresh milk for the sweepings from the Church floor that he believes restores his health. A baby goat allowed out with the herd for the first time cannot keep up and becomes lost, nestling at the base of a giant pine. The tree is cut down and carried into town to be erected as the focal point of an annual festival. Later, cut into pieces, its wood is sold for use at the local charcoal kiln. These are four times, "Le Quattro Volte."

This is also just about the entire 'plot' of writer/director Michelangelo Frammartino's second film, but despite its seeming simplicity, the film is thoroughly engrossing. It is the rare film that calls to mind such disparate works as "Au Hasard Balthazar," "Hukkle" and "Local Hero" while creating its own cinematic world. Frammartino's opening shot is mysterious - are we looking at an active volcano? No, this is the charcoal kiln, as used for hundreds of years in a Calabrian mountainside town. At first, we believe this is the ash the old goatherd mixes into a glass of water and drinks before going to sleep for the night, but will learn differently. The people of this town engage in many old rituals, most tied to their Church, but it is the natural world which links everything together - man, animal, vegetable and mineral - in a cycle of life, a form of descending reincarnation, most literally ashes to ashes. With the goatherd, the camera moves about, following this old man as he takes his flock far out of the town and spends his days in quiet contemplation. There are many closeups of goats. When the man relieves himself in the tall grass, ants swarm his leavings and the scrap of paper he used stares back up at us, the eyes from a female face in a magazine. At the end of the day, the goats are herded back into the town and put in a pen where the road into town forks. Here Frammartino has placed a camera high up to observe comings and goings by panning left and right. The goatherd arrives at the church to find it locked tight, not a good omen, but before the inevitable tragedy, comedy ensues. The goatherd's fading sight is fixed on one of his goats, but how it arrived there is delightful. After fading to black, which the director does between each segment, the next thing we see is the swift birth of a kid. Now we're observing the flock from within and again, the director mixes the every day with the extremities of existence. Part three, the life and death of the giant pine, reflects back on the first segment's Passion Play. We'd observed the townspeople preparing, the cross being carried out of the town. Now the giant tree trunk is carried in. By the time we arrive at the final segment and understand the laborious ritual we are watching, we realize that the sound of the workers shovels tamping down the mount have been hears throughout, one of the cycle's audible connections among its four 'times.' We never hear the goatherd speak. In fact, this Italian film has no subtitles. Like "Hukkle," the movie unfolds almost completely free of dialogue, the only voices we hear distant shouting. Frammartino tells his story not only with his images, both intimate and distantly observational, but with the sound of bleating goats and the wind moving through the trees. "Le Quattro Volte" is not a film for all audiences, but those with the patience to look for what it has to say will be greatly rewarded. A Robin: Robin gives "Le Quattro Volte" an

Fresh out of the French police academy, Antoine Derouere (Jalil Lespert), instead of taking an assignment in his rural hometown in Normandy, decides to separate from his schoolteacher wife and opts to be assigned to the Paris police homicide squad. This decision will prove catastrophic for “Le Petit Lieutenant.” Le Petit Lieutenant” is an interesting crime thriller that has few conventional “thrills” but does give a fascinating look into the mechanics of a Parisian homicide squad. Crime is handled in a routine, procedure-driven manner as the title character and his colleagues investigate the murder of an illegal Russian immigrant. The details of the investigation, as the cops painstakingly follow leads and clues, is the meat of the movie and holds your interest throughout. Veteran French actress Nathalie Baye, as Commandant Caroline Vaudieu, is the center of the homicide squad where the title character is assigned. She has a history of alcohol abuse but has it under control and is a strong, capable leader able to both give and take orders. While Jalil Lespert is the central figure as Lieutenant Antoine Derouere, Baye holds the screen with her commanding performance. The other members of the squad, led by veteran cop Solo (Roschdy Zem), also help flesh out things to make this a believable and interest-holding police story.