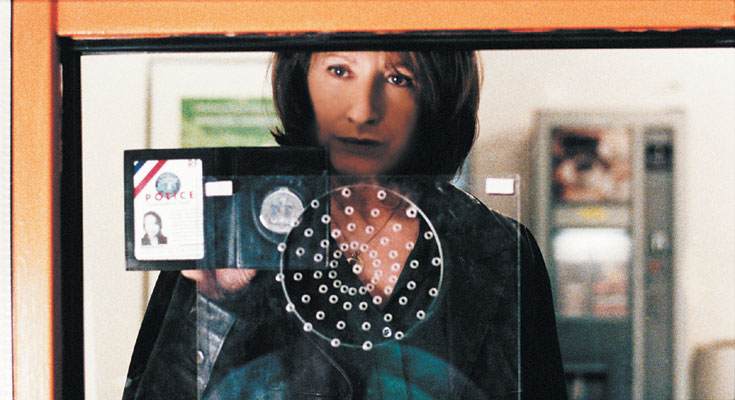 Police academy graduate Antoine Derouère (Jalil Lespert, "Sade," "Not on the Lips") requests and receives assignment with a Parisian homicide unit which is newly headed by Commandant Caroline "Caro" Vaudieu (Nathalie Baye, "Catch Me if You Can," "The Flower of Evil"), a recovering alcoholic. Caro is respected by her men, but she has a special affection for the new recruit who she calls "Le Petit Lieutenant."

Cowriter (with Cédric Anger)/director Xavier Beauvois ("Ponette," "Arsène Lupin") uses the investigation of one crime, a series of murder/muggings on the banks of the Seine, to string together a character piece that is as much about the character of a Parisian homicide squad within a police department as it is a study of some of the individuals who comprise it. This is a thoughtful warts and all look at a profession that enforces long stretches of tedium with shots of impossible to anticipate danger and although the film is similarly paced, with no action to speak of until very late in its game, it intrigues throughout. Antoine, who didn't tell the wife he left behind in Normandy that it was his choice to go to Paris, soaks in his new surroundings. He's jocular with the guys at lunch, discussing the conjugal rights of an imprisoned serial killer, and later that night at a bar, where he has too much to drink. Caro eyes the bottles on the shelves as she sips sparkling water, then gives the guys affectionate pecks and leaves. The next day, they're called for a corpse in the river, one Antoine recognizes as a homeless guy they had in the drunk tank a couple of days prior. Questioning of homeless men in the area turns up one guy, Kaminsky (Wieslaw Puzio), who claims he saw the deceased with 'two Russians' the night before. Frustrated with the lack of information they have to go on, Caro directs her men to begin the drudgery of trying to find a needle in a haystack. "Le Petit Lieutenant" is filled with the details of squad life, from horrific gruesome crime scene photos and autopsies to killing time on a late night shift. There are constant notes of the little transgressions the veterans forgive each other which innocent Antoine initially recoils from, then gradually accepts. Ironically it one be one of these little slips that will cost one of the squad their lives - and still, colleagues protectively rally 'round. Nathalie Baye, who had a stateside breakout role almost twenty-five years ago in Bob Swaim's French policier "La Balance" playing a prostitute, has come full circle, now in charge of les flics. Caro is a very flawed character, still in pain over the death of her son decades ago, but nonetheless Baye makes Caro commanding, someone with sound judgement, even if she does smoke weed with her young charge. Jalil Lespert is just right as the big, strapping and enthusiastic new lieutenant who shouts 'Paris is mine!' with his first opportunity to employ his police siren. Roschdy Zem ("My Wife Is an Actress," "36 Quai des Orfèvres") is Solo, a Moroccan who explains the early prejudice shown him matter-of-factly and who now is an essential component of the squad. Antoine Chappey ("5x2") is Louis, Solo's best buddy and one of the more senior group members. If "Le Petit Lieutenant" has a problem, it is that after these four, most of the other cops blend into the background, but Beauvois still gets a broad spectrum to come across on the screen. For a film with little action, location filming moves across the entirety of France, from the northern Normandy coast to sunny Nice in the south but the optimism of the young man from Le Havre gives way to the weight of experience carried by Caro when she wraps her investigation on the Riviera.

Fresh out of the French police academy, Antoine Derouere (Jalil Lespert), instead of taking an assignment in his rural hometown in Normandy, decides to separate from his schoolteacher wife and opts to be assigned to the Paris police homicide squad. This decision will prove catastrophic for “Le Petit Lieutenant.” Le Petit Lieutenant” is an interesting crime thriller that has few conventional “thrills” but does give a fascinating look into the mechanics of a Parisian homicide squad. Crime is handled in a routine, procedure-driven manner as the title character and his colleagues investigate the murder of an illegal Russian immigrant. The details of the investigation, as the cops painstakingly follow leads and clues, is the meat of the movie and holds your interest throughout. Veteran French actress Nathalie Baye, as Commandant Caroline Vaudieu, is the center of the homicide squad where the title character is assigned. She has a history of alcohol abuse but has it under control and is a strong, capable leader able to both give and take orders. While Jalil Lespert is the central figure as Lieutenant Antoine Derouere, Baye holds the screen with her commanding performance. The other members of the squad, led by veteran cop Solo (Roschdy Zem), also help flesh out things to make this a believable and interest-holding police story.