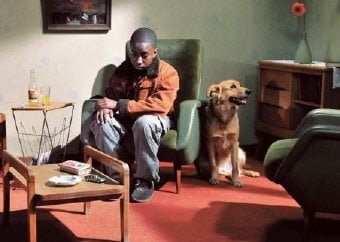 Marcel Marx (André Wilms, "Europa Europa," "Hell") is an aging shoeshiner finding it more and more difficult to earn a living. His wife, Arletty (Kati Outinen, "The Man Without a Past"), carefully manages the purse strings. Their life is thrown up into the air by two parallel events - Arletty is hospitalized with a fatal illness she keeps from Marcel while he takes in Idrissa (Blondin Miguel), a young illegal immigrant from Gabon whose shipping container didn't make to London when it was discovered in the French port of "Le Havre."

There's no mistaking a film by Finnish writer/director Aki Kaurismäki ("Leningrad Cowboys Go America," "The Man Without a Past"), with his deadpan comedic style and championing of society's underdogs. "Le Havre" is one of his best, a film whose protagonist's name is a clear indicator of one theme while Idrissa, which means 'immortal,' leads the charge of Biblical references. Marcel spends most of his time evading irate shopkeepers or having them evade him, but he's clearly well-regarded by women - Arletty gives him money for a drink at the bar where Claire (Elina Salo, "The Man Without a Past") pours on the house. Breadmaker Yvette (Evelyne Didi, "Story of Women," "Baxter") continues to supply him despite his unpaid tab. Meanwhile Inspector Monet (Jean-Pierre Darroussin, "Red Lights," "Conversations with My Gardener") is called to a shipyard where workers have reported human cries coming from a container. Upon opening it, he finds mothers with children, old men and young, one of whom slips out and away. Le Havre's police go into high gear to find the young boy, but Marcel finds him first, leaving him food and money. That night Marcel also finds Arletty crumpled on the kitchen floor and with Yvette's help gets her to the hospital. He's not alone for long, as Idrissa replaces her, curled up outside his door with his dog, Laïka. The whole neighborhood pitches in to help the boy whose presence is supposedly a secret. Even the grocer, Jean-Pierre (François Monnié), who used to hide from Marcel's penniless patronage, suddenly has overstock. And so Kaurismäki weaves four overlapping trajectories - Marcel's search to find Idrissa's family, Arletty's quest to shield her husband from her diagnosis, Idrissa's inability to stay hidden and Monet's investigation. The story is full of ironies, symbolism and mysteries. Marcel, the man his wife considers a child, manages to bluff a refugee center director and put on a charity concert. The Marxes dwindling coffers coincide with abundant generosity and while Arletty chides Marcel for spending money on the red carnations he brings her, we're given no explanation for the yellow orchid which appears later in her room, sharing the color of the dress she's requested from home, one which does not serve the purpose she'd intended for it. The director rarely moves his camera and maintains the blue of his preferred color palette. His Le Havre is a place of baguettes, red wine and accordions, a fantastical reality. Wilms is one of his more expressive characters while Outinen, a veteran of many of his films, remains largely expressionless. Look for Jean-Pierre Léaud ("The 400 Blows") in the film's darkest role as Marcel's traitorous neighbor. "Le Havre" is miraculous in its creation of a kind of utopia out of a depressed neighborhood in a northern French sea port. Kaurismäki can almost restore your hope in humanity.

Marcel Marx (Andre Wilms) owns a tiny shoeshine business in a Normandy port city in France. Business is not good and his neighbors, local merchants, grow tired of always giving credit instead of getting the Euros he owes them. However, a chance encounter with a young refugee boy from Gabon changes both Marcel and the attitude of his neighbors toward him in “Le Havre.” Unbeknownst to Marcel, events in his city take on an international tone when a cargo container is opened by local authorities and it is full of “living dead” - illegal refugees from Gabon. One of their numbers, young Idrissa (Blondin Miguel), escapes the immigration police and, fortuitously, runs into Marcel. First, Marcel draws the police, led by Inspector Monet (Jean-Pierre Darrousin), away from the boy. Then, after he must admit his critically ill wife Arletty (Kati Outines) to the hospital, he takes Idrissa into his home. This act of kindness loosens up his neighbors and they are soon supplying Marcel with wine, bread and food to help take care of Idrissa. It all soon snowballs and Marcel decides that he must help the boy get to London to find his mother. This quest soon envelops the denizens of the city and Marcel, with the help of many friends, puts together a benefit concert with the popular singer, Little Bob (Roberto Piazza), headlining. The concert is a huge success and Marcel arranges for the boy’s journey. Although “Le Havre” deals with the theme of grave illness and the loss of a spouse, the film, by Aki Kaurismaki, is an upbeat little tome that leaves a good feeling to the spirit. It is a bit of fluff as character attitudes change from negative melancholia to positive and helpful without much ado. The film becomes something of a rousing crowd-pleaser with its happy and upbeat ending(s). It is good-hearted, sometimes serious, sometimes mirthful and entertaining always.