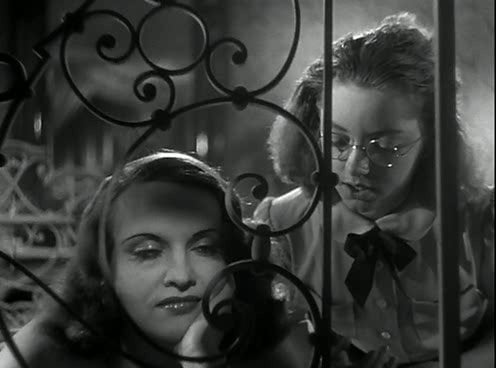 After Doctor Rémy Germain (Pierre Fresnay, "Grand Illusion") finds his nurse, Marie Corbin (Héléna Manson), reading the letter he'd written to Laura Vorzet (Micheline Francey), her married sister, he gets one of his own accusing him of crimes, signed under a pen name. But soon everyone in this French town has something to fear from the one in their midst who hides behind the identity of the raven, "Le Corbeau."

Clouzot's second film, "Le Corbeau," was based on a true poison pen letter incident in France during the 20's, but his adaptation can easily be read as an indictment of informers during WWII, just as his "Quai des Orfevres" could be seen as a condemnation of Nazi collaborators ("Le Corbeau" is on Shosanna Dreyfus's theater marquee when she first meets her Nazi admirer, Fredrick Zoller in "Inglourious Basterds"). In Clouzot's adaptation, he gives us just enough information about the central doctor to assume his guilt, but is he really guilty of everything of which he is accused? As The Raven's charges and insinuations spiral outward from Germain, infighting begins as neighbor suspects neighbor and the town which is pictured as a fairy tale ideal turns grim. Clouzot, who spent time in Berlin and was, like Hitchcock, influenced by the German expressionistic style of F. W. Murnau and Fritz Lang, and his stunning black and white imagery (cinematography by Nicolas Hayer "L'âge d'or," "Le Doulos") and sharp use of sound polish tone, point fingers and provide clues. The bell-like music that accompanies the establishing shots of the idyllic town is cut short by the rusty shriek of iron gates opening from a window as the doctor, delivering a child, must report to the gathered crones that only the mother survived. Wimpled women in black cloaks viewed hurrying down narrow streets suggest the notorious pen name. In watching Clouzot's films, certain themes begin to crop up. He's a master at third act twists and, as dark as his films often are, there's always humor, usually of the black variety (medical humor here is deliciously sick, especially for 1947). Clouzot has a predilection for love triangles complicated by crime, with one woman brassy, the other classy, one blonde, the other brunette (see also "Quai des Orfevres" and "Diabolique"). Older men often provide a type of running commentary, here in the form of Michel Vorzet (Pierre Larquey, "Diabolique"), the husband of Germain's lover. "Le Corbeau" is a terrific film on many levels. Clouzot was an auteur capable of wrapping smart observations on the human condition in richly entertaining packages.