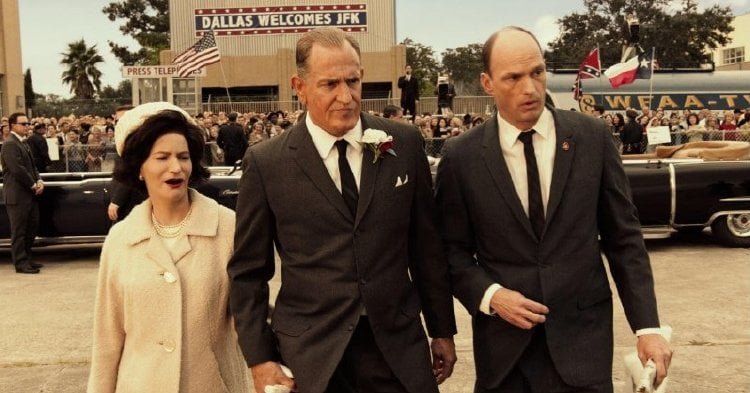 Lyndon Baines Johnson (Woody Harrelson) was vice president of the United States until that fateful November day in 1963 when he was thrust into the presidency. Keynote to JFK’s (Jeffrey Donovan) legacy, the Civil Rights Bill, became Johnson’s own mission to honor his predecessor in “LBJ.”.

Texan democratic Senate House Leader Lyndon B. Johnson (Woody Harrelson) had long had his eye on the presidency, but when the good looking junior senator from Massachusetts entered the race he was rightfully worried. After losing the primary, Johnson was surprised to get a visit from JFK, offering the vice presidency in a bid for southern votes. Only after assuming his new duties did it occur to him that he was being hobbled for a 1968 run by Robert F. Kennedy (Michael Stahl-David, "Cloverfield"). The events of 11/2/63 shook him to his core, but now that he had the office, he worried about public response to "LBJ." Director Rob Reiner ("When Harry Met Sally," "The Magic of Belle Isle") dismisses his long held Vietnam War distaste for our 36th president to instead shine a light on the man's notable domestic achievements and desire for public love. Joey Hartstone's screenplay dismisses Vietnam with one brief exchange with Secretary of Defense Robert McNamara and an end credit title. But Reiner hasn't made a good film since the 90's and while "LBJ" isn't bad, it is flawed, Johnson's changing views on civil rights unexplained except for his need to win over the public and an anecdote about his black cook (it has been surmised Johnson's political ambition trumped his personal views when voting as a southern senator). Harrelson disappears and reappears in the title role, hamstrung by an immovable neck prosthetic, but an almost unrecognizable Jennifer Jason Leigh wows as the loving, supportive Lady Bird. Also strong is Richard Jenkins as Georgian Senator Richard Russell, Johnson's former mentor thrilled to have a southerner in the White House, only to be shocked by LBJ's agenda. Grade:

Rob Reiner directs freshman screenwriter Joey Hartman’s interpretation of the pivotal event in American history – the passage of the Civil Rights Act in 1965. The film begins with JFK and Jackie’s arrival at Love Field in Dallas with Lyndon and entourage following behind. The atmosphere is electric with the arrival of the country’s first couple, but tragedy, we all know, looms. Flash back to before the 1960 election and Johnson is waffling about whether or not to declare his candidacy for president, opposing Kennedy. But, the JFK juggernaut plows through the Democratic National Convention and he readily wins the nomination. Then, Kennedy, against the advice of his brother, Bobbie (Michael Stahl-David), offers LBJ the vice-presidency. Johnson, against the advice of his closest advisors, accepts the offer. Told that the role of VP is virtually powerless, Johnson replies, “Power is where power goes.” “LBJ” follows the pattern of “current” time – the day of the assassination and the fight for the Civil Rights Bill – and flashbacks to show the man, LBJ, his public bluster and private insecurities. The filmmakers hit the right LBJ notes – like his famous habit of using the bathroom with door open and advisors outside – and delves into the feud that Johnson had, from the start, even before the election, with RFK. Woody Harrelson, in heavy LBJ makeup that works from a distance but is too inanimate in close-up (those LBJ jowls and baggy eyes), does a decent job as the man in conflict, personal and public. His relationship with Lady Bird (Jennifer Jason Leigh) helps to show Johnson in three-dimensions as a man both strong and vulnerable. Leigh, with a subtle performance, is superb as the steadfast First Lady. The supporting cast is first rate and a Hollywood list of veteran character actors – Richard Jenkins as powerful Republican Senator Richard Russell gets the best moments with LBJ - and all make their real life characters believable – a good thing since they are real life people. The filmmakers pay close attention to period details – the reenactment of the assassination is spot-on realistic in look and feel – and the production captures the time. “LBJ” is a good, not great, depiction of the man and the moment.