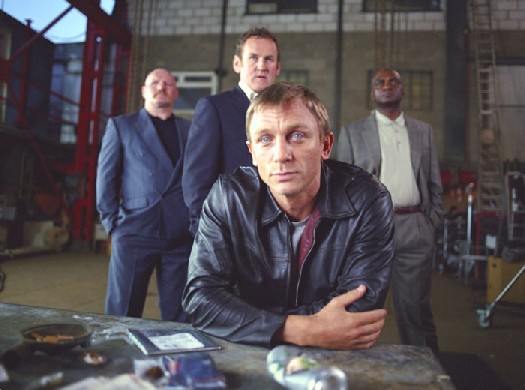 An unnamed London professional (Daniel Craig, "The Mother," "Sylvia") explains that he is not a gangster, just a businessman whose commodity happens to be cocaine. The man is smart, refusing to deal with people who draw attention to themselves. With a real estate letting agency as a front, he has amassed a tidy sum and is planning to get out of the game, but a luncheon invitation changes everything and he finds out his world is like a "Layer Cake."

Flashy British crime director Guy Ritchie's producer Matthew Vaughn ("Lock, Stock and Two Smoking Barrels," "Snatch") makes his directorial debut in the same genre but with his own distinctive style. With Daniel Craig channeling Steve McQueen as if he had a sense of humor at the heart of his extended ensemble cast, Vaughn's film is slightly cheeky, not completely taking itself seriously even though the action is dense and often gruesome. The film begins with a bit of jokey sleight of hand. Our man struts through a brightly lit pharmacy, lined with elegantly packaged products bearing the logo 'fcuk Reality cocaine.' Craig's narration fills us in on how he operates below the radar and how 'drugs changed everything' as a wipe effect turns the shelves back to their normal occupants. He's suspicious when his higher up Gene (Colm Meany, "Intermission") conveys Jimmy Price's (Kenneth Cranham, "Chocolat") lunch invite. The amusingly foul-mouthed Price makes an odd request, asking XXXX (as Craig's character is noted in the press notes and script) to locate the drug-addicted daughter of a powerful friend of his, Eddie Temple (Michael Gambon, "The Life Aquatic with Steve Zissou"), then casually notes another bit of business to be arranged by Gene. The second request becomes more immediately dangerous, as it involves dealing with Duke (Jamie Foreman, "I'll Sleep When I'm Dead"), the flashy, loud type XXXX has successfully avoided, but all the twisty turns this sale of one million stolen Ecstasy pills takes ultimately brings him to the same end as the first request - up against someone far bigger than Jimmy. Writer J.J. Connolly, adapting his first novel, is adept at the art of double and criss crossing double crossers. Let your attention stray for a minute and you could have major trouble jumping back on this bus. Even so, Vaughn keeps the action breezing by and keeps the story line clear even as he jumps back and forth from different locations and time periods. Vaughn's visual style is far less aggressive than Ritchie's, seeming more grounded in the slower psychedelia of the 60's. He occasionally employs pans to move from one scene to another and director of photography Ben Davis uses some extreme angles for intriguing point of view shots. The old under-the-glass-coffee-table trick allows the actors to add subtle comedy in the scene where XXXX is introduced to the art of the gun. Original music by Ilan Eshkeri ("Black Hawk Down") and Lisa Gerrard ("Gladiator") is inventive, with XXXX's first hit accompanied by music that sounds like "The Silence of the Lambs" score gone techno. Soundtrack selections are also spot on and well placed from The Cult's hard-driving "She Sells Sanctuary" to Duran Duran's "Ordinary World" and the Stones' "Gimme Shelter." The huge cast are all good and Craig's more than up to anchoring them. "Layer Cake" may prove to be his breakout film. The always reliable Colm Meany doesn't disappoint here, shifting from chilly threat to hilarity in a heartbeat. George Harris ("Raiders of the Lost Arc") is all back room business as XXXX's partner Monty until he erupts with unexpected viciousness. The three actors play off each other with the humor and trust of years. Kenneth Cranham makes Jimmy a privileged vulgarian (delivering lines like 'the grub here will make your bullocks tingle' with panache) while the great Gambon is smooth as silk. Foreman is a strutting thug, ideally matched with Sally Hawkins ("Vera Drake") as his over-her-head tough and slutty sidekick Slasher. Duke's nephew Sidney is played with just the right level of ineptitude by Ben Whishaw ("Enduring Love") and up and comer Sienna Miller ("Alfie") lays on the heat as his club bunny. "Layer Cake" seems to wrap with a bit of a cliched letdown, but just wait - one last surprise lies in its icing. Chalk up another auspicious directorial debut for 2005 and a terrific star vehicle for Craig.

The Man (Daniel Craig, billed as XXXX) is an up-and-comer in the UK drug underworld but wants out before it is too late. However, his boss, Jimmy Price (Kenneth Cranham), has other plans and gives him two tasks to accomplish before the Man is set free. But, getting out does not prove all that easy in “Layer Cake.” The title of the film comes from a soliloquy delivered by gang kingpin Eddie Temple (Michael Gambon) equating the layers of a cake to the layers of organization in the drug underworld’s criminal hierarchy. For the Man, these layers seem to be pretty rigidly set when Jimmy orders him on two missions. One is to find Eddie’s missing junkie daughter, Charlie (Natalie Lunghi). The other task is to broker a deal with a loose cannon petty crook, The Duke (Jamie Foreman), to buy and sell one million tablets of ecstasy. Neither task will prove to be simple or easy as the Man must deal with intrigues on many levels. For one thing, his insight into the machinations and hierarchy of his chosen business prove incorrect from the start and Jimmy Price is not the all-powerful gang leader that he appears to be. And, the Duke! He and his equally psycho girlfriend, Slasher (Sally Hawkins), heisted the huge ecstasy shipment from a mysterious (and deadly) Serb drug lord. Slavo (Marcel Iures) wants his drugs back, got wind of the Man’s involvement and places the blame for the robbery on him. Just when he thought he was getting out the Man is dragged back in. The complex weaving of J.J. Connolly’s multi-layered story, adapted from the author’s novel, has few false turns as the Man must deal with all the layers of this crooked cake. Daniel Craig has the tough guy good looks and confident persona to hold center stage opposite a huge, talented supporting cast. The soft-spoken, play-by-the-rules Man isn’t prepared for the deceptions and double-crosses he must face from above and below and he struggles to make sense of it all. An, come out alive. Michael Gambon as the underworld don gives a poised, ruthless performance. Eddie Temple is in control of the situation at every level and will brook no disrespect or betrayal and Gambon does it perfectly. Jamie Foreman gives a buffoonish but dangerous perf as a low level thug who thinks that the million tabs of heisted ecstasy is his key to the lap of luxury. Out of touch with reality, the Duke is the bane of the Man’s existence. The rest of the large ensemble cast fills all the niches we expect in Brit gangster films. First time director Matthew Vaughn cut his producer’s teeth with Guy Ritchie’s “Lock, Stock and Two Smoking Barrels” and “Snatch,” takes on helming duties with his spiffy crime drama, “Layer Cake” and does a fine job of it. The vast cast and intricate, well-told story are handled with skill by Vaughn and the behind the camera crew. The only exception is a distracting romance between the Man and Tammy (Sienna Miller), the girlfriend of the Duke’s unsteady cousin, which takes you away from the action. It also screws up the tight frenetic pace that otherwise prevails through the film. Techs are solid with lots of interesting camera work by Ben Davis and some awesome editing transitions performed by Jon Harris. Locations range from Britain to Amsterdam and the production design moves from seamy to elegant, showing the environments of the different layers of the gangland cake. Layer Cake” is a solid entry into the British gangster film genre. It aspires to the same lofty heights as the classic “The Long Good Friday” and doesn’t quite hit the mark. It will be interesting to see what Matthew Vaughn’s follow up effort will be.