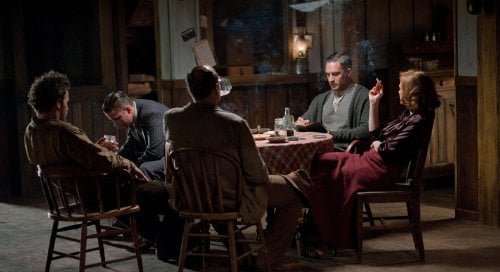 As kids, the level of violence each could stomach was already well established in the three Bondurant brothers of Franklin County, Virginia, but life doled out trials which further shaped them. By 1931, middle brother Forrest (Tom Hardy, "The Dark Knight Rises") was already legendary as being invincible, having survived the Spanish flu which took their parents. Having assumed head of family, running their business at Blackwater Station, a thriving front for their unparalleled moonshine business, Forest will be challenged by the impetuous ambition of younger brother Jack (Shia LaBeouf, "Transformers") and the corrupt Special Deputy Charlie Rakes (Guy Pearce, "Animal Kingdom," "Prometheus") who is repulsed by these "Lawless."

Australian director John Hillcoat ("The Road") reteams with most of his team from his Australian revenge Western, "The Proposition," to create one of the most impressive American period pieces of a specific time and place since "Bonnie and Clyde." Screenwriter Nick Cave ("The Proposition") adapts Matt Bondurant's book, "The Wettest County in the World," in which he took family lore and fleshed out men he barely knew, including grandfather Jack, for an American tale of rebellion, independence and industry which just happened to be against the law at the time. With his animalistic grunts, low key approach and later, stitched neckline, Tom Hardy plays Forest like Frankenstein, well meaning and protective but also dangerous and pretty indestructible, and he's got a great adversary in Pearce's fussy dandy of a villain, all pomaded 1/2" part, shaved eyebrows, gray kidskin gloves and persnickety manner. The weak link is the main character - Shia LaBeouf gets the ball-less cockiness of his role down pat, but the wide-eyed facial expression he wears most of the time still reads 'Oh My God, there's a giant robot!' Good thing costume designer Margot Wilson ("The Proposition," "The Road") is around to make him look his part. She does incredible work here, dressing everyone in clothes which are not only appropriate to their time and place, but look manufactured then, too. Jack goes from the hand-me-down pants cinched up at the waist we see him wear as a kid to the homespun duds of adulthood and the fancier threads that come with money. As the women of the piece, Jessica Chastain ("The Help") and Mia Wasikowska ("Jane Eyre") are a study in opposites. Chastain's Maggie is trying to escape the crime and corruption of Chicago (the same thing Jack is running towards) and arrives in city finery which gradually becomes toned down while Bertha, whose father is a pastor of the local Dunkard Brethern plain people, spends most of the film in simple muslim and a bonnet until Jack buys her a rosebud splattered yellow dress. If "Bonnie and Clyde" had been made in their time, Jack would have been a fan. He worships at the altar of celebrity gangsters, none more than Floyd Banner (Gary Oldman, "The Dark Knight Rises"), whom he witnesses shooting up a car with a tommy gun one day (one of the film's more restrained scenes of violence), while out with his buddy Cricket Pate (Dane DeHaan, "Chronicle"). Jack's the hustler, Cricket the genius savant who invents new, more elaborately hidden stills and figures out how to juice a carburetor. With Forest having rejected his local pol's payoff demands, going against the tide of the entire county, he becomes a target of the Chicago boys, who come after him (and, as a result Maggie) in a brutal way. He survives, another legendary story born, but while he's recovering Jack takes it into his own hands to cut a deal with Banner and almost gets himself and Cricket killed in the process. But Banner's a 'good' bad guy and passes back a tip to Forest, one that ends in one of the bloodiest and most brutal retaliations by two of the three Bondurants, Jack having arrived too late, only deemed man enough to deliver the body parts lacking himself as a horrific warning to Rakes. Not having learned his lesson after his close call with Banner's boys, Jack's braggadocio put him and those he cares about right back into Rakes's sights. LaBeouf's bull in the china shop performance excepted, the ensemble cast is excellent. In his second major role Dane DeHaan is so compelling and so utterly different a character from his "Chronice" psycho it's difficult to place him. As the least showy brother, Jason Clarke ("Trust," "Texas Killing Fields") makes his Howard a damaged enforcer and balance between his two younger brothers. Bill Camp ("Compliance") shows the complexity of a long time Sheriff having to negotiate between blind-eyed criminal citizenry and hostile outsiders. Pearce just transforms himself into the mincing but brutal lawmaker ('I don't drink from a greasy cup' he advises Maggie, the disdain dripping from his lips) who erupts most spectacularly when labelled a 'nance.' Everything in his performance can be boiled down to the way he regards blood on his gloves. The production (Designed by Chris Kennedy, "The Proposition," "The Road"), in addition to the hair/makeup/costume is terrific, dropping us right into the hills of prohibition Virginia. Cinematographer Benoit Delhomme ("The Proposition") crossed over to digital with Hillcoat and achieves a dusty autumnal look while editor Dylan Tichenor fashions montages which push the celebrity gangster subtext. The score by Nick Cave and Warren Ellis ("The Proposition") juxtaposes jaunty hillbilly sounds with ominous mood while anachronistic songs like the Velvet Underground's 'White Light, White Heat’ are 'aged' using regionally appropriate interpretations. Best of all, "Lawless" ends well by pushing Forest's legend to irony and back again.

Good actors (heck one is even an Oscar winner), a competent action director with F. Gary Gray and slick production values are not enough to overcome a bad, even dumb, script by Kurt Wimmer. Timeframes jump over a ten-year period but it is all a jumble as Clyde exacts revenge on those he deems responsible for his loss and injustice. There are an imaginative series of well-planned, and sometimes gruesome, assassinations but the story tying these killings together is a head shaker. The fine cast, besides Foxx and Butler, includes Colm Meaney, Bruce McGill, Leslie Bibb and Regina Hall, though none has any material to grab on to and run with. The characters are universally 2D, including the stars, making this a film that only goes through its routine paces, thinking that twists in plot will overcome the mediocrity of the script. It does not. “Law Abiding Citizen” is the kind of ragged film that appeals to the lower common denominator rather than the intelligent portion of the viewer’s brain. It will garner curiosity from the action fans with its copious action and imaginative vengeance-is-mine killings but will be an insult to the discerning moviegoer.