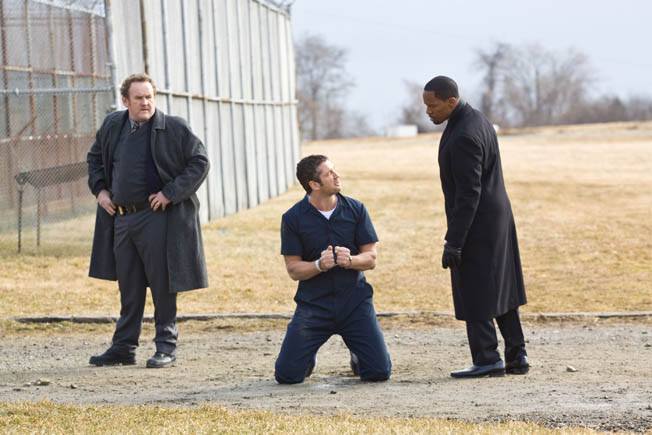 Clyde Shelton (Gerard Butler) lost his wife and daughter when they were brutally murdered during a home invasion ten years before. One of the killers plea-bargained his way out of lethal injection and his finished his truncated murder sentence. The brilliant inventor has bided his time to exact revenge on the murderers and those responsible for not exacting the maximum penalty, including assistant DA Nick Rice (Jamie Foxx) who is more concerned with near spotless conviction rate instead of getting justice for a “Law Abiding Citizen.”

Inventor Clyde Shelton (Gerard Butler, "The Ugly Truth") answers the door of his Philadelphia row house one evening and is overwhelmed by two home invaders with a baseball bat to the face. When he comes to, he his bound and gagged and watches as one of the men, Clarence Darby (Christian Stolte, "The Lucky Ones," "Public Enemies"), stabs his wife, then takes his little girl out of sight. Clyde survives, only to see Assistant D.A. Nick Rice (Jamie Foxx, "Ray," "The Soloist") make a deal with Darby in order to get his partner, Ames (Josh Stewart, "The Curious Case of Benjamin Button," "The Collector"), the death sentence. Years later, with Darby back on the street, Clyde challenges the entire Philadelphia Justice system as a “Law Abiding Citizen.” Screenwriter Kurt Wimmer’s last two efforts ("The Recruit," "Street Kings") weren’t exactly exercises in reality, but his latest is downright ludicrous. Director F. Gary Gray ("The Italian Job," "Be Cool") seems to have picked up on some “Seven”-like aspects of the script to arrive at the film’s visual look, but the effect it produces is more like “Saw V” crossed with every clichéd film about a detective’s last day on the job and a workaholic coming to appreciate his family. As the über-vigilante, Butler uses the same odd mouth-twisting exercise to achieve an American accent in “The Ugly Truth,” and the result is just as distracting as it was in that (superior!) film. The film has barely begun when we begin to question its logic. Two home invaders, ostensibly out for robbery, seem more intent on subduing their victims than actually stealing anything – we never see them aim for anything beyond the foyer mantelpiece. And of course, since it is clearly Darby who is the psychopath of the duo (Ames wants only to leave and objects to Darby’s assaults on the victims), he would be the one Rice would cut a deal with. We’re informed it is ‘Ten Years Later’ during a match shot which switches Rice’s newborn baby girl into a ten-year-old (Emerald-Angel Young) making French toast, the better to connect directly with Shelton’s loss a decade prior. But Shelton has a master plan (thank god, because the filmmakers fail to make sense of it) beginning with the gruesome torture-death of Darby, which he also videotapes. But Shelton will not stop until he gets the entire justice system to change, and so he disrupts the lethal injection execution of Ames to ensure an eye-popping demise (why torture this guy?), lands himself in jail to taunt Rice with stunts such as demanding lunch be delivered from a top notch steak joint by a specific time before he’ll provide the whereabouts of his next target, Darby and Ames’s lawyer. Shelton keeps working his way up the ladder until he has all of City Hall in his sites. It’s clear that Wimmer has attempted to substitute “Seven’s” deadly sins with random levels of injustice here. Gray apes shots from many other films, from the central prison cage of “Silence of the Lambs” to the overhead look at the sunny field of a power grid or the submission of a prisoner between two partners (both “Seven”). “Lambs” will also come to mind with the ‘crucifixion’ of Ames within his death chamber, but “Law Abiding Citizen” just comes across as sleezy, sloppy seconds of these and other films. Neither Butler nor Foxx ever engender any sympathy, although one might feel briefly for Leslie Bibb’s ("Iron Man," TV's "Kings") Sarah. In addition to Butler and the Oscar-winning Foxx, it is astonishing to note that this junk also attracted the Oscar-nominated Viola Davis (“Doubt”) in a small role as the mayor, Bruce McGill ("The Legend of Bagger Vance," "W.”) as the D.A., Colm Meaney (“The Damned United”) as Detective Dunnigan and “24’s” deliciously evil President Logan (Gregory Itzin) as the prison warden. Character actress Annie Corley (“Monster,” “The Lucky Ones”) is the only one who might expect a career bump from this dreck as she impresses as humorously dry Judge Laura Burch. About the only thing going for “Law Abiding Citizen” is an entry into the cheese-stakes (fitting it being set in Philadelphia), of the ‘so-bad-it’s-entertaining’ variety. After some gruesome deaths and popcorn-crunching explosions, rest-assured daddy finally gets to that cello recital.

Good actors (heck one is even an Oscar winner), a competent action director with F. Gary Gray and slick production values are not enough to overcome a bad, even dumb, script by Kurt Wimmer. Timeframes jump over a ten-year period but it is all a jumble as Clyde exacts revenge on those he deems responsible for his loss and injustice. There are an imaginative series of well-planned, and sometimes gruesome, assassinations but the story tying these killings together is a head shaker. The fine cast, besides Foxx and Butler, includes Colm Meaney, Bruce McGill, Leslie Bibb and Regina Hall, though none has any material to grab on to and run with. The characters are universally 2D, including the stars, making this a film that only goes through its routine paces, thinking that twists in plot will overcome the mediocrity of the script. It does not. “Law Abiding Citizen” is the kind of ragged film that appeals to the lower common denominator rather than the intelligent portion of the viewer’s brain. It will garner curiosity from the action fans with its copious action and imaginative vengeance-is-mine killings but will be an insult to the discerning moviegoer.