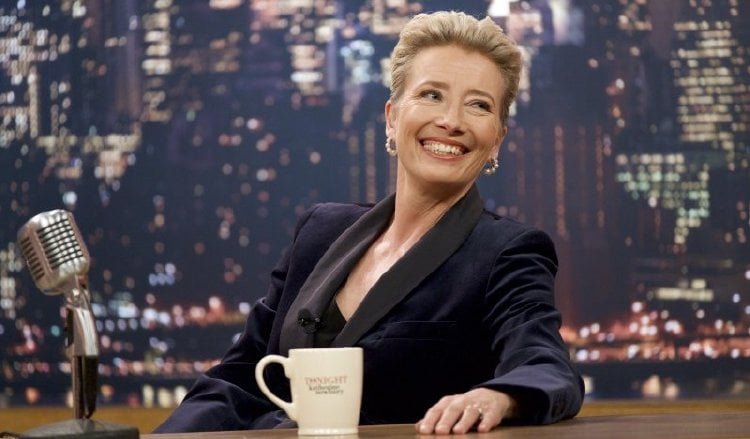 For 26 years Katherine Newbury (Emma Thompson) has been the reigning evening talk show host. She thinks she’s powerful enough to ignore new network head Caroline Morton (Amy Ryan) so is shocked to learn her 43 Emmys do not eradicate ten years of declining ratings and that Morton plans on replacing her. Katherine, a misanthrope who doesn’t even know the names of her writing staff, believes she’s held onto her principles, but it will take a new writer hired to address diversity issues, Molly Patel (Mindy Kaling), to shock Katherine into realizing she hasn’t been true to herself on “Late Night.”

Using her own experience as an intern with Conan O’Brian, writer/star Mindy Kaling (TV’s ‘The Office,’ ‘The Mindy Project’) has fashioned a multi-layered look at how even excellence can be waylaid by complacency and the assumption of intellectual superiority. Kaling wrote for lead Emma Thompson, who herself began in stand-up and a television sketch show, and the actress walks a tricky line, creating an entertaining public facade, a boss-from-hell workplace persona and a thoroughly sympathetic private character. But while “Late Night” is well crafted all around, it isn’t particularly funny nor a work of ground breaking originality. We first meet Katherine being asked for a raise by a writer with a growing family. When she cuts him off at the knees, citing the ‘family man’ cliché as the very reason women have been historically kept down in the workplace, he counterattacks, noting that she doesn’t employ a single woman. He’s fired, executive producer Brad (Denis O’Hare) tasked with hiring a female writer. That would be Molly, whose background as a QA manager at a chemical plant with no television or comedy experience perplexes Brad to no end. Turns out, she’s been pretty resourceful, using a winning workplace essay contest to meet the corporate CEO of the company that owns both her plant and ‘Tonight with Katherine Newbury’s’ network. She idolizes Newbury and is trying to break in to stand up by hosting a charity cancer event. She’s hired, but will be the victim of Katherine’s ‘Apprentice’-like propensity for firing more than once before her worth is finally recognized. Kaling covers a lot of ground from sexism and nepotism to the best method to break into your dream job, something her character discovers by starting off on the wrong foot. Her Molly’s dedication begins to win over her male coworkers, older officemate Burditt (Max Casella, “Blue Jasmine”) responding to her cutting self criticism, her fresh ideas spurring Mancuso (Paul Walter Hauser, “I, Tonya”) to request collaboration. Head writer Tom Campbell (Reid Scott, HBO’s ‘Veep’) is a tougher nut to crack, desperate to maintain his pecking order and resentful of her good fortune. Charlie Fain’s (Hugh Dancy) early acceptance flatters Molly, who fails to see the warning signs we learn were also ignored by someone who should have known a lot better. But while much of “Late Night” is viewed from Molly’s perspective, it is Newbury whose parallel path to self discovery that is the film’s main focus. Katherine blames the writing staff she barely knows for her problems, unconvinced that her booking choices of Diane Feinstein and Doris Kearns Goodwin could possibly cause a ratings sag. Her initial attempts to shake things up are disastrous, a YouTube star (Annaleigh Ashford, Showtime’s ‘Masters of Sex’) calling out blatant condescension by storming off with a ‘You need me more than I need you,’ a pulled segment which goes viral from a fan video. When Molly refuses to stay late on the evening of her charity event, getting fired once again, Katherine ponders upon something that’s been said, showing up to take the stage and try out new material. From that point, Molly’s astute guidance to connect with the common man while still drawing upon Katherine’s strengths result in such popular recurring bits as her White Savior and some searing consumer advocacy. Best of all is Katherine’s flipping of the script when she hosts Daniel Tennant (Ike Barinholtz), her intended replacement. The film also becomes poignant as it reveals Katherine’s personal life, her marriage to the older Walter Laval (John Lithgow), now suffering from Parkinson’s disease, a refuge rocked by scandalous blowback to her onscreen maneuverings. Lithgow is the film’s retiring voice of reason, a blackly humorous sounding board for his wife, a benevolent advisor to Molly. Director Nisha Ganatra (“Chutney Popcorn”), who’s largely been working in television, clicks all these moving pieces neatly into place, that place the New York City of Rockefeller Center studios, shabby stand up clubs, elegant townhouses and Brooklyn walk ups. Kaling’s created a sweet and human story of starting out and reinventing oneself, one just wishes, like Molly’s first ‘joke,’ that it were a wee bit funnier. Her Molly isn’t that far afield from Rachel MacAdams’ morning TV producer in “Morning Glory,” a young woman getting a shot with an experienced veteran set in his ways. Grade: