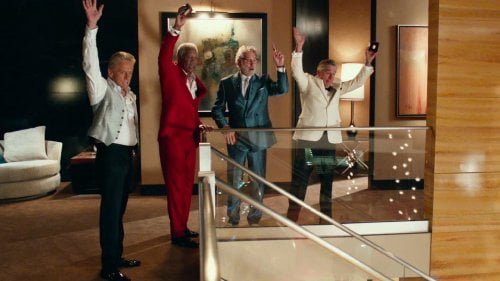 58 years ago 'The Flatbush Four' ruled their neighborhood roost. Now womanizer Billy (Michael Douglas) is a hot shot Malibu lawyer about to marry Lisa (Bre Blair), a woman half his age, as his three cohorts are declining into old age in other parts of the country. Sam's (Kevin Kline) bucking against Florida retirement and since he's had a minor stroke, Archie (Morgan Freeman) is being over-protected by his son, Ezra (Michael Ealy, "Think Like a Man"). Still in Brooklyn, Paddy's (Robert De Niro) been mourning his wife for over a year, but is tricked nonetheless by Sam and Archie into heading to Sin City where the foursome can indulge in a bachelor party that will be their "Last Vegas."

When I first saw the stand-up for "Last Vegas" in a local movie theater, I groaned. Just what we need, another comedy mined from old people not acting their age with intimations of "The Hangover" type hijinx to boot. What a refreshing surprise, then, to find that while formulaic, certainly, "Last Vegas" writer Dan Fogelman ("The Guilt Trip") and director Jon Turteltaub ("While You Were Sleeping," "National Treasure") have based their comedy on character rather than hoary cliches. That each of these men will leave their destination changed for the better goes without saying, but how they get there is pretty entertaining. The biggest obstacle to overcome is the recent bad blood between Paddy and Billy, once best friends who vied for the same girl. Tricked by Sam and Archie into the Vegas trip, Paddy's ready to turn tail when he spies Billy, but the old curmudgeon decides to stick around once he's laid eyes on sultry lounge singer Diana (Mary Steenburgen). Meanwhile Archie's BlackJack prowess lands them in high stake heaven, all the better to fund the weekend of a lifetime. Fogelman's created a tidy inverse then-and-now parallel for Billy and Paddy while Sam and Archie are the comic sidekicks. Kline, whose back story doesn't really make sense (his hot ticket wife Miriam (Joanna Gleason, "Crimes and Misdemeanors") gives him a condom and Viagra hall pass, so why's his retirement so boring?), is a real kick as a kid let out in a candy store. His motivation may be underwritten but he's got a bevy of bon mots to loft and Kline really brings the funny. Freeman's more physical, selling visual gags, Red Bull Vodka buzz and slick dance moves. Trim, tanned and lion-maned, Douglas is a slickster with a hidden heart. De Niro growls, grumbles and in one case, punches, but a hard learned truth gives the actor Paddy's pivotal reawakening and it's just this side of touching. As the 'empty' lounge singer, Steenburgen is a wise but light-hearted woman who knows what she wants. As the film's catalyst, she sparks. In lesser roles Romany Malco ("Think Like a Man") undergoes his own turnaround as the Vegas VIP host peeved to have lost the 50 Cent (who cameos) perks for four old guys. In a similar but less successful vein, Jerry Ferrara ('Entourage's' Turtle) is a punk who's duped into thinking he's tussled with the mob. Roger Bart (TV's 'Desperate Housewives,' 'Revenge') represents Vegas fringe as a transvestite Madonna impersonator hit on by Sam while April Billingsley becomes the more viable target of Sam's attention. Production Designer David J. Bomba shows Vegas in a fresh light, setting scenes in the ARIA and airport. Steenburgen and Douglas walk through the neon sign museum, an inventive way to acknowledge the past, before daring a ride on the Stratosphere's X-Scream, a 'plunge' into the future. Costume does the same, taking the four male Oscar winners from the varying states of their present into showier, updated duds for the big bash. "Last Vegas" wraps with a coda that harkens back to each character's introduction, Fogelman having set his pins neatly in a row, ready to be knocked down. The film might be formula, but the folks behind it weren't indulging in a crap shoot.