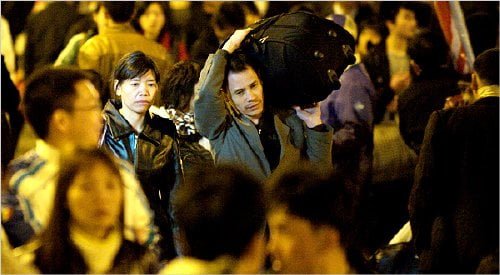 On the eve of the Chinese New Year, 130 million people across China form the world’s largest migration in history. Workers in distant parts of the land head across country to spend just a few days with their families, flooding the already overtaxed rail system as all just want to get the “Last Train Home.”

In China, 130 million migrant workers all try to travel home for the same holiday - New Year's - at the same time. It is the largest human migration on the planet and fraught with great hardship. Director/editor Lixin Fan follows the Zhang family for two years and uncovers ironic tragedy in "Last Train Home." Fan starts with the middle generation - Suqin and her husband Changhua - beginning to worry about being able to get tickets. The sad state of affairs is that they are so tied to their sewing machines doing piecework for umpteen hours a day, they have no time to get tickets to leave their all-work-no-play existence. (When Fan shows them turning in for the night, their 'accommodations' are so stark and have such little privacy that I at first thought they were in a train depot washing up.) 'If a family can't spend New Year's together, life is pointless' Suqin notes. A sad state of affairs. They are greeted by a *sea* of people, all being told via loudspeaders not to even line up as tickets are sold out. Police keep the multitudes at bay using barricades and bullhorns. People struggle with luggage and exhaustion. Somehow, Changhua manages to get tickets, although he pays dearly for them. Home is a rural farm two thousand kilometers away and the contrast is sharp, all verdant, lush green compared to the polluted city left behind. But life is poor here and Grandma, who takes care of her daughter's children, describes how she never had the opportunity to leave the farm. The children, teenaged Qin and younger brother Yang, don't look as happy to see their parents as their parents are to see them. Conversation mostly consists of lectures on studying and grades to better the children's life. Things do not go well for the Zhang family. A bad decision is made that forces a heartbreaking one. This is a lifestyle most Westerners could not begin to imagine and Fan's documentary is illuminating, insightful and sad.

Think of the entire population of Mid-West USA packing their bags and trekking to the East or West Coast for one week a year. That is the magnitude of the annual Chinese migration from the factories to the towns and villages across the land. These workers toil seven days a week for the entire year just waiting for those few days to be with family. Tyro documentary filmmaker Lixin Fan follows a husband, wife and daughter as they prepare for their journey home. Things, though, are not straightforward for Changhua, Yang and daughter Qin – or anyone else taking the train home. Tickets are at a premium and everyone is vying for them, making the guarantee of a ride an iffy proposition. Assuming they can get tickets (which the tiny family does, for a price) and have all of their belongings in tow, they also have to contend with Mother Nature. An ice storm down the line has thrown the delicate travel plans for millions into disarray and tensions build. Police and Army troops are called in to maintain order and the crowd begins to become a mob. Lixin Fan evokes sympathy for the plight of the factory peasants toiling their lives away in what has become the world’s new super power – China. “Last Train Home” also makes me appreciate the freedoms that we have in our own yard. I used to hate traveling and all the hassles it entails but after watching the arduous plight of so many millions who just want to go home to be with family, I feel as if I walked a mile in their shoes.