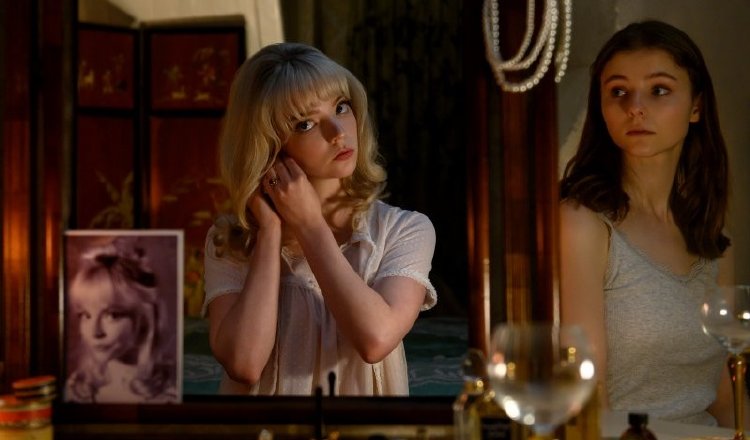 With dreams of becoming a fashion designer, Eloise (Tomasin McKenzie) moves from Cornwall to London, ditching her student accommodations for an old fashioned rental.  There her enthusiasm for all things 1960’s turns into a strange reality when she shares the experiences of ‘the next Cilla Black, Sandie (Anya Taylor-Joy), a singer at the trendy Café De Paris “Last Night in Soho.”

Cowriter (with Krysty Wilson-Cairns, TV's 'Penny Dreadful')/director Edgar Wright’s ("The Sparks Brothers") elaborate homage to London’s Swinging Sixties features two hot young actresses, glorious production design and costuming, a cooler than cool soundtrack and three of the UK’s most legendary actors of the time, all in service to a retro horror shocker that would have constituted B Movie programming in its day.  It’s a goof, a lark, enjoyable trash with a high production pedigree that puts a new twist on the unreliable narrator.

Ellie’s been brought up on 60’s pop by her loving grandmother Peggy (Rita Tushingham, looking fab at 79) and her bedroom décor tells us she’s become enamored of the decade.  She is also haunted by the loss of her mother, a woman who tried to head to London before her but who took her own life due to mental illness, but whose smiling face often appears behind Ellie’s when she looks into a mirror.  Peggy tries to warn her granddaughter than London can be dangerous, but the young girl heads off full of optimistic confidence.

That’s quickly shattered when a creepy older cab driver threatens to stalk her, then her dorm roommate, Jocasta (Synnove Karlsen), turns out to be a competitive, snarky mean girl.  After spending her first night sleeping in a common room, Ellie leases a bedsit from the elderly Ms. Collins (Diana Rigg), an old fashioned room with lots of character in the West End.  Thrilled with her new digs, Ellie drifts off, only to walk right into the nightclub where the alluring Sandie is trying to launch her singing dream years and years ago.

Inspired, Ellie impresses Ms. Tobin (Elizabeth Berrington, "In Bruges") as she recreates Sandie’s pink chiffon shift in the school atelier.  She also draws the attention of John (Michael Ajao, “Attack the Block”), a nice young man who recognizes both her specialness and her vulnerability.  It’s a good thing he’s around, because as Ellie follows Sandie’s exploits every night, things take darker and darker turns, the man, Jack (Matt Smith), who’d seemed to be launching her singing career instead exploiting her in the worst possible ways.  Could the silver haired ladies’ man (Terrance Stamp) who follows Ellie around The Toucan, the pub where she’s gotten a job, possibly be Jack?  As the events Ellie witnesses turn murderous, her visions begin to creep into her waking hours and we are not the only ones beginning to wonder if she is losing her mind…

From that first glorious sight of a movie marquee emblazoned with ‘Thunderball,’ we know we’re in good hands with production designer Marcus Rowland ("Attack the Block") and the art directors who’ve dug up everything from silk tasseled lamp shades to vintage Triumph convertibles.  Wright’s done a phenomenal job recreating this time and place, Sandie sounding ever so hip ordering a Vespa, costume designer Odile Dicks-Mireaux ("An Education") indulging in white patent trench coats and black lace babydolls while hair and makeup go all blond bouffants and cat’s eye liner.   Director of Photography Chung-hoon Chung ("The Handmaiden") and the effects and editing teams pull off such dazzling sights as Sandie and Jack kissing right next to a mirror reflecting Ellie and Jack doing the same and both women interchangeably sharing him on the dance floor.  Speaking of dance, Taylor Joy recreates everything from a “Cabaret” inspired group number to The Frug.  Wright’s always specialized in carefully curated soundtracks, this one featuring Cilla Black, Petula Clark, and, in one present day scene, Siouxsie and the Banshees.

McKenzie is the fresh-faced alternate to Taylor Joy’s sophisticated sex kitten, both women traversing a downward arc (McKenzie scarily melts down in a library archive while Taylor Joy gets a reactive workout as one man after another tells her ‘What a lovely name’).  Ajao is a guardian angel, a good man amidst a sea of bad ones.  In a small role, Pauline McLynn is notable as Ellie’s boss at the Toucan, a blond barkeep who would be equally at home in either time period.  “Last Night in Soho” ends on a brazen note, a twist we cannot possibly see coming because, well, we’ve been fed false information, but the film’s such a retro blast you may not even notice.

Eloise Turner (Thomasin McKenzie) is a budding fashion designer who sets her sights on London and a fabulous career. She finds a charming apartment right near her school and sets out to be great. But something is different about Ellie as she enters a nightmare world “Las Night in Soho.”

Director Edgar Wright brings us into Ellie’s life as she enters the prestigious London School of Design. She meets her roommate, a pushy bully, Jocasta (Synnove Karlsen), who badgers Ellie to go bar hopping. It will be a life-changing experience when she looks into a mirror and sees, not Ellie, but pretty Sandy (Anna Taylor-Joy) and the bar as it was in the 1960s. She is drawn to the enigmatic reflection and, soon, she begins living in two worlds, the past and the present.

As the 60s intrudes more into Ellie’s life, the film takes a turn and becomes a murder mystery through time. It is a clever premise that uses subtle and impressive special effects to transport us back and forth in time with Ellie. Some may complain that the “twist” in the story is a cheap shot but, to me, it was satisfying vindication for a character gone long ago.