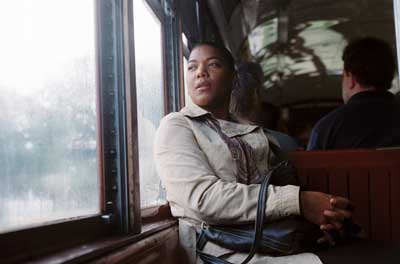 Georgia Byrd (Queen Latifah, "Bringing Down the House," "Beauty Shop") is an under appreciated sales associate at Kragen's Department Store with dreams of becoming a chef and marrying her handsome coworker Sean Matthews (LL Cool J, "S.W.A.T."). But she toils away, keeping her dreams to herself, until a bump on the head lands her in a CAT Scan machine. The results uncover the lethal damage of a rare virus and Georgia is stunned to learn she has only about three weeks to live. Without telling a soul, Georgia withdraws all her savings from her New Orleans bank and heads to the restorative spa resort of Karlovy Vary for a "Last Holiday."

Director Wayne Wang ("Maid in Manhattan") remakes the 1950 Alec Guinness original with a screenplay from the team behind the big screen adaptation of "How the Grinch Stole Christmas" with mixed success. As with his last film, "Because of Winn-Dixie," Wang is blessed with a highly charismatic star, but his films have been awkward of late, the work of a man who either is losing his skills or his control over his films. "Last Holiday" is strictly by the numbers, but, as with "Beauty Shop," the Oscar-nominated Queen Latifah has the talent to give sub-par material a likability factor. If this woman could pair herself with better material and filmmakers, she could prove formidable. Georgia is a quiet woman who sings in her Church choir and waits for Sean to notice her rather than follow coworker Rochelle's (Jane Adams, "Happiness") advice to take action. She cooks along to Emeril Lagasse's TV Show and feeds the results to a young neighbor while she eats Lean Cuisine. But death, ironically, gives her a new lease on life and no sooner has she checked into the Grandhotel Pupp than her new outspokenness plunks her into a hometown power base that includes Matthew Kragen (Timothy Hutton, "Secret Window," "Kinsey"), her former biggest of bosses, and endears her to all but one of the hotel staff, most significantly Chef Didier (Gérard Depardieu, "102 Dalmatians," "The Closet"), a man who appreciates a healthy appetite. Of course, it is highly coincidental, in a script that takes liberal advantage of coincidence, that a working girl from New Orleans would arrive at a Czech resort town at the same time as her state's Senator (Giancarlo Esposito, "Ali," "Derailed") and Congressman (Michael Nouri, "The Terminal") and charm them enough to throw the retail magnate for whom she recently worked into a competitive frenzy. They, of course, all believe she's a wealthy mover and shaker seeing as how she's ensconced in the $4,000/night Presidential Suite and Kragen is afraid her agenda will replace the one he's paid for with the politicians. Hijinx, like a snow boarding run right out of "Bridget Jones's Diary 2," ensue. One of the most surprising aspects of "Last Holiday" is its claim to foodie movie fame. Besides Georgia's home cooking, there is the fun of watching Depardieu play a celebrity chef in a Grandhotel kitchen. As he connects with Georgia, he confides that they both know the secret of life - butter. In fact, the hotel staff - dreamy hotel clerk Marie (Lucie Vondrácková), protective bellboy Felipe (Petr Vanek), masseuse Brigitta (Lucie Brezovska) and snoopy valet Gunther (Susan Kellermann, "The Devil's Advocate") - are all more enjoyable than the 'where-have-they-been' collection cast as Georgia's playmates (including the talented Alicia Witt (TV's "Cybil," "The Upside of Anger") as Kragen's employee/mistress, whose career has surely skidded off the tracks). Giancarlo Esposito is the only exception to this rule, lending the air of a seasoned pol with a conscience to his Senator. It's Latifah, though, who makes this worth watching. She reins her big personality in and is winning and effortlessly believable as an everywoman with a scrapbook full of 'possibilities.' She gives a measured performance, only gradually allowing her character to become more forceful and never, ever taking her too far. LL Cool J adds some warmth as a nice guy slow to realize what's under his nose. While the script is fairly faithful to the original, with its message of taking chances in life (contrivances and all), the film doesn't maintain an even tone. Wang lets a nice moment of observation or a canny bit of comedy butt up against broad slapstick or makeover montages we've seen a hundred times before. Wang even misses an opportunity to use the phrase 'Act of God' in a third act scene which would have made ironic rebut to his heroine's self-pity bouts. The film feels directed by happenstance. "Last Holiday" is an easy sop to mainstream audiences during the winter doldrums, a star vehicle whose star deserves a far classier ride.

Georgia Byrd (Queen Latifah) is a hard working, but shy and soft-spoken, employee at the Kragen department stores New Orleans location. She keeps a secret Possibilities” book in which co-worker Sean Matthews (LL Cool J) plays prominent. An attempt to overcome her shyness with Sean results in a bumped head, then a cat scan that shows she is dying. With only three weeks to live, Georgia decides to cash in all her savings for one, “Last Holiday.” In 1950, Alec Guinness (as George Bird) created the indelible character of a man, suddenly facing imminent death, who takes one last holiday and ends up finding a life worth living. The original “Last Holiday” was such a sweet, sometimes melancholy, film, with a wonderful star and supporting cast, that it makes me wonder why anyone would even try to remake it. After seeing the remake the question still stands. It’s not that the new “Last Holiday” is a bad film. It is just a bland one. Queen Latifah is a likable personality but her strength is in being a strong, dominant character – totally unlike Georgia. This is one of the weaknesses of the movie as Georgia, after receiving the bad news, simply spends her hard-earned savings to find happiness. Money can buy anything seems to be the point of this mild, innocuous little comedy. It takes about 30 minutes for the holiday portion of Last Holiday” to kick in. During this initial phase Georgia goes about her business – working as an unassuming sales associate at Kragen’s – and her passion – cooking. All the while, she serves her elaborate culinary delights to her neighbor, Darius (Jascha Washington), and starves herself on Lean Cuisine. She harbors a huge crush for co-worker Sean but when she finally decides to act on it she ends up in the store’s infirmary with a severely bumped noggin. Company physician, Dr. Gupta (Ranjit Chowdhry), eager to play with his new, but well used, CT scanner runs tests on Georgia’s bumped head but is aghast to learn that she has Lampington’s disease. He gives his patient just three weeks to live. The bad news proves a catalyst of change for Georgia and she cashes in her all of her retirement funds for one last hurrah. She packs her bags and heads off to Karlovy Vary in the Czech Republic, the base of her favorite chef, Didier (Gerald Depardieu), at the Grand Hotel Pupp. Because of a mix up in reservations, Georgia throws caution to the wind and takes the posh Presidential suite to the tune of $4000 per night. This extravagance becomes the buzz of the hoteliers who wonder about the mysterious rich lady. Other guests at the Pupp include, as it happens, Georgia’s big boss, Matthew Kragen (Timothy Hutton), Senator Dillings (Giancarlo Esposito) and Congressman Stewart (Michael Nouri), who have assembled at the grand hotel for some secret wheeling and dealing. They, too, wonder about the rich single lady who has become the subject of Chef Didier’s attention. The rest of the film deals with uncovering the mystery, self-realization (on several levels) and, as a side story, hope for Georgia – in both love and health. Director Wayne Wang, early in his career, created such charming films as “Dim Sum” and “Eat a Bowl of Tea.” Since then, though, his works have become more commercial and generic – see “Maid in Manhattan” and Because of Winn Dixie” as examples of his more recent films. “Last Holiday” falls in with the latter movies as a likable, predictable and mildly amusing romantic comedy that is short on both romance and comedy. The script, by Jeffrey Price and Peter S. Seaman (adapting J.B. Priestley’s original 1950 screenplay), lacks the charm and whimsy of the earlier work, leaving us with a by-the-numbers, manufactured venture. Implausible concepts – like Georgia ordering all of the many specials offered by Chef Didier, all in one sitting – keep things light and non-involving, resulting in the expected “happily ever after” finale. The list of telegraphed plot lines and many clichés makes “Last Holiday” the kind of film that starts off mildly entertaining but, as it unrolls its 112-minute run time, I just wanted it to be finished. The 1950 original was only 89-minutes long and there is little reason why the remake should run so much longer. The cast, besides Latifah and Depardieu, is made up with a who’s who of where-the-heck-have-they-been actors. Best Supporting Actor Oscar winner for Ordinary People,” Timothy Hutton, does nothing as the conniving businessman, Kragen. Giancarlo Esposito, someone whom I have always thought a fine actor, picks up a paycheck as the possibly corrupt senator. Michael Nouri (remember him as the hunk in “Flash Dance”?) is window dressing only. Alicia Witt, a promising young actress when she played Cybill Shephard’s smart aleck daughter on TV’s “Cybill,” does nothing here. LL Cool J, as love interest Sean, is likable but not of any note. If the mostly femme audience attending the screening is any indication, “Last Holiday” may have some shoulders with that demographic. But, it left me less than satisfied.