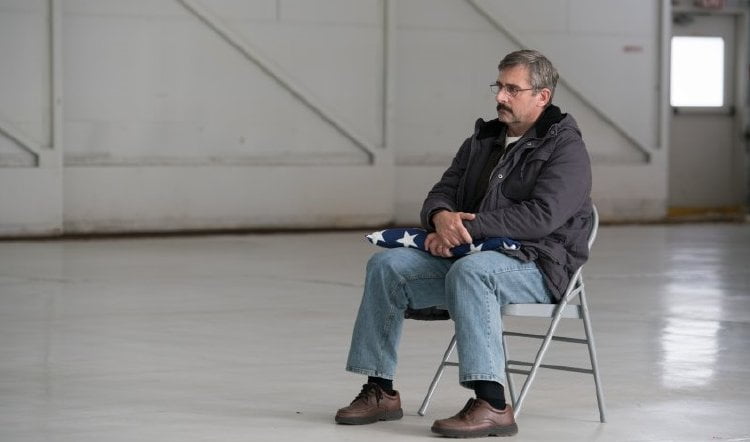 Larry “Doc” Shepherd (Steve Carell), is a dad who lost his son in the early days of the Second Iraq War. Larry Jr. is coming home to full military honors for heroism and burial at Arlington National Cemetery. When Doc learns the truth of his son’s death, he asks his two Vietnam War buddies, Sal (Brian Cranston) and Richard (Laurence Fishburne) to help him take his boy home to New Hampshire in “Last Flag Flying.”

One night as Sal Nealon (Bryan Cranston) boozes with one of the regulars in his shabby bar, a meek man who's quietly ordered a beer notes that he doesn't seem to remember him. Sal's astonished to recognize Larry 'Doc' Shepherd (Steve Carell), a Vietnam buddy who'd spent time in the brig for an episode that shames them both. Doc asks Sal if he'll drive him somewhere, surprising him with the revelation that Richard 'The Mawler' Mueller (Laurence Fishburne) is now the Reverend of a Pennsylvania Baptist Church. But it is not until they are seated at Ruth Mueller's (Deanna Reed-Foster, "Southside with You") Sunday dinner table that Doc asks them if they'll accompany him to pick up the body of his son, killed in Iraq, in "Last Flag Flying." Cowriter (with the novel's Darryl Ponicsan)/director Richard Linklater ("Boyhood") claims that while the book his film is based on is a sequel to the one adapted for Hal Ashby's 1973 "The Last Detail," his film is not, yet it's easy enough to trace his characters back to that film's, Cranston in the Nicholson role, Fishburne the late Otis Young's, Carell the naif played by Randy Quaid. But other than encouraging those who haven't seen Ashby's film to see it on general terms, it's entirely unnecessary as a prelude to Linklater's funny, moving road trip. Sal is the profane court jester, a womanizer who drinks, smokes and loves jabbing at Mueller's newfound, to him at least, piety, finding even his God given name of Richard hilarious. He's much gentler with the man who paid for their crime, at least until confronted with an Army lie. Mueller, who walks with a cane because of a wartime injury, is shamed by his wife into accompanying the men, butting heads with Sal until the man's reckless driving evokes a tirade of obscenities much to Sal's delight. Doc, who stayed in New Hampshire's Portsmouth long after being released from its brig, is visibly weighed down with sadness, having lost his beloved wife earlier in 2003 to cancer, yet not wishing to put his old buddies out. After a mistaken arrival at Arlington National Cemetery, the trio reroute to Dover Air Force Base in Delaware where they learn Doc's son's body will be arriving the next day, forcing the three into a shared motel room for the night. The next day, Sal's request to view his son is strongly discouraged by Colonel Wilits (Yul Vazquez, "Captain Phillips") because of the damage done by a bullet entering the back of his head. This immediately casts suspicion on the army's version of how Doc's son died. Sal and Richard question Lance Corporal Charlie Washington (J. Quinton Johnson, "Everybody Wants Some!!"), who turns out not only to have been at the scene, but Larry's best friend. Absorbing the truth (at Sal's insistence, Richard favoring the hero story as more compassionate), Doc decides his son will be buried in Portsmouth in his high school graduation suit and refuses the Army's help in transporting the casket. What follows is a strange adventure that includes a near arrest by Homeland Security at the hands of a UHaul Rental Agent (Jane Mowder, "Foxcatcher"), a missed Amtrak connection in New York City when Sal decides they all need cell phones, and a Boston visit to Mrs. Hightower (Cicely Tyson, "Sounder," "The Help"), the mother of the man they all failed thirty years prior. Each man is profoundly changed, their protege Washington, tasked with accompanying the casket, quietly absorbing wartime's effects on the older men as he gently steers Doc towards recognizing his son's commitment to the Marines. Cranston has the flashiest role and injects the melancholy film with regular does of humor, but it is Carell's depth of sadness which is most affecting, his physical carriage a hushed retreat from life. Fishburne's sanctimonious veneer is gradually stripped, leaving a more well balanced pastor. Johnson is eminently watchable, his uniformed dignity guiding his elders' wayward trip. Even though the names have been changed, "Last Flag Flying" is a beautiful followup to "The Last Detail." It's also heartfelt, touching and a beautiful tribute to American veterans and the families too many leave behind. Grade:

Director Richard Linklater and co-writer Darryl Ponicsan adapt Ponicsan’s novel of the title and it is a funny/sad story about friendship, family and the loyalty of a band of brothers. Larry is a tragic figure who lost his wife only months before and he must face the emotional return of his Marine son’s body. While the road trip format the film uses if very familiar, what happens during their trip home is not. Darryl Ponicsan’s 2005 novel is actually the sequel to his 1970 work, The Last Detail, which was also made into a film in 1973, starring Jack Nicholson. The names, character and mission are changed in “Last Flag Flying” with its story of taking our own back home. Thinking about it, I do not want to go into the well-written, full-bodied story of men bonding at the time of war and of great loss. The stellar cast bring to life the characters we get to know so well as Larry, Sal and Richard go to Dover AFB to receive Larry Jr. There, they meet the young Marine, Washington (J. Quinton Johnson), who was with Doc’s son when he was killed. He was also the dead Marine’s best friend and is escorting him home. This is truly a cast of equals with each of the four main characters having their own baggage and burdens as they journey from Washington, New York City and Boston to their final port of call, Portsmouth, NH and Doc’s home. It is a pleasure watching three veteran performers create believable characters that you really care about. Hitherto relatively unknown J. Quinton Johnson proves up to the challenge of playing opposite his iconic costars and gives a strong performance as escort and friend of Larry Jr. There are many emotional issues discussed, in earnest and with humor, about those defining moments in each man’s life. War may be hell for those fighting but the bond that forms between men in battle spans many generations, even millennia. This is a road trip you want to take.