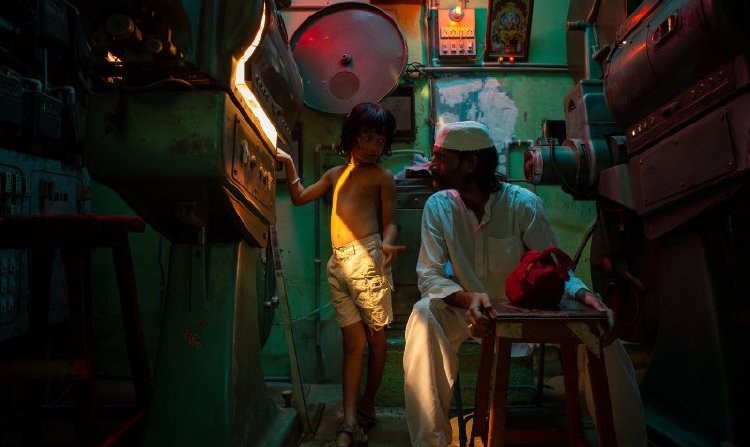 Nine year-old Samay (Bhavin Rabari) is thrilled to be going on a family trip into the city to see his first movie but confused as to why his father Bapuji (Dipen Raval) is allowing it.  Dad, a poor tea seller at a remote, rural train station, considers cinema beneath their Brahmin caste, but is making an exception for a religious picture about the Indian goddess Kali.  But dad has opened Pandora’s Box and Samay becomes obsessed with everything about movies, creating his own makeshift theater with his young cronies in a ghost village and stealing away as protégé to Fazal (Bhavesh Shrimali), the Galaxy cinema projectionist, in “Last Film Show.”

The love of cinema itself has been the subject of such movies as 1957’s “The Smallest Show on Earth” to this year’s “Empire of Light,” both from Great Britain, but the movie “Last Film Show” is going to be constantly compared to is Italy’s 1988 “Cinema Paradiso,” another movie about a young boy’s friendship with a projectionist.   But writer/director Pan Nalin’s (writer, “Samsara”) semi-autobiographical film delves more deeply into the essential elements of cinema itself, reveling in light and shadow, silver nitrate film and the mechanics of projecting it.  And because Samay first earns a space in Fazal’s projection booth by bartering his mother Baa’s (Richa Meena, a beauty and the essence of maternal, unconditional love) lunchbox, Nalin’s lovely tribute to his own mother’s cuisine also gives it standing as a food movie.

Shooting in widescreen 35mm, director of photography Swapnil S. Sonawane’s first images place the small boy in vast, green fields, a plane in the sky overhead and a train rushing by his only connections to the outside world (the train, it should be noted, is another essential element of cinema, the Lumiere Brothers’ “Arrival of a Train at La Ciotat” creating a sensation in 1896 and one of many cinema tributes Nalin has embedded within his film).  Once exposed to the flickering images of colorful dancers on the big screen, though, Samay keeps sneaking back to the theater.  He also keeps being thrown out by its manager (Paresh Mehta) and dad awaits his return at the station with a heavy branch for thrashing, a scene Sonawane captures comically in profile long shot, dad chasing Samay followed by all of Samay’s friends like an old Keystone Kops routine.

But Samay keeps going back and when he begins to eat his lunch outside the Galaxy, draws the attention of Fazal, who admires the thinness of Samay’s mother’s chapatti.  A deal is struck and Samay not only gets his fill of free movies, but becomes an unpaid apprentice, helping Fazal spool down reels of films and thread them through the machinery of the massive projector.  Back home, when he isn’t running glasses of tea to train passengers, Samay and his pals experiment with light, refracting it with mirrors onto walls.  Then one day Samay realizes that films are stored in the station’s parcel room on their way to big cities and he and his pals’ theft of actual film reels leads to DIY ingenuity to project them.

At its heart, “Last Film Show” is a coming of age movie, Samay’s teacher Mr. Dave (Alpesh Tank) advising the boy to ‘learn English and leave Chalala’ even as his father, whose own livelihood has been continually slipping away, appears blind to his boy’s future.  But even Samay’s big city dreams are in for a rude awakening, technology marching forward (in the film’s only misstep, Samay’s aide to his old friend Fazal after he loses his job seems ill-advised, given what we’ve learned), but Bapuji witnessing just what his son has accomplished with smarts and passion spurs a change of heart.

In a somewhat off key sequence, Samay guides us through the heartbreaking process of film being broken down, silver extracted from nitrate for cutlery, acetate used for bangles.  But while it is somewhat inexplicable how the young boy would have access to all this industry, Nalin segues to a glorious sequence, Samay departing on a train full of beautiful young women whose color-coded bangles he matches to the directors (Desai, Bachchan, Ray, Kubrick, Lean, Tarkovsky…) whose films’ souls live within them, a cinema homage far more moving than Damien Chazelle’s “Babylon” capper.

Against his father’s (Dipen Ravel) warnings, nine-year old Samay (Bhavin Rabari) wants to capture the light and make movies. He cuts a deal with the projectionist of a rundown movie house – trade his lunch for free movies – and begins his brand new career as a filmmaker in the “Last Film Show.”

“Cinema Paradiso (1988)” go eat your heart out. That is just one of the thoughts I had as I watched writer-director Pan Nalin’s lovely homage to movies and storytelling from the eyes of dedicated young Samay. After the boy sees his first Bollywood movie, he is smitten with the medium and vows to make movies. Dad has very different ideas, with beatings rating high in the equation, but Samay defies him – with a little help from his loving mom (Richa Meena).

What starts out as a boy’s newfound obsession with all things cinematic, slowly shifts and changes as Samay wants to project movies and please the masses. The inventiveness of how he goes about doing the difficult task, despite all the obstacles, is charmingly whimsical as he brings cinema to his tiny village.

The inventiveness of the story, as Samay figures out all the hard stuff in projecting film, is shown in a amusing way as he uses spit, tape and glue to build a projector – and to get it to work! How a young kid can figure out the intricacies and nuance of film projection with scraps and baling wire? Well, do not ask, and simply accept (suspending disbelief) that a nine-year old youngster is resourceful and smart enough to pull it off.

This is a magical world of light and sound as Samay lives his dream and earns his father’s respect. It is nice, sometimes, to see the world through a child’s eyes.

Samuel Goldwyn Films released “Last Picture Show” in select theaters on 12/2/22.  It is available on VOD and expanding theatrically in January 2023.