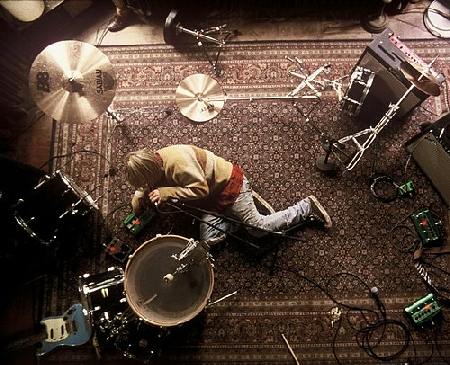 It's a long ... lonely journey ... from death to birth "Death to Birth," Michael Pitt Blake (Michael Pitt, "The Dreamers," "The Village") wanders through woods, rambling incoherently. He returns to a large house where others alternately sleep and act as his shields to the outside world. He eats cereal with milk found in a container on a counter. He talks to a Yellow Pages salesman (Thadeus A. Thomas). He makes macaroni and cheese. He's asked for advice on a song but jams alone. He cuddles a kitten in his absent daughter's room. These are Blake's "Last Days."

Writer/director Gus van Sant ("Gerry," "Elephant") concludes his 'death' trilogy with this fictional imagining based on the last days of Kurt Cobain. Taking events heavily covered by and speculated about in the media, Van Sant and his director of photography Harris Savides have turned the stories of a single killing, a mass murder, and now a suicide into dreamy meditations composed from non-judgemental observations. "Last Days," though, is touched by something more, almost spiritual, with its church bells and final scene of Blake's spirit ascending from this earth by way of a ladder. Other subtler bits of commentary are to be found as well, like Blake seated beneath a picture of a horse being taken down by hounds, or the prominent use of Velvet Underground's "Venus in Furs." As Blake wanders about the woods or mumbles to himself while cuddling a kitten in his daughter's bedroom (what is it with rock stars and kittens that never appear to be cared for?), Van Sant occasionally cuts away to the people in his sphere. Scott (Scott Green) and Asia (Asia Argento, "George A. Romero's Land of the Dead") are asleep in another room of the rambling house. Later they and Luke (Lukas Haas, "Mars Attacks!") invite a pair of Church of the Latter Day Saints elders (Andy and Adam Friberg) in for a conversation, then head out for the evening. Van Sant uses, albeit to a far lesser extent, the same time-looping technique he employed in "Elephant," most notably to track back to Blake's reality while his roommates return from a night out and begin to listen to "Venus in Furs." It is disorienting this time, though, because the lyrics being sung the first time we see Scott attempt to talk to Blake are not the same ones being sung when we get Blake's point of view. Scott says it's cold in the house and that he needs money and a jet heater. Luke asks Blake for advice on a song he's writing, but Blake tells him the great man should not be bothered. Scott's a user and enabler, the perfect rock star hanger-on. Later, a record executive played by Sonic Youth's Kim Gordon tries to shake Blake out of his stupor. 'Do you say I'm sorry that I'm a rock 'n roll cliche?' she asks about his daughter. The film's best scene is a single extended shot (the film is a series of such shots, which highlight its observational feel, as does sound designer Leslie Shatz' use of background noise) from outside of Blake's home looking in through its windows as Blake builds a tribal piece of music (an impressive composition and piece of musicianship by Pitt called "That Day"). We can observe Pitt moving about the room, from one window to the other, as leaves are reflecting rippling on the glass. It's a beautiful piece on an artist creating a work in his own solitary space. 'Blake's' identity as Cobain can be found in the bare bones of what is known about early April 1994 and Michael Pitt's costuming (Michelle Matland, "Someone Like You"). Blake is at his established old mansion (the film was shot at Castle Rock Estate in Garrison, New York). He has a wife and daughter who are in L.A. A private investigator (Ricky Jay, "Heist") is snooping around the property. There is a separate standing greenhouse/garden room at the back of the property. All of the clothes Pitt is seen wearing are items that Cobain has been photographed in - a fur trimmed parka, a red and brown striped sweater, cats eye sunglasses, even a black slip. Drug use is implied by Blake's semi-coherent state and possibly by a box he digs up in the garden, but it is not shown. Neither is the pulling of the trigger - it is only heard. (There are those who dispute that Cobain's death was a suicide. See "Kurt and Courtney" or the website JusticeforKurt.com for more information.) It's probably a stretch of the imagination to suggest that the blood which disappears and reappears around Blake's body in final scenes is symbolic of conflicting police reports. "Last Days" is ultimately a lyrical look at the life of an artist. It's a well-honed technical achievement as well, a movie that's photographed, recorded and edited into an organic poem.

Filmmaker Gus Van Sant has always followed his own course ever since 1985 feature debut, “Mala Noche.” His most recent films, “Gerry” and “Elephant,” were both hypnotic and, to many, baffling with long, lyrical camera shots of people walking and nothing much happening for most of the films. These are experimental works and the director completes his trilogy with a fictional look at someone who strongly resembles Kurt Cobain in “Last Days.” Last Days” begins with Blake (Michael Pitt) wandering through the Northwest wilderness wearing an institutional robe and pajamas. Face unseen and muttering inaudibly, we watch the young man as he immerses himself into an icy stream then make his way to an old manse gone to serious seed. Once there, he stuffs his gullet with Cocoa puffs and pads around the place in oversized boots, heavy coat and a woman’s full slip, murmuring all the while. Friends and colleagues wander in and out of the big house but none, save one girl, knows that Blake is there. One of the visitors, Donovan (Ryan Orion), who may be Blake’s manager, even hires a private detective (Ricky Jay) to try to find the man who is right under his nose. This gives Blake a spectral quality that indicates that he is no longer of this world and is in the nebulous zone between life and the hereafter. Last Days” is a meditation of a life destroyed by fame, drugs and overwhelming responsibility as we watch the last hours in the life of a famous but deeply troubled musician. As with his previous two films, Van Sant is in minimalist experimental mode with little intelligibly said by the main character as he wanders around his isolated and seedy home. Nothing earth shattering happens during the course of “Last Days” where a major event is a visit by the local Yellow pages salesman (Thaddeus A. Thomas) or by a pair of Seventh Day Adventists brothers (Adam and Andy Fiber). The filmmaker says that life, even among the famous, can end on ignominious and lonely terms. This is a tough role well handled by Michael Pitt whose resemblance, dress and mannerisms are closely aligned with the real life Kurt Cobain. One of the high points in Pitt’s performance comes when he, alone and playing all of his instruments at hand, builds a tune that is mesmerizing in its construction. Other scenes, when nothing really happens, are done with a hypnotic quality and the whole film is like a quietly staged train wreck – nothing much happens until the final, inevitable disaster. Van Sant’s fictional interpretation of Cobain’s end is aided by Tim Grimes’s interesting art direction, a combination of opulence and squalor. The fluid camera work, by Harris Savides, glides through the huge, rundown house with its falling plaster and grungy rooms to very expensive oil paintings hung amidst the mess. Blake’s bizarre combinations of clothing, by Michelle Matland and Allan McCosky, are imaginative and unique. Last Days” is not going to have explosive box office and will likely appeal to a very narrow niche or two - for those interested in a fictional interpretation of the demise of Cobain or fans of Gus Van Sant’s latest experiments in filmmaking. The slow pace, lack of real dialogue or “story,” constantly moving camera and no real explanation will keep most people at arm’s length, much like Gerry” and “Elephant.” I, personally, am intrigued by the helmer’s guts to experiment when he could make a tidy living doing mainstream film. This one is for film buffs and the curious.